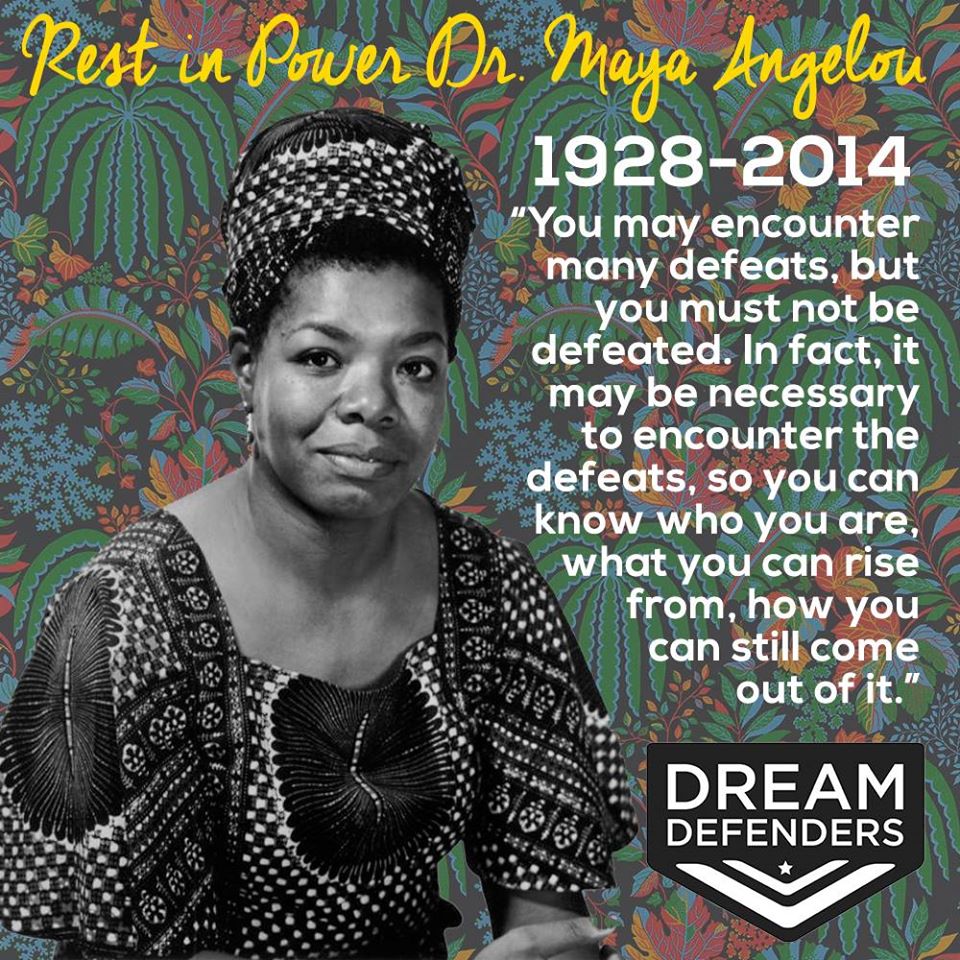 Maya Angelou had to be the name of a poet. It is too perfect, too lyrical to fit any other personality. Born on April 4, 1928, as Marguerite Johnson in St. Louis, Missouri, she blazed an incandescent streak across the heavens as the voice of memory – as poet, actress, author and activist.

She taught generations of students as an honored professor of literature. As a young woman, she struck the boards as an African dancer. And she was a close friend and colleague of Malcolm X, working briefly as a leading member of his post-Nation of Islam grouping, the Organization of Afro-American Unity.

During the early ‘60s presidency of Kwame Nkrumah, Ghana attracted activists from around the world, especially Black Americans. Maya Angelou would be among them, making West Africa her home. There she would meet Malcolm again, tanned dark by the African sun, goateed and fresh from his Hajj to Mecca, appearing at her door.

The assassination of Malcolm X seemed to be a turning point in her life, for it seemed like the work of crazy people, she said. She got a call while visiting a relative in San Francisco as the news of Malcolm’s fate numbed her into shock.

Her brother appeared at the house unbidden and drove her away. As they walked the city’s Black district, then the Fillmore,* the conversation was about Malcolm, but decidedly negative. “He got what he deserved,” said one. “Serves him right,” said another. Her brother turned to her and said, “These are the people that man died for.”

She would thereafter write, mother, teach and mentor. Her autobiography, “I Know Why the Caged Bird Sings,” a tale of childhood betrayal, vengeance and death, would be joined by works of poetic wonder, light and hope.

Maya Angelou had to be the name of a poet. It is too perfect, too lyrical to fit any other personality.

Her majestic contralto would lend a presidential inauguration a nobility it did not deserve when she delivered “On the Pulse of the Morning,” reciting, “History, despite its wrenching pain, cannot be unlived but if faced with courage need not be lived again.” It seemed more fitting for her own extraordinary life.

She is the mother of Guy Johnson, a brilliant novelist.

*Editor’s note: In a tribute to Maya Angelou, San Francisco Mayor Ed Lee wrote: “Her ties to our City were also deep, having lived in San Francisco where she wrote about her experiences. She grew up in the Fillmore District, graduated from Mission High School, studied dance and drama, and became the first African-American female street car conductor in San Francisco.”

At 11, when so much of life fell apart for me and everything I thought I knew became dangerous and violent, my mama-teacher gave me “I Know Why the Caged Bird Sings,” and with every page turned I saw myself and I felt words and I dreamed images and I truly learned how it’s possible to write so much beauty out of so much pain. 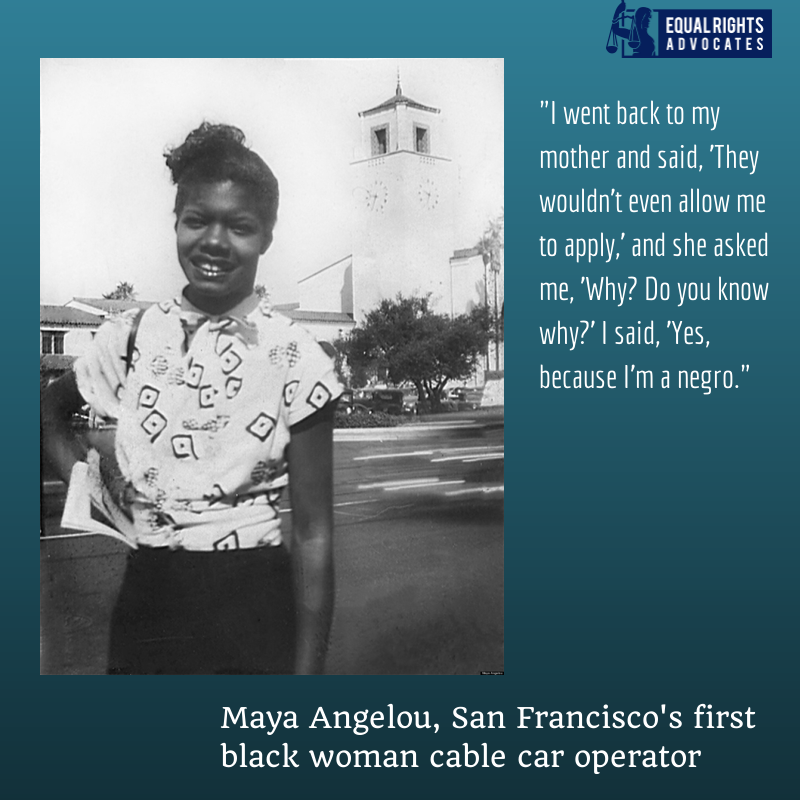 Throughout the years of me and mama’s struggle, we would return to listening to her words of poetic resistance carrying this poor single Black-Indian mama and daughter through more pain.

“You may not control all the events that happen to you, but you can decide not to be reduced by them.” – “Letter to My Daughter,” a book of essays (2009)

And then after so much, I was incarcerated for me and mama being houseless. Both of us seemed to fall apart, unable to pull ourselves up this time. But we did, knowing that if we could make it, we could begin to make some essential change, somehow.

“The need for change bulldozed a road down the center of my mind.” – “I Know Why the Caged Bird Sings”

This is when my mama began seeking out and learning back her own stolen pre-colonial Black-Raza and womens’ herstory, sitting in on classes taught by other fierce African warrior women and men like Dr. Chinosole, Ericka Huggins and Dr. Wade Nobles.

Me and mama began to read other great writers, like Toni Morrison, Zora Neal Hurston and Luis Rodriguez – bringing us words and images of liberation, revolution and transformation.

“You are the sum total of everything you’ve ever seen, heard, eaten, smelled, been told, forgot – it’s all there. Everything influences each of us, and because of that I try to make sure that my experiences are positive.” – Maya Angelou

Eventually, after more unbelievable struggles, too many to mention or reflect upon, me and mama launched the poor people-led, indigenous people-led movement that is POOR Magazine/Prensa POBRE, the words of inspiring fire that are Maya – always acting as a fountain of hope for both of us.

Whenever we felt beat down by the immensity of our life nightmare, we reflected upon her survival through rape as a child, racism in Amerikkka and self-imposed silence, only to realize that these experiences, no matter how horrible, were also her art. And, like Uncle Al Robles, ancestor board member of POOR, said, “Your struggle is the best part of your art, and your art is the best part of your struggle.”

“My mission in life is not merely to survive, but to thrive; and to do so with some passion, some compassion, some humor, and some style.” – Maya Angelou

From the beginning of POOR, we also dreamed, visioned and hoped for change led by us po’ folks, landless people’s movement in the stolen indigenous land that is Turtle Island. This deep tissue change, embedded with art, poetry and humility, was always rooted first in decolonization. This is what we call Homefulness.

To this day, beyond all the false borders, institutional cages and brutal systems that keep po’ folks poor and oppressed all across Mama Earth, we are determined to manifest a vision of change and resistance rooted in art, poetry and liberation. We have beautiful women warriors like Mama Maya and Mama Dee to thank for this. We walk in humility on their strong shoulders.

Maya Angelou, the esteemed poet, writer and actress, died Wednesday in her Winston-Salem home. The literary giant, most known for her autobiography, “I Know Why the Caged Bird Sings,” and “Phenomenal Woman,” a collection of poetry, was one of the foremost African-American writers and thinkers of her time.

But society often forgets her legacy as a fierce civil rights activist and someone who did not shy away from political controversy. Here are five facts you should know about Maya Angelou, the freedom fighter.

Carimah Townes is a special assistant for ThinkProgress. Previously, she worked for the National Center for Lesbian Rights and interned with the communications and development teams at Vital Voices Global Partnership. She can be reached via Twitter @CarimahWheat. This story first appeared on ThinkProgress.