A video purportedly released by the armed Boko Haram sect based in northeastern Nigeria showed what was said to be school girls who have been held by the group for a month. The Boko Haram leader said that the young women could be released in exchange for the prisoners belonging to their organization being held by the Nigerian government.

With the convening of the World Economic Forum for Africa in Abuja, the political capital of Nigeria, during the week of May 5, international media attention was focused on the country. The issue of internal security in Nigeria was also paramount since the detonation of two deadly bombs in Abuja during a three week period which resulted in the deaths of over 80 people.

Simultaneously, the story involving the missing high school students from the village of Chibok in Borno state in the northeast, which has been under a government-imposed state of emergency for months, was utilized to mobilize the intervention of military and intelligence personnel from Washington, London, Paris and Tel Aviv. The problems of the Boko Haram insurgency have existed since 2009 when the government deployed police and soldiers to attack the headquarters and residences of the group, which had functioned for several years with the public support of some prominent northern-based politicians.

The plight of the missing students is part and parcel of the overall security crisis inside the northeast region of the country which is spreading to Abuja and other areas. Thousands have been killed in the fighting over the past five years and many more have been displaced.

Despite Nigeria’s designation by Western-based financial publications as having the largest economy in Africa, there is still tremendous poverty and unemployment inside the West African state, the continent’s most populous. This wealth generated in the recent period has obviously not trickled down to the working class, youth and poor, since the country over the last two years has been the scene of strikes in the oil, medical, educational and public service sectors of the national economy.

The deliberations surrounding the World Economic Forum represented the same type of investment-driven approach to economic development in Africa. At the opening reception during the gathering, President Goodluck Jonathan welcomed the intervention of the imperialist states in resolving the return of the students and stated that “terrorism” would not interfere with the current political trajectory of the government.

The role of imperialism and the legacy of colonialism

The Boko Haram group is a manifestation of the regional conflicts in Nigeria that were inherited from the British colonial system and the continuing political dominance by the United States in the foreign and internal affairs of the oil-rich state. This year represented the centennial of the consolidation of colonial rule by Britain.

A system of indirect rule for decades left the country divided at the time of national independence in 1960. Two military coups in 1966 lead to a civil war during 1967-70, when a section of the national bourgeoisie in the southeast attempted to form its separate nation of Biafra.

Since the 1970s, a succession of both military and civilian governments have been largely dominated by military interests, most of which originate in the north of the country. The oil wealth is largely found in the southeast and increasingly offshore in the Gulf of Guinea.

Adding to this regional problem that has not been resolved since 1960, the Muslim population of Nigeria is heavily based in the northern region. Due to the policy of the British colonialists, many people from the northern region were recruited into the military and were utilized to suppress resistance to imperialism throughout the country.

Based upon these regional differences, which permeate the political parties and governing structures of the country, a cohesive administrative strategy remains elusive. The country is the largest exporter of crude oil from Africa into the U.S. Since 1956, the petroleum industry has been dominated by Britain, Europe and the U.S.

An editorial published May 7 by the Guardian, a leading national newspaper in Nigeria, stated in response to a memo written by Adamawa State Gov. Murtala H.Y. Nyako: “The indubitable truth is that insecurity in the land is transforming into a hydra-headed monster. That the president does not appear to grasp the gravity of the problem his administration and the country face is daily advertised by his sometimes frivolous words and deeds.” 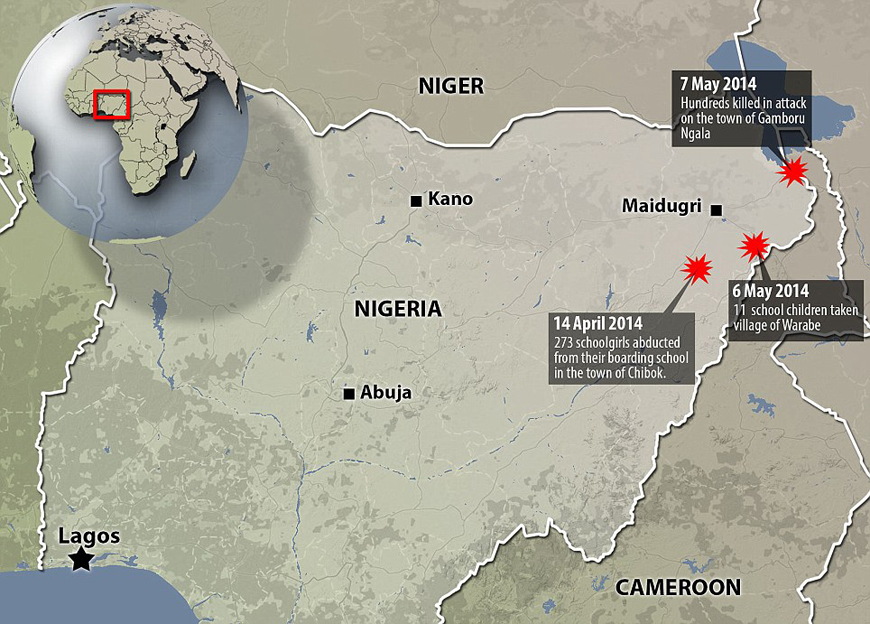 The editorial goes on, saying: “Many Nigerians now find no reason to believe that this government has their ‘security and welfare’ as its primary job. Nyako may have used a wrong medium and foul language; [nonetheless,] his frustrations resonate with most Nigerians. President Jonathan should do all within his enormous presidential powers to prevent a groundswell of popular anger against his government.”

Jonathan, who comes from the Ijaw ethnic group based in the south, is facing re-election in 2015 amid the worsening security crisis inside the country since the 1960s. During the 1990s, an insurgent group called the Movement for the Emancipation of the Niger Delta (MEND) came into existence demanding adequate compensation for the southern region where oil is exploited.

MEND, which has condemned the abductions of the high school students, engaged in sabotage operations against the oil industry and presented an effective public relations campaign that accompanied its actions. Their efforts were coupled with mass demonstrations by women and youth also demanding that the large Western-based oil firms such as Shell-BP, Chevron and ExxonMobil clean up the environmental damage in the southern region and invest profits into the structural development of the Niger Delta.

MEND was later offered an amnesty which included monetary compensation, scholarships and other amenities. The armed actions in the southern region have declined significantly but security still remains a serious concern.

However, the Boko Haram campaigns have targeted civilians and Christian churches. They also claimed responsibility for the bombing of the United Nations offices in Abuja during 2011.

‘Terrorism’ and imperialism in Africa

There have been many questions raised about the origins and support for Boko Haram. Some informed Nigerians claim that the group still maintains support among sections of the northern political and economic elites.

The tactics of the group have shifted since 2009 as well. They have suggested an alliance with Al-Qaeda, and the character of the violence carried out inside the country in the northeast and other areas is strikingly similar to the bombing operations in other countries such as Iraq.

Interestingly enough, the U.S. administration under President Barack Obama had refused to label Boko Haram a terrorist group even after the U.N. bombing. Hillary Clinton, who was secretary of state at the time under Obama, has been seen making statements of concern about the missing children; however, during her tenure with the administration she would not categorize Boko Haram as a terrorist organization.

These actions by Boko Haram and the failure of the Jonathan administration in Abuja to effectively respond has provided the imperialist states, led by the U.S., an opportunity to deepen their involvement inside the country. Just recently joint naval operations in the Gulf of Guinea between the Pentagon and several West African states, including Nigeria, were conducted as part of the U.S. Africa Command (AFRICOM) and European Union Forces (EUFOR) interventionist project.

Another article, published May 11 in the Nigerian Guardian by Laolu Akande, states: “Sen. Susan Collins, a Republican from Maine, is leading 20 female U.S. senators to demand U.S. military assistance. In an interview with CNN last week, she specifically asked for Special Forces operations. At a global press conference, also in Washington, D.C., about the same time, Christian Association of Nigerian-Americans (CANAN) leaders also made the request that Special Forces be deployed to Nigeria to rescue the Chibok girls.”

This same article goes on to report: “According to Collins, ‘I would like to see Special Forces deployed to rescue these young girls.’ And later at an international press conference in Washington, D.C., the president of CANAN, Dr. James Fadele, on behalf of the association asked the U.S. president to consider ‘sending Special Forces units as already suggested by sitting U.S. Sen. Susan Collins. CANAN added that the ‘U.S. should use every available tool within its arsenal to trace, track and terminate’ Boko Haram operations.”

These statements by leading members of the U.S. Senate and spokespersons who claim to represent the sentiment of the Nigerian expatriate community must be viewed in conjunction with the role of the corporate and government-controlled media based in the West. An upsurge in demonstrations of outrage and shock is portrayed as a means of justifying imperialist military intervention in Nigeria.

Yet the recent history of these interventions led by the U.S., France and other NATO states along with Israel shows they have not brought about peace and security in Mali, Sudan, Somalia, Kenya, Libya and other affected regions. The problems of internal security within Nigeria must be viewed within the context of the inherited capitalist relations of production, the burgeoning class divisions within the society which imperialism fosters, and the need for a genuine national democratic revolution and socialist economic construction.

It is the quest for dominance by the imperialist states which motivates their actions towards Nigeria and other African states. Anti-war, social justice, women’s and human rights organizations must take into consideration the potential impact of a deeper and longer-term military and intelligence intervention in Nigeria.