The plan to privatize and sell our public housing projects in San Francisco and across the nation is harmful to the poor, elderly and disabled, including the thousands of union workers who have spent years maintaining our public housing units.

As recent as Jan. 31, 2014, the San Francisco Housing Authority (SFHA) invited developers and nonprofit organizations to become partners in the scheme to privatize and rehabilitate 3,491 occupied public housing units grouped into eight clusters throughout San Francisco, as part of the RAD privatization project, over a three year period.

Under a federal program called Rental Assistance Demonstration (RAD), a scheme to privatize and sell many of San Francisco’s public housing units is moving forward.

The above mentioned developers are all presently seeking an exclusive negotiating rights agreement (ENRA) that would allow them to take over and exploit 3,491 of San Francisco’s public housing units.

Not only are public housing tenants at risk of being displaced from their housing, union workers are also at risk of losing their jobs once RAD is implemented.

Since September, public housing activist and tenant Lisa “Tiny” Gray-Garcia of Poor Magazine has brought other tenants community activists to City Hall in San Francisco to protest against the implementation of the RAD program and the privatization of our public housing. A major campaign to stop the eviction of Plaza East resident Sabrina Carter and her sons was tragically unsuccessful.

According to the minutes of a Jan. 15, 2014, SFHA Commissioner’s meeting, Jet Chapman, an SEIU 1021 representative, expressed concerns about RAD and asked the commission to vote against the item. Renita Mason, SEIU 1021 chapter member, wanted to know the impact of RAD. Marvin Harrell worried about the impact of the RAD program on the morale of the employees.

Bill Blackwell, representative of Local 38, expressed concerns with the communication to the unions regarding the RAD program. Others spoke to a range of concerns: Cherice Jackson on the effect of the RAD program; Ace Washington on communication with staff and tenants about the program; Frank Po on recommending that the tenants support the Housing Authority staff; David Canham, SEIU 1021 representative, on communication between the agency and the unions; Rosa Asana, Public Housing Tenants Association (PHTA) board member and president of Westside Court, on how the authority could ensure nondiscrimination if the RAD program is adopted; Alasabeth Alexander, vice president of politics for SEIU, on the elimination of 200 middle class jobs if RAD is implemented.

Not only are public housing tenants at risk of being displaced from their housing, union workers are also at risk of losing their jobs once RAD is implemented.

Presently some 200 union members, mostly maintenance workers, are also threatened with losing their jobs at the Baltimore Housing Authority once the RAD program is implemented there. More than 4,000 out of 11,000 public housing units are scheduled to become privatized under the RAD program in Baltimore.

Congress allows 60,000 public housing units to be privatized under RAD

Congress authorized the conversion of 60,000 public housing units to be privatized and sold under the RAD program by Sept. 30, 2015, and HUD’s FY14 budget request seeks to expand the demonstration program to 150,000 units.

A March 13, 2014, memorandum from the Berkeley Housing Authority (BHA) announced that the disposition project to privatize and dispose of Berkeley’s 75 public housing town homes closed Feb. 14, 2014. According to the BHA, a notice dated Feb. 11, 2014, was sent out to all current public housing residents advising them of the transfer of ownership of their public housing units to Related.

However, the deal to privatize Berkeley’s 75 public housing town homes just became a whole lot more complicated as of March 17, 2014, when United States Attorney for the Southern District of New York Preet Bharara filed a civil rights lawsuit in federal court against the Related Companies, Inc., owned by billionaires Jorge M. Perez and Stephen M. Ross, for being engaged in a pattern and practice of developing rental apartments that are inaccessible to persons with disabilities in New York City and elsewhere.

Manhattan U.S. Attorney Preet Bharara said: “We will not allow developers and architects who deprive people with disabilities of accessible housing to evade the consequences of their failure to comply with clear, long-standing federal civil rights laws. When developers demonstrate an unwillingness to design and construct accessible housing in accordance with federal law, this office will not hesitate to use its enforcement tools to compel the developers to make both their preexisting and future constructions accessible.

“To ensure that Related’s current and future residential housing developments are accessible to people with disabilities and to redress its history of non-compliance with the Fair Housing Act, the United States seeks a court order enjoining Related from designing and constructing multi-family housing, such as 15 Hudson Yards, without the accessibility features required by federal law and requiring Related to retrofit the inaccessible conditions at all the rental properties it has developed to make them accessible. The United States also seeks damages for persons harmed by Related’s unlawful practices and a civil penalty to vindicate the public interest.”

A list of public housing developments across the nation to be privatized can be found at http://portal.hud.gov/hudportal/documents/huddoc?id=radreservations1_16_14.pdf. 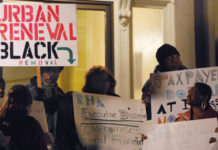 Eviction attorney Charles Ramsey wants to be Richmond’s next mayor

Democrats cave in to another round of sequestration budget cuts

‘I Heard That’: Black Media Roundtable with Mayor Lee; The State of Black San Francisco …