by Anh Le Ms. Verlie Mae Pickens celebrated her 98th birthday with friends and community members in grand fashion on June 11 at the Dr. George Davis Senior Center. Dressed in her favorite lilac colored fashion and hat, and beaming with great joy and pride, Ms. Pickens was honored in a festive birthday celebration. Ms. Pickens, a longtime Bayview resident, was born on June 11, 1916, in Lake Charles, Louisiana, to Thomas Alfred Nisby and Lillian Lumpkin Nisby. There were six girls and two boys in her family. Ms. Pickens grew up on a farm. Fresh vegetables and chickens were raised on her family’s farm. She remembers how her father carried the oil lantern while it was still dark to go feed the chickens. One of her jobs on the farm was to go pump the water at the well and carry the buckets of water. There was no indoor plumbing at that time. There was an outhouse on the farm. Clothes were washed by hand. At her family’s house, there was a kerosene heater. There was a wood stove. In the early years in Lake Charles, there were no cars and no paved streets. In her family, breakfast was served early each morning. Supper was also served early. Ms. Pickens, her siblings and her parents gathered around the dining table for every meal each day. Her parents taught their children, “Early to bed, early to rise makes a person healthy, wealthy and wise,” a philosophy and lifestyle she lives by. Ms. Pickens attended school in Lake Charles and graduated from high school. Besides her studies, she liked sports and played them, including tennis. She loves music and singing. She played the piano in her church choir for several years in her hometown. Ms. Pickens was married in 1936. She left Lake Charles in 1940 to move to San Francisco. At that time, there was deep racial discrimination against African Americans in San Francisco. There were barriers to finding a job. She moved to Los Angeles and worked in the airplane building industry at Lockheed. She moved back to San Francisco in 1945. In 1947, she remarried, to Samuel Pickens from Lake Charles. Ms. Pickens has worked hard all of her life. Her first job in San Francisco was with a medical doctor. She also worked for a candy company for many years. During her happy marriage and life together with Mr. Pickens, Ms. Pickens and her husband liked to travel, visiting every state in the United States except for Rhode Island.

Ms. Pickens enjoys visiting her friends and her two sisters. She has grandchildren, great grandchildren, nieces, nephews, great grandnieces, great grandnephews. She and her family are planning for a family reunion this year. Ms. Pickens, blessed with excellent health, lives life with gratitude each day. She also lives life with great humility. Ms. Pickens shares her philosophy with all of us, “Try to live a decent life. Love God. Live life fully.” She states, “Be kind to one another. Treat everyone with kindness and respect. Live simply. Be grateful each and every day. Work hard. Education is important. Learn new things each day. Respect nature. Eat the right foods, including vegetables and fruits. Get your exercise, and get lots of fresh air. Keep active. Be engaged with others and your community. Take good care of your children and your family. Take good care of yourself and your health. Thank God for giving you each new beautiful day.” Happy Birthday, Ms. Verlie Mae Pickens! ©Anh Le has worked with the African American community, the Vietnamese American community and other communities in San Francisco and the Bay Area for many years as a community organizer and educator. He served as the director of Senior University classes at Senior Action Network, where Ms. Verlie Mae Pickens worked as a volunteer. He also worked at the Network for Elders in Bayview Hunters Point. 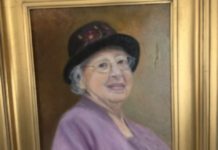