Menhuam Ayele is a city planner, author, gardener, father, philosopher and many other things in the city that he hails from, Oakland, California. One of the most important and interesting ideas that he is working on is the concept of Africa Towns, similar to Chinatown in any urban area, but centered around the needs of the Black community.

He also hosts Black Family Day in the Garden in West Oakland, where he encourages Black families to come together to plant and harvest food. This is a dynamic Brotha in the community with a lot of cutting edge creative ways that can potentially solve some of our economic and health problems. Check out Menhuam in his own words…

M.O.I. JR: What is Ujamaa Village? How did you come up with the concept?

Menhuam: Ujamaa Village is a cultural restoration project I am currently working on with others. It is also based on two books I have written for my master’s degree thesis project. These books are about developing and building modern day “green” Africa Towns that contribute to the sustainability of our community with a culturally relevant emphasis.

I concluded from decades of personal and eventually academic research that the solution to the horrific statistics that haunt the Black Community (see “The State of Black America” and “The Buying Power of Black America”) can be solved by redesigning how our community is put together physically and mentally in the built environment we live in.

The idea of “village,” African communalism and green, sustainable design, is what Ujamaa Village represents for the restoration of the Black community. Subsequently this name “Ujamaa Village” comes specifically from Tanzania, Africa, introduced by Julius Nyrere under the Arusha Declarations.

M.O.I. JR: What does the word Ujamaa mean? In what language?

Menhuam: Ujamaa is from the Swahili language for “family” or cooperative economics. Swahili is a Bantu language spoken in Eastern Africa in several countries.

It is a language that became popular in the 1960s and ‘70s during the Civil rights and Black Power movements. Ujamaa is also one of seven principles of Kwanzaa, an African American holiday that many celebrate. I choose this name because it is culturally appropriate.

The idea of “village,” African communalism and green, sustainable design, is what Ujamaa Village represents for the restoration of the Black community.

M.O.I. JR: Why is it important to relate to Africa?

Menhuam: Africans in America who are descendants from the continent of Africa through the slave trade centuries (1500 -1860s) have a genetic and spiritual connection to the land mass of the African continent. It’s where a majority of us can trace of ancestry. Our genetics have cellular memory and “spiritual” (my belief) memory or passed down traditions, as modern science has discovered.

My premise then is that Africans brought here to America have much in common with Africans on the continent of Africa. Five hundred years of being away is not a very long time period of being away from our homeland to sever those ties, although the crucible of slavery attempted to do that. Having been robbed, tortured, terrorized and dehumanized out of our 1) gods, 2) names, 3) folkways, 4) mores, 5) languages, 6) traditional norms, we must “go back and fetch” (Sankofa) those things to remember those cultural practices that gave us the knowledge, wisdom and understanding of how to live cooperatively and sustainably on the planet Earth, devoid of any “system.” 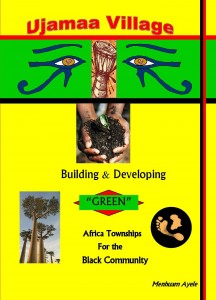 I’m speaking about indigenous wisdom we passed on for millenniums of generations about living close to the natural world. Our unique ways of expression and communing with the earth and cosmos was our “humanity,” which we lost due to the slave experience. Reconnecting with our ancestral cultural wisdom will assist Black people here in America in repairing our communities from the trauma we are still dealing with which affects our community’s ability to create sustainable and functional environments

M.O.I. JR: Can you tell us a little bit about the history of your garden? When is Black Family Day in the Garden?

Menhuam: In March of 2013 I approached Dr. Wade Nobles at The Institute for the Advanced Study of Black Family Life and Culture about starting a meditation and healing garden for the Black families he and his staff were working with in West Oakland. Being that he already wrote the introduction to the Ujamaa Village book, I saw it as a way to demonstrate more of the concepts put forth in the book.

Gardening is a fundamental approach in developing any village, city or civilization and creating the road to sustainable living. From creating the meditation and healing garden for the IASBFLC, I began to invite more Black families to come and learn about gardening, which turned into “Black Family Days in the Garden” every first and third Saturday of every month. We have been doing it for over a year now, going into our second year. It’s a success.

M.O.I. JR: What is important about growing your own food?

Menhuam: The act of growing your own food has a history that goes back as far as when humans developed agriculture. The process from planting a seed and watching it germinate into a tree, a flower, an herb, spice or bush is a magical education about the process of how life happens.

From a more civilizational point of consideration, agriculture as an organized field of growing food is a key element in the foundation of “civilizing” humans in order to build human settlements. No food equals no “civilization.”

For Black people in America and Western societies, we have forgotten that we were the laborers who grew the food for white society to rule and dominate over us and eventually other people of color. Having been “freed,” Black people mistakenly left the fields of agriculture to move to the urbanized cities of America in search of “a better quality of life.”

In just two generations (1940s-1980s), we stopped being farmers. Again in terms of building a village, nation or civilization, the farmer is a key profession and trade. In order to truly empower the Black community, we need to control our food source, which is currently not in our hands but in the ones that control and oppress our people.

Gardening is a fundamental approach in developing any village, city or civilization and creating the road to sustainable living. From creating the meditation and healing garden for the IASBFLC, I began to invite more Black families to come and learn about gardening, which turned into “Black Family Days in the Garden” every first and third Saturday of every month.

They literally have us by our stomachs. That is why it is absolutely most important that we grow our own food.

M.O.I. JR: Can you tell us a little bit about the book you published a few years back?

Menhuam: This book that I published was a culmination of my research into African and African American history, ecology, design and architecture. Looking into all these fields revealed to me greater possibilities for solutions to the dilemmas and problems that overshadow the Black community.

Ujamaa Village is a prescriptive antidote for us to seriously utilize in implementing practical solutions into the fabric of Black life and most importantly our families. Bringing back and reviving the idea of Black Towns or Little Africas is an economic, social, cultural and spiritual imperative for our community to be empowered as a people.

It is the “logos” of our redevelopment from the horrible experience of the Black Holocaust (1555-present). It covers several key areas of Black life and offers “green, sustainable and ecological” solutions for our people to heal, restore and regenerate our communities.

For the state of Black America, the issue is jobs