On Aug. 9, police in Ferguson, St. Louis County, Missouri, murdered Michael Brown, 18, as he put his hands in the air to let his friend escape. Then the police aimed their full U.S. military-strength force at all the youth of Ferguson who dared to demand justice.

With the world watching and their hands in the air, identifying the police as the source of the violence, night after night, young people waded INTO the tear gas and stood unflinching with guns in their faces. Oscar Grant’s Uncle Bobby, Cephus Johnson, calls them the most fearless youth of our generation. And they vow not to stop until killer cop Darren Wilson is brought to justice.

In Ferguson, the poverty rate doubled in three years and the unemployment rate rocketed from less than 5 percent to over 13 percent in two years. With gentrification at a fever pitch, Black communities across the country, in the inner cities and the suburbs, are fighting for survival. Everyone’s asking, what next? 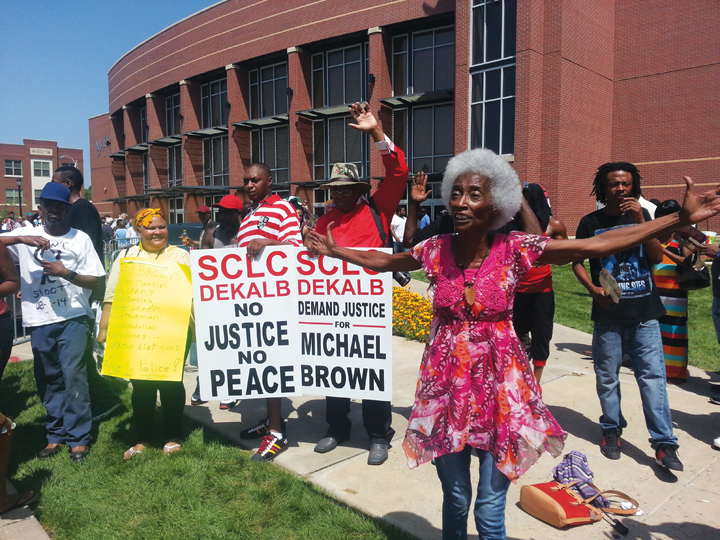 I say we use our power – with the fierce determination of the youth of Ferguson – pool our resources and put our people to work, proudly providing for their families, building and developing their own, our own, community. That’s why I founded Rising Sun Developers and Rising Sun Investments. Right now, steady, expert hands are laying the groundwork. We’ll have more to report soon.

In Ferguson, the community has fused together across age, class and even race and street tribe differences. In these photos, the Bloods and Crips make peace, and an elderly woman outside the church, packed with 4,500 mourners at Michael Brown’s funeral, leads the hundreds left outside in protest chants to support the youth.

In the words of Marcus Garvey, whose UNIA, the largest mass movement in Black history, just celebrated its 100th anniversary, “Up, you mighty race; accomplish what you will.”

Contact Bay View publisher Dr. Willie Ratcliff at publisher@sfbayview.com or (415) 671-0789. And help us honor some of your favorite media-makers at Black Media Appreciation Night 2014 on Saturday, Sept. 13, 7 p.m., at the African American Art and Culture Complex, 762 Fulton, San Francisco. Seating is limited. Buy your tickets now at Eventbrite: Look for Black Media Appreciation Night. See you there!