“Motown the Musical” is a wonderful story of a man’s ability to take a dream and, with the support of first his family and secondly his community – in this case, artists in Detroit, Michigan – see the vision through to its fruition. Berry Gordy Jr. wanted to be Sugar Ray Robinson, the Brown Bomber, when he listened to the fight on the radio with family – the fight in the ring, the unofficial end of white supremacy.

His father told him to be the best Berry he could be and so he kept that advice close to heart as he tried his hand at boxing, where he earned a Golden Glove. However, his fame lay in another direction, music, and when one of his songs and then another became hits, yet he wasn’t earning hit song money, he decided to open his own music company, Motown, a company that put Black music on the map and provided the bridge between mainstream white America and the parallel nation Black people occupied, but not for long.

The Hon. Marcus Garvey speaks to the mythology of race, a myth that carries with it tangible consequences for Gordy as he tries to get his songs played on the air to white audiences. Good music is good music, and with the many imitators who steal style and content from Black artists, the idea that white Americans would or could not appreciate Black music was an exercise in denial especially when they kept the content, just switched out the container – homogenized was the name of that brand.

When Gordy quits his job to follow his heart, he takes his proposal to his family and they loan him the money. From the very beginning, Gordy asks advice from his older sister whom I think he stays with. This sister ends up being an integral part of the management team, eventually becoming senior vice president.

“Motown the Musical” is a wonderful story of a man’s ability to take a dream and, with the support of first his family and secondly his community – in this case, artists in Detroit, Michigan – see the vision through to its fruition.

The stage production, based on Gordy’s book, “To Be Loved: The Music, The Magic, The Memories of Motown,” shows weekly meetings where the artists and managers talk about the ratings, new songs, the direction of the company and Gordy seems to listen to his family of artists and weigh their suggestions and requests. He even admits when he is wrong.

I don’t know how I missed it, but I am surprised when Gordy falls in love with Diana Ross – it’s gradual, as when he first meets her, she is in high school and he tells her and her friends to graduate and then come see him. One day, though, the girl grows up and she and he fall in love, and over time he devotes his life to making her a superstar. This includes moving his company to Los Angeles, so she can break into film.

The story of Motown, directed by Charles Randolph-Wright, is Black love at its most positive. No one is killed, everyone gets paid and Black people remain friends once the gig is up and they move on. Motown is also the story of friendship – Smokey Robinson (Nicholas Christopher) for Berry Gordy and his belief in Gordy’s dream.

The two stars, Clifton Oliver (Berry Gordy) and Allison Semmes (Diana Ross), have a rapport and cadence one can hear and feel as Semmes’s Ross grows into her artistry and womanhood. In Semmes’s skilled hands, Ross’s maturation is palatable and genuine. It is so fun to watch her, as you pinch yourself because you know: It’s not Ross, right? There is audience participation and the stars leave the stage during the performance (smile).

It is really a rare evening in the theatre that should not be missed.

The story of Motown, directed by Charles Randolph-Wright, is Black love at its most positive. No one is killed, everyone gets paid and Black people remain friends once the gig is up and they move on.

The dancing is outstanding and, well, the music … it is the soundtrack of America, because at some point, the stories are not just our stories, they are OUR stories. This is why audiences sing along, clap and want to get up and dance – but they don’t (smile).

The Motown sound is unique and inimitable; there is nothing like it anywhere. The cast is phenomenal – those already mentioned and others such as Marvin Gaye (Jarran Muse), Gordy as a child and an adult (Reed L. Shannon (the night I attended)), Stevie Wonder and, of course, Michael Jackson (Reed L. Shannon). Even Ed Sullivan (Doug Storm) brings back fond memories of watching TV on Sunday night with my parents and waiting for the bubbles to signal the end of the show.

The white studio executives and agents who resist until it is not economically feasible are present, yet these artists see themselves as Freedom Riders. Their music takes the edge off the bitter pill America forces Black people to swallow daily. The excellent staging shows how these segregated venues are dangerous for Black audiences and for Black entertainers.

The juxtaposition of footage from the vitriolic and volatile American South and elsewhere shows the rage that feeds the policies of a separate, unequal America. The danger gives an edge to the performances on stages where armed police stand to ensure the musicians and the audiences stay racially segregated.

The Motown sound is unique and inimitable; there is nothing like it anywhere. The cast is phenomenal. The show, which is a family friendly performance, is up at the Orpheum Theatre in San Francisco until Sept. 28.

This Motown is a reminder of the breadth of the Civil Rights Movement. Like the later Anti-Apartheid Movement, it too covered a lot of territory – artists an integral part of the movement’s success.

From the costumes to the set, lighting and choreography, not to mention the songs, the live orchestra and the compelling story, Motown is a Black success story. Motown was an economic success inasmuch as it created an artistic legacy few if any have been able to match or sustain.

What was Gordy’s secret? How did he make this happen? Was all the talent located in this region exclusively? No, of course not, there were unique sounds coming from multiple regions of the country, but none had the Motown machine to polish, package then mass market them.

When Marvin Gaye composes “What’s Going On,” Gordy isn’t happy with the tune. It is a bit heavy for his palate – Motown is known for its love songs – but Gaye has his way and the song is a hit. The staging is a military exercise with scenes from the war projected in the background.

Visual imagery suggests immediacy, a strategy used often as political periods mark the landscape and presidents and civil rights leaders are killed. It is never business as usual for the Gordy camp; each day is a new challenge to overcome and opportunity to seize, and they do with tremendous effort. Success means work – work on one’s diction, grace, wardrobe and fortitude to hang in there as white America comes to realize, Black people are here to stay.

The show, which is a family friendly performance, is up at the Orpheum Theatre in San Francisco until Sept. 28. For 20 percent discount on select seats on Tuesday, Wednesday, Thursday and Sunday evenings, use the code ALBUM when making a purchase. Call 888-746-1799 or visit motownthemusical.com. 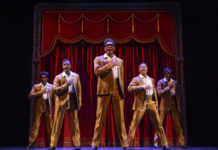