After Belgian scholar Filip Reyntjens read what had been said about him at Rwanda’s Commission of Inquiry into “genocide denial” by the BBC, he offered to speak to them himself, but they refused to hear him, despite their own accusations that the BBC was biased and willing to listen to only one side.

KPFA Weekend News Anchor Sharon Sobotta: The government of Rwanda, a longstanding U.S. ally and military partner in Africa, has established a Commission of Inquiry to indict the British Broadcasting Corporation, or BBC, for the crime of genocide denial in its recently aired documentary, “Rwanda’s Untold Story.” The government and its supporters have accused the BBC of bias and speaking only to one side. 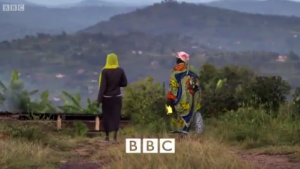 This week, however, when Belgian scholar Filip Reyntjens offered to speak to the commission in response to those attacking him for what he told the BBC, they refused to speak with him. KPFA’s Ann Garrison spoke to Filip Reyntjens.

KPFA/Ann Garrison: Filip Reyntjens, aren’t these Rwandan government attacks on you and the BBC typical of totalitarian expression, in that they presume that there is only one truth, that that truth is sacred, and everyone knows what it is, so anyone who even questions it is either evil or perverse or, in this case, a genocide denier?

Filip Reyntjens: Yes, that is correct, and every Rwandan, from President Kagame down to a peasant on a hill somewhere, they all know what that truth is. I mean it’s very consistent. They know what to say. Many people of course think otherwise, but they’re not allowed to express it openly.

And then there’s a hidden transcript of the oppressed, and one should realize that the oppressed in Rwanda are not just the Hutu. There are many Tutsi who feel oppressed as well. We should, I think, abandon this dichotomist or Manichean view of Hutu vs. Tutsi. Many Tutsi suffer from this dictatorship as much as Hutu do.

KPFA: Wasn’t one of the most widely held beliefs that you helped to upend in the BBC documentary the belief that Gen. Paul Kagame and his RPF army stopped a genocide?

Filip Reyntjens: Well, what we can see is – and I mentioned this in a piece I published in African Arguments website – that the main concern of Paul Kagame and the RPF was not to stop the genocide. It was to win the war. And I quote extensively from General Dallaire’s memoirs. Dallaire was the commander of the UN Peacekeeping operation there. And Dallaire, on several occasions, went to see Kagame and said, “Listen. These people, these Tutsi there, your troops are about 20 kilometres from where those Tutsi are assembled and they will be killed, so please intervene and rescue these people.”

And Kagame would routinely answer, “I’m sorry. I can’t do that because I’ve got a war to win.” And he even uses the expression “sacrifice.” I mean he says, “Well, there are sacrifices in every war and I imagine these are the sacrifices of this war.” So he accepted massive slaughter of Tutsi, of his own kinsmen, on the altar, so to speak, of military victory.

The main concern of Paul Kagame and the RPF was not to stop the genocide. It was to win the war.

KPFA: Kagame himself has been hugely empowered by the genocide or, rather, the dominant narrative about the genocide, hasn’t he?

Filip Reyntjens: That is part of the RPF narrative, of course. That the RPF put an end to genocide, according to their narrative, has been a major asset, a trump card in Kagame’s hands. No doubt about that. And this is coupled with the idea that the international community did not do anything.

Now those two things are what I call the “genocide credit.” The genocide, for Kagame, has been and to some extent still is today an element that he constantly uses to, for instance, deflect attention from his own human rights abuse.

KPFA: A number of writers have said that Kagame deliberately sacrificed the Tutsi to create the moral justification for his minority dictatorship, because he knew that he couldn’t win the democratic, multi-party election scheduled in the Arusha Peace Accords. There’s even a book titled, “How Paul Kagame Deliberately Sacrificed the Tutsis.”

Filip Reyntjens: I don’t think Kagame had a real interest in having so many Tutsi killed, but I think his interest was to have Hutu extremists conducting a genocide live on television, and we’ve all seen those images on television, of a genocide conducted almost live. This of course gave him the moral upper hand, so to speak.

And this very much reinforced the good-guys-bad-guys story. I mean the bad guys were there. You could see them on television. So the other guys had to be the good guys. I’ve been saying almost from Day One, that this was not the story of good guys and bad guys. It was a story of bad guys. Period.

KPFA: Here in the West, we can talk about how brutally the Rwandan police state punishes anyone who contradicts its false heroic narrative about stopping genocide, but, until the BBC broadcast “Rwanda’s Untold Story,” that false narrative, the same false narrative, was the one reprinted or retold by every major corporate or public broadcasting outlet in the West for the past 20 years.

Filip Reyntjens: Yes, that is correct. The BBC has done something here that was taboo. The title of the documentary is “[Rwanda’s] Untold Story.” Actually, it’s not an untold story. The story has been told on several occasions, but it’s not the dominant narrative.

KPFA: And that was Filip Reyntjens, Belgian scholar and professor at the University of Antwerp. Reyntjens also said that Rwanda is very dependent on foreign aid, and the loss of foreign aid is the greatest danger it faces from criticism in the West.

Oakland writer Ann Garrison writes for the San Francisco Bay View, Black Agenda Report, Black Star News, Counterpunch, Colored Opinions and her own website, Ann Garrison, and produces for AfrobeatRadio on WBAI-NYC, KPFA Evening News, KPFA Flashpoints and for her own YouTube Channel, AnnieGetYourGang. She can be reached at ann@afrobeatradio.com. In March 2014 she was awarded the Victoire Ingabire Umuhoza Democracy and Peace Prize for promoting peace in the Great Lakes Region of Africa through her reporting.