“My father is still considered to be a dangerous individual,” said Mumia Abu-Jamal’s daughter Goldii, one of his strongest and most astute supporters, in a 2011 interview. “His mind is what they fear. There is overwhelming evidence that would exonerate him of his conviction. He is an innocent man and the Commonwealth (of Pennsylvania) has always known this, but being too Black, too smart and too strong … The government will silence anyone who possesses the power to open the minds of the people.”

The Free Mumia Abu-Jamal Coalition announced her passing on the afternoon of Dec. 17: “It is with deep sadness that we share the news about the transition of Goldii. We extend our condolences and love to her mother, Wadiya, her father, Mumia, her two young daughters, her sisters and everyone else who was close to her and loved her.

“Goldii showed tremendous creativity as an artist, seriousness as a student of psychology, and tenacity and courage in the face of her tragic illness. Even when quite ill, she stood up to offer solidarity to her father and to call for a better world. We will miss you, Goldii, but you have left your mark and we will remember you.”

“The inhumanity of being separated from your family weighs heavily on every prisoner,” wrote Prison Radio the following day. “For Mumia, held in solitary, with non-contact visits for 30 years, it was and is heart wrenching.

“We are saddened to share the news that Samiya ‘Goldii’ Davis Abdullah, daughter of Wadiya Jamal and Mumia Abu-Jamal, passed away earlier yesterday after a long fight with breast cancer. Born in 1978, she was just 36 years old.

“She had just finished a master’s degree in social work at the University of Pennsylvania and is survived by two young daughters. In one of the most moving and personal pieces that he has written, Mumia describes her visit to him when he was in solitary confinement on death row at SCI Greene. ‘The Visit’ is in his first book, ‘Live From Death Row’ (Harper Perennial) and was recreated in the movie, ‘Mumia: Long Distance Revolutionary.’

“Known as Goldii, her stage name, Samiya was a rapper of lyrical grace and sharp, pointed consciousness, one who used her spoken word skills to highlight issues of racial inequality, criminal (in)justice, and always to promote Black liberation.

“From a daughter’s perspective, she was a dynamic spokesperson, speaking stirringly of the impact incarceration has on children and families. She was also a staunch advocate on behalf of her father’s innocence.

At “All Out for Mumia,” an event held on the 30th anniversary of her father’s incarceration at the Constitution Center in Philadelphia Dec. 9, 2011, Goldii recites “Trap Doors,” a rhyme that eloquently explains how her father was shot and subsequently framed for murder. She and Frances Goldin read “Rosa our Rosa,” written by Mumia.

Here is “The Visit,” a chapter from Mumia’s first book, “Live from Death Row”:

“In the midst of darkness, this little one was a light ray. Tiny, with a Minnie Mouse voice, this daughter of my spirit had finally made the long trek westward, into the bowels of this manmade hell, situated in the south-central Pennsylvania boondocks. She, like my other children, was just a baby when I was cast into hell, and because of her youth and sensitivity, she hadn’t been brought along on family visits until now.

“She burst into the tiny visiting room, her brown eyes aglitter with happiness; stopped, stunned, staring at the glassy barrier between us; and burst into tears at this arrogant attempt at state separation. In milliseconds, sadness and shock shifted into fury as her petite fingers curled into tight fists, which banged and pummeled the Plexiglas barrier, which shuddered and shimmied but didn’t break.

“’Break it! Break it!’ she screamed. Her mother, recovering from her shock, bundled up Hamida in her arms, as sobs rocked them both. My eyes filled to the brim. My throat clogged.

“I put on a silly face, turned back, called her to me, and talked silly to her. ‘Girl, how can you breathe with all them boogies in your nose?’ Amid the rolling trail of tears, a twinkle started like dawn, and before long the shy beginnings of a smile meandered across her face as we talked silly talk.

“I reminded her of how she used to hug our cat until she almost strangled the poor animal, and Hamida’s denials were developing into laughter. The three of us talked silly talk, liberally mixed with serious talk, and before long our visit came to an end. Her smile restored, she uttered a parting poem that we used to say over the phone: ‘I love you, I miss you, when I see you, I’m gonna kiss you!’ The three of us laughed and they left.

“Over five years have passed since that visit, but I remember it like it was an hour ago; the slams of her tiny fists against the ugly barrier; her instinctual rage against it – the state made blockade raised under the rubric of security, her hot tears.

“They haunt me. From death row, this is Mumia Abu-Jamal.”

The Campaign to Bring Mumia Home wrote: “Samiya was an accomplished artist who expressed the injustice of her father’s case through her music. A voracious reader, she read her father’s books and discussed them with him.

“As a child she visited him on death row. In his radio essay ‘Goldii’s Visit,’ Mumia recounts her distress at the partition separating her from her father; she pounded her fist on the plexiglass and called to her mother to “break it.” It was with this fighting spirit that she lived her life.

#Goldii, Mumia’s Daughter: All Out For #Mumia #D911 from adele pham on Vimeo. 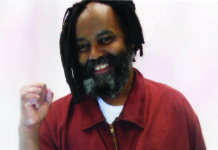 The impact of Mumia on me: Reflections on Mumia Abu-Jamal 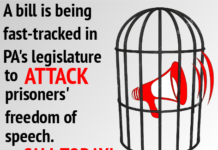 Oct. 14 take action to stop Pennsylvania’s ‘Gag Mumia and All Other Prisoners’ bill

Last minute appeal from death row: Vote No on 34 to protect our due process rights