“The family’s homelessness has nothing to do with the Housing Authority. We couldn’t help what the landlord did.” I listened as the supervisor at the Housing Authority of Monterey County rattled off a long list of reasons that they thought released their agency from any responsibility for the crisis of Bessie Taylor and her disabled son Devonte, who are now living houselessly in Salinas, California, because the Housing Authority took too long to move on the family’s reasonable accommodation claim, and they subsequently lost their home of 22 years.

“The California Fair Employment and Housing Act protects you from illegal discrimination and harassment in housing based on a mental or physical disability. Discrimination includes, but is not limited to, the following actions: failure to provide reasonable accommodation in rules, policies, practices or procedures when necessary to afford a person with a disability equal opportunity to use and enjoy a dwelling.” That explanation of the law was read at the press conference by Krip Hop Nation founder and POOR Magazine reporter Leroy Moore.

After being contacted by the Taylor family and their revolutionary advocate, Pamela Weston, POOR Magazine youth and adult poverty skolaz held an emergency Black History Month press conference and rally for the Taylor family and all Black and Brown families with disabled children struggling in Monterey County with endless poverty “industry” pimping, racism, classism and ableism.

“There are so many homeless people in Monterey County,” said Jamillah, Bessie’s beautiful, strong hearted adult daughter. She explained to me as we walked through the brush-stroked painting that is downtown Salinas, “It’s really cause the rent is so high here and there is no rent control,” she concluded.

No rent control, old-school scarcity model poverty pimps, racist klan agri-business-run city hall, anti-poor people laws that criminalize, harass and arrest poor people and ableist laws that don’t protect disabled people at all. This is Salinas. This is Monterey County. This is most of what I affectionately call Amerikkklan. And more and more poor, Black, Brown, disabled families and elders across this stolen indigenous land are in a serious crisis.

After being contacted by the Taylor family and their revolutionary advocate, Pamela Weston, POOR Magazine youth and adult poverty skolaz held an emergency Black History Month press conference and rally for the Taylor family and all Black and Brown families with disabled children struggling in Monterey County.

“This city does not treat poor families, people of color right; it never has,” conscious servant of the people and City Councilmember Jose Castaneda said, narrating our six-minute journey from the oddly clean, boutique downtown of Salinas into a tiny area known since the Steinbeck days as Chinatown.

Tents, lean-tos, cardboard boxes and abandoned couches butted up against sleeping bags, plastic bags, suitcases, shopping carts and the scattered belongings of people who once had a home. And then I saw it, the part that always pierces my already broken heart: baby strollers, coloring books and half-broken toddler toys, remnants of houseless children, a silent statistic lost in the vortex of greed, profit and earnings off of the fake notion of “owning” land.

I was houseless with my mama for most of my childhood across this state. Ended up sleeping in our car when we had one and on the street when there was no room in shelters or money to rent a motel. This trauma haunts me to this day and often renders me speechless when I witness children and families living like me and my mama did for so long.

We were houseless ‘cause my mama was disabled and as an orphan, an unwanted child of color in Amerikkklan, severely abused and tortured as a child in racist foster homes and orphanages. So much of what she went through had everything to do with U.S. scarcity models, white-supremacy and the criminalization of poor mothers.

I eventually did “time” for the poverty crime of houselessness. These are the roots and the real of everything we work on at POOR Magazine as fellow poor, disabled, indigenous peoples of color in resistance.

After the rally and press conference, our crew of conscious youth from Deecolonize Academy, the school we landless people at POOR Magazine started in conjunction with Homefulness, a poor people-led solution to houselessness, and reporters Queenandi, Leroy Moore, who’s also with Krip Hop Nation and POOR, and migrant poverty skola Muteado Silencio and myself accompanied the family to Assemblyman Alejo’s office to try to get some justice for the family.

After the original meeting, our youth skolaz and I went to Dorothy’s Kitchen, a free lunch in the middle of Chinatown, which is where we witnessed the violence of poverty this town wages against its poor.

“Several times a year the city does sweeps of this area, arresting people, throwing away belongings and tents and completely dismantling this community,” conscious City Councilmember Jose Castaneda explained, pointing toward the several lines of tents and people crammed into a five block long area with an odd prison-like boundary. This is the same exact scene I have witnessed, lived in and fought against in Sacramento, San Francisco, Los Angeles, New York, Oakland and Phoenix, Arizona, the latter being a scandal perpetrated and set-up by none other than migrant hater Sheriff Joe Arpaio.

After we are displaced and gentrified

Generations of exploitation and colonization, beginning with the original displacement and genocide by colonizers and missionaries of First Nations peoples, there followed generations of ablism, shame, classism, false borders and white-supreamcist kkkourts, leading to shanty town after shanty town from Sacramento to San Francisco. After we are evicted and displaced, we are hiding under bus shelters, doorways and in cars, arrested for sleeping, standing, being alive while poor, disabled, Black and Brown.

While I was writing this article, I received four calls from families and elders facing unlawful, gentrification-fueled evictions in San Francisco and Oakland. In every case, people cried, “Where will we go?”

After Jose and I drove around the corner, leaving the tragedy of “Chinatown,” we had the surreal experience of going to the John Steinbeck museum, only to learn how Steinbeck chronicled the ways in which poor white people who were refugess from the Dust Bowl and the Depression-era banksters had been violated and abused by the rich white landowners of the Salinas Valley. Ironically, the same rich white landowners seem to run the town now.

The “Monster,” as the companies were called by Tom Joad from “Grapes of Wrath,” who exploited poor people then are acting the same now – except now the monster has expanded to include housing developers and slumlords who charge exorbitant rent from the poor, migrant and very poor people who go there to work in the fields and face abusive work conditions.

While I was writing this article, I received four calls from families and elders facing unlawful, gentrification-fueled evictions in San Francisco and Oakland. In every case, people cried, “Where will we go?”

At the same time the city and county arrests people for being homeless and criminalizes families for being poor. Except now it seems worse. Now we have gentrification and a new class of rich people who have been born and bred in killer kkkapitalism to care for no one but themselves and their own self-centered “success.” That’s coupled with the intentional leeching of the few resources, such as public housing and Section 8 programs, as we-searched by Western Regional Advocacy Program (WRAP) over the last several years.

So many settler-colonial lies, so little time

The surrealist part is the people who clearly seem to understand the indecency against the “Oakies,” described so eloquently by Steinbeck in “Grapes of Wrath,” don’t see the 21st century Oakies, don’t see them or perhaps don’t want to see them. They are right there, right under their nose, two blocks away from the John Steinbeck Museum.

This is where the settler-colonial racism comes in as well as the U.S.-style scarcity models that the welfareQUEENs project of POOR Magazine uncovered over our four years of we-search and lived investigation. Who are the deserving versus undeserving poor? Perhaps in their settler-colonial minds, the “Oakies” were the “good” poor people – white, previous homeowners, workers – and therefore somehow they were “different” poor people.

But the reality is that generations of capitalist exploitation, white-supremacist laws, budget cuts, hate and greed has rendered people sick, destroyed, isolated, abused, addicted and disabled. And then add in the extra-judicial killing of Brown men and you have the covert and overt racism of most of this territory stolen the Costonoan Ohlone, Esslen and Salinian First Nations.

POOR Magazine was first introduced to our poor brothers and sisters of Salinas when author and poet Luis J. Rodriguez, who ran for governor of California in 2014, launched the California Network of Revolutionary Change and held the first convening in Salinas, California, focused on the police killing in that town. Last year alone there were almost five police killings of brown men, fathers, sons – hard-workers killed for the sole act of being Brown in this covertly racist town that pretends to be conscious.

“We have to do for ourselves. We can’t keep relying on others to ‘fix’ our communities when they never do,” said a powerful African-American pastor, Carrie Silas, who attended the press conference summing up the revolution of self-determination that we live by at POOR Magazine. It’s why we took back stolen indigenous land in Deep East Oakland and are working to build Homefulness. It’s what we hope we can help other poor communities across Mama Earth to begin building without the lie of philanthro-pimping and government infiltration.

“My home since I was a baby is gone. Now we have nowhere to live,” Devonte said, speaking for his family and all of the Black and Brown and disabled families fighting for justice every day in Amerikkka. Now we all need to fight for Devonte and his family.

POOR has been collecting donations for the Taylor family and has managed to help them stay in a motel for over a month. If you want to donate to the GoFundMe campaign, go to http://www.gofundme.com/m6l2n0.

We are also seeking an attorney to advocate for the family against the Housing Authority and finally for a landlord willing to rent to the family; they are still on Section 8. Please contact POOR Magazine at poormag@gmail.com or call 510-435-7500. 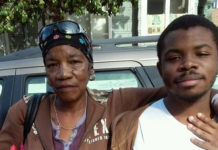 When a mother and her autistic son are evicted: The story of Bessie and Devonte Taylor