First off, thank you for being there every step of the way over all of these years. I cannot even begin to mention every place you’ve been, but I do know that behind these prison walls within a lot of these cages our love for you runs deep. I told myself long ago that I’ve got to reach at the Bay View, so here I finally am with pure love and appreciation for y’all, always.

My name is Guss Lumumba Edwards. Everyone calls me “Lumumba,” which means “gifted”. My experience is like some of your contributors. I was encaged in Pelican Bay SHU from 2005 to 2013 – my last five years in the Short Corridor, D4.

By way of the first two hunger strikes, they released me to this general population here at what they call New Folsom, aka CSP-Sacramento, and as expected even the general population “ain’t nothing nice,” which goes to say that within the near future I will submit to you a thesis on the dangers of homeboy-ism behind prison walls, how it disconnects unity, demoralizes various ideologies and keeps up a very high level of fundamental numb-skullism and prison yard drama that only allows us to be separated as a race of people – and even with the no-hostility agreement, still in play.

No, there’s no racial tension, disrespect nor no racial melees. Why? Mainly because there’s a lot of Africans and Southern Mexicans from the various SHUs who will not disrespect the no-hostility agreement. There’s a lot of us who are now seriously focused on doing our best to obtain dates from the parole boards or through the courts. The goal is liberation to our families and loved ones once again, where we are indeed badly needed.

This art is simply titled “Help Me,” being a composition. You can see everything in it is arranged in relation to each other, especially the pain we endure as people of color.

Most of us released from SHU were easily pointed out. We stick out, as they used to say, “like a sore thumb.” Those in the general population see that we SHU released convicts who have served multiple years or multiple decades locked up and locked down in a high level security unit – we walk a different way, we study and articulate case studies a whole lot, we work out a lot harder on our bodies, we have undeniable love for people of struggle, for the socially conscious people and lawyers who supported the struggle to have us all released from these lockup and down units.

We are also still trying to crack that smile that’s felt in our hearts. It’s still a little difficult, but we know it will come, most likely with our real liberation from these cages. But as of now, it really don’t matter just how we’re looked at on these general populations ‘cause we know we’re loved and respected and we have each other’s backs in this struggle behind these walls.

Most of us released from SHU were easily pointed out. We stick out, as they used to say, “like a sore thumb.”

Enclosed you should find a drawing in ink. I just completed it last night. It took almost six days utilizing at least two or three hours a day in between rounds of studies, letter writing, telephone calls to loved ones, just doing the prison thing.

Today I brought this drawing to the yard to let a few people view it and get feedback or opinions. Just about everyone who viewed it saw and understood the concept and was glad it’s depicted from an African perspective, ‘cause over the many years these types of concepts in various periodicals have been done mostly by Mexicans and Whites and of course many were pleased to hear that this one is going to the Bay View.

I really hope you like this composition. Some would call it a mural but, whatever the viewer feels it is, my goal is that whoever views this art, I want them to be enriched in some way by the experience. This art is simply titled “Help Me,” being a composition. You can see everything in it is arranged in relation to each other, especially the pain we endure as people of color.

It wasn’t in no way difficult putting it together, ‘cause living behind these walls makes such experience easy to express. I’m one who also fully understands who I am – of African American ancestry, forced historical miscarriage, a lineage of chattel slavery, now a product of prison bondage aka modern-day slavery.

With this brutal history, I’ve learned to use the term “visual language,” meaning I try my best to let my art creations speak to the people in a way they’ll feel and deeply understand intuitively just by viewing it. I’m going to continue doing my best to express cultural, political and spiritual connotation with a meaning behind it. Someone once said, “These prisons can be learning chambers. Take advantage of that.” Behind these prison units, I’ve learned to tolerate a lot of distractions. Of course I stay overwhelmed.

I’ve learned to use the term “visual language,” meaning I try my best to let my art creations speak to the people in a way they’ll feel and deeply understand intuitively just by viewing it.

Please keep in mind that these walls hold no limit to any determination to stay well-disciplined, to obtain ever more growth in this thang called art. Indeed I have a serious passion for it. 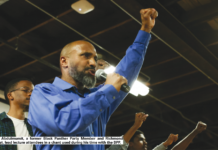