In particular, the letter pointed to “The Ebola Hot Zone,” last November’s 60 Minutes story produced in Liberia. In the story, American reporter Lara Logan watches American virologist Joseph Fair as he instructs Liberian gravediggers adjacent to an Ebola treatment unit. No African voice is heard except that of an African American doctor who speaks a few words.

KPFA/Ann Garrison: Dr. Lubega, what did you think of Howard French’s letter to 60 Minutes, the CBS news magazine, about its Eurocentric Africa coverage?

Dr. Edmund Lubega: Howard French, I think, described the situation quite well, because the American media owes their followers accurate reporting. This problem of poor reporting is not unique to the Americans. We come across it in other Western media news outlets and sometimes even in Russian media, so I think it’s something that outsiders get into.

And, on our part, we as Africans, it would be good if we could organize ourselves and try to find means by which we can share and broadcast our stories in our own way, in our own words, first of all with the rest of the continent, amongst ourselves, and then with the rest of the world at large. Complaining about Western media misrepresenting us is not going to be very useful to us.

We Africans need to take the initiative and drive the narrative instead of remaining mere spectators or bystanders in this. Like they say, if you’re waiting for permission to speak, keep quiet. We should stop waiting for outsiders to give us permission and means to talk.

KPFA: Did you see African media trying to cover the Ebola story in Sierra Leone?

Dr. Edmund Lubega: What channels did I watch in Sierra Leone? OK, mainly, we had BBC in my hotel room, occasionally CNN. Occasionally we’d watch Nigerian TV, even Kenyan TV. But there wasn’t much detail about the Ebola story. If we wanted to get information about what was going on in the Ebola epidemic, we’d go to the AU, African Union, African Union Commission website. That’s where the press releases would come out.

KPFA: And has the spread of Ebola been stopped?

Edmund Lubega: What I’ve been following is that the number of cases has drastically reduced. We’re on track so hopefully by May, Sierra Leone and Liberia could be declared Ebola free.

The number of Ebola cases has drastically reduced. We’re on track so hopefully by May, Sierra Leone and Liberia could be declared Ebola free.

Dr. Edmund Lubega: Yes. We were invited by the African Union to join the African Union Commission’s support to the Ebola outbreak in West Africa. Originally we were a team of around 30 health care professionals that included doctors, nurses and epidemiologists, IT data technicians and logisticians. And we were later joined by other teams from Nigeria, Kenya, the DRC and other countries.

Our team was deployed in the town of Makeni, in the north of Sierra Leone. The minister of health deployed us there and tasked us to work with the local health care teams, in order to raise awareness on infection prevention and control and promotion of staff safety.

Also, we were to get involved in starting the first Ebola treatment unit in the region, and we did get it started and, within about a couple of weeks or so, it was already running and we were receiving patients.

For me, I had had no experience managing Ebola patients or managing any epidemic for that matter, so it was quite a learning experience for me. But some of my colleagues had been involved in previous Ebola and Marburg, Marburg Fever, outbreaks in Uganda, and they were very helpful in orientating us.

On top of that, the Ministry of Health, together with the World Health Organization, organized induction seminars for us to give us information on how to manage Ebola patients and how to protect ourselves.

Eventually we started receiving patients, the numbers of admissions grew, and one British charity also started another Ebola treatment unit. That helped in handling the patient load in that area.

I found it very inspiring to work in a team of young and intelligent, skilled, focused, disciplined and dedicated African professionals. And I would say if they are representative of the current generation of young Africans, then our future as Africans is bright.

I found it very inspiring to work in a team of young and intelligent, skilled, focused, disciplined and dedicated African professionals. And I would say if they are representative of the current generation of young Africans, then our future as Africans is bright.

KPFA: And that was Ugandan doctor Edmund Lubega. Dr. Lubega traveled from his adopted home in Botswana to Sierra Leone to work with one of the African teams organized to stop the Ebola epidemic. 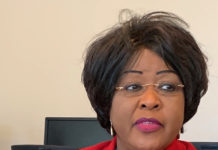