A National Day of Action has been called for Friday, April 10. The Bay Area rally is at 4 p.m. in front of the Oakland Federal Building, 1301 Clay St. The following national call lists the demands and the actions we can take now.

Stopped from carrying out the death penalty against Mumia Abu-Jamal by a worldwide movement that spanned three decades, over the past three months the Pennsylvania Department of Corrections has been attempting to execute him by medical neglect.

On March 30, Abu-Jamal was rushed, unconscious, to the Schuylkill Medical Center in Pottsville, Penn., suffering diabetic shock with a dangerously high blood sugar level of 779. After just two days in the hospital’s ICU, Abu-Jamal was returned to the prison infirmary at SCI Mahanoy in Frackville, Penn., into the hands of the same doctors whose medical neglect and mistreatment nearly killed him.

Prison officials initially denied visits by family members, supporters and Abu-Jamal’s attorneys and only backed down after receiving thousands of calls. Those able to visit Mumia on Friday, April 3, and Monday, April 6, reported he was extremely weak, had lost 50 pounds, still suffered from a skin rash and still had fluctuating blood sugar levels around 200. The prison continues to feed him meals high in carbohydrates – including cake for breakfast.

The murder of aging political prisoners by denying them adequate health care has happened before. Earlier this year MOVE 9 member Phil Africa died under suspicious circumstances at SCI Dallas. The lack of standard medical treatment impacts all prisoners, particularly those over 55.

The state of Pennsylvania must cease and desist in their attempts to murder political prisoner Mumia Abu-Jamal:

We are calling on everyone concerned to participate in the following actions:

April 6, 2015 – Mumia was very ill when we saw him last Friday, April 3. For that reason, Pam Africa insisted that we return to SCI Mahanoy today, Monday, April 6, to check on him.

His blood sugar registered in the mid-200s today and continues to fluctuate, and although Mumia is still very weak, he was better than on Friday. He told us that the doctors gave him a double shot of insulin right before he came out for the visit, likely in an effort to make him appear temporarily more energetic than he is.

This concerns us because insulin overdose is a possibility in these instances. Again Mumia has not yet been seen by a diabetes specialist, although the general practitioner told him today that perhaps he needs to see a nutritionist. This is a sign that our muckraking is working, since the news has gotten around that he was given spaghetti for lunch when his blood sugar registered at 336.

However, despite this modest progress, Mumia struggled to get out of his wheelchair so that we could take a photo of him. He remained in the wheelchair for the rest of the visit.

Mumia also told us that his mind is filled with a million things each day, but he only has the mental and physical capacity to focus on just one thought. He said that he has learned that because he has always had a strong constitution, he had failed to appreciate the centrality of life’s energy force to living. He also shared something that must have been profoundly humiliating and difficult to come to terms with.

Last Thursday, Mumia tried to go to the bathroom in the infirmary. Because he was so weak, he was not able to sustain himself on his feet. He slid down to the floor and waited there, helplessly and unable to call for assistance, for 45 minutes until he was found by a doctor and another prisoner.

We shared a touching moment with Mumia in an effort to raise his spirits. Two teachers delivered letters to us that their students had written to Mumia. One batch came from a third grade class taught by Ms. Marylin Zuniga in Orange, New Jersey. The other batch was from a group of high school students in the Philadelphia Student Union, which fights for school reform and is led by Mr. Hiram Rivera.

It had been a long time since we had seen Mumia smile. He chuckled as he read excerpts from these touching letters.

We share these photos to give you a sense of the gravity of Mumia’s condition. He has lost over 50 pounds, and his entire body is covered with a hard, leathery layer of jet-black skin, that is bloody, painful and itchy.

We continue to demand that he be allowed to see an independent team of specialists chosen by his family and supporters.

We continue to demand that he be allowed to see an independent team of specialists chosen by his family and supporters.

Our help is urgently needed now

Call to demand that outside doctors of Mumia’s choosing be allowed to evaluate and treat him and that Mumia be given a healthy diet suitable for someone with diabetes. Call:

Contribute to Mumia’s Emergency Medical Fund on Indiegogo at https://www.indiegogo.com/projects/mumia-abu-jamal-needs-medical-care-now/x/2761805.

Readers can learn more from the stories posted on sfbayview.com since this crisis arose: “Mumia Abu-Jamal hospitalized in diabetic shock, guarded, family and friends denied access” and “Mumia’s son says, ‘My father is in pain,’ as Mumia is sent back to prison,” where Block Report interviews with Johanna Fernandez and Keith Cook can be heard, “Mumia’s life is in danger; only the people can save him – keep calling!” 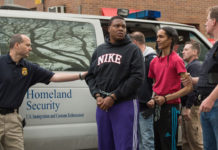 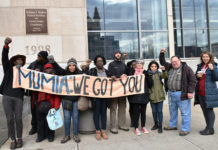 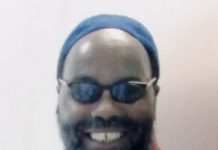