Oakland – The Lower Bottom Playaz, Oakland’s premiere North American African theater company, under the direction of Ayodele Nzinga, in collaboration with OYNX, will present staged readings of “Zara’s Faith,” a play by physician-activist Marc Sapir, on June 6 and 7. 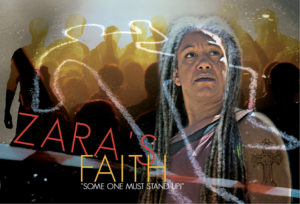 “Zara’s Faith,” set in a city that could be Oakland or any inner city in America, unfolds around the police shooting of two unarmed brothers on their way to meet friends.  Zara, their grandmother, learns about the incident in an unexpected way.

Armed with faith in her grandsons and a desire for justice, Zara summons the courage to rally her community into standing up and fighting back. The play is informed by historical events and engages some religious and ideological contrasts reflected in our communities. It is daring, timely and bold theater that promises to leave audiences talking.

The Lower Bottom Playaz strive to be more than entertainment. They are fully committed to reflecting community concerns on stage and giving space and illumination to invisible narratives, difficult conversations and issues of great concern to marginalized communities. 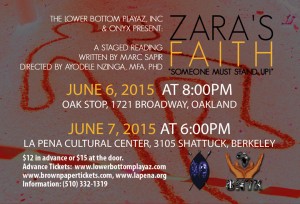 Currently The Lower Bottom Playaz are performing the American Century Cycle by August Wilson. They have produced eight of the 10 plays in Oakland and will complete the cycle this year in their 16th season of theater in Oakland. “Zara’s Faith” is in development for their main stage in 2016.

ONYX Organizing Committee was born out of the community demand for justice after the murder of Oscar Grant.  Since that time, they have been on the front lines of the movement for justice and recently convened the Anti-Police-Terror Project (APTP) that is building a replicable, sustainable model for eradicating police terror in communities of color.

Readings of “Zara’s Faith” will take place at the Oak Stop at 1721 Broadway, Oakland, at 8 p.m. on Saturday evening, June 6, and at La Peña Cultural Center at 3105 Shattuck Ave. in Berkeley at 6 p.m. June 7, as part of La Peña’s 40th anniversary weekend celebrations. There will be food for sale at Oak Stop and at The Los Cilantros Café at La Peña.

Both readings will be followed by a comment and discussion period with the audience, director, playwright, invited guests and cast members.

Tickets are $12 in advance or $15 at the door.  For further information and advance tickets, visit http://www.lowerbottomplayaz.com, http://brownpapertickets.com and www.lapena.org.

Ayodele Nzinga is founder and director of The Lower Bottom Playaz, who use performance as a way of increasing social awareness and employ artists to perform, create and present work and train youth in theater arts. Contact her at wordslanger@gmail.com. 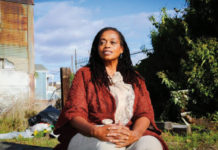 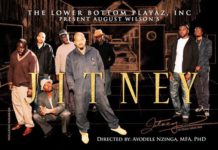