Washington, D.C. – More than 70 members of the U.S. House of Representatives, led by Congresswoman Barbara Lee, sent a letter to President Obama on May 21 to adopt a federal fair chance hiring policy. This effort was co-led by Congressmen Conyers, Scott and Davis and Congresswoman Jackson Lee. 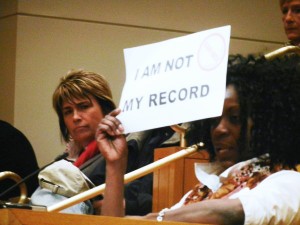 “The federal government should not be in the business of erecting barriers between those who have made a mistake and are looking for a job,” said Congresswoman Lee. “By enacting these basic ‘fair chance’ hiring reforms, the federal government will continue to lead as a model employer while working to end the cycle of mass incarceration, unemployment and recidivism.”

The effort was supported by various groups including Policy Link, the American Civil Liberties Union (ACLU), National Employment Law Project (NELP), PICO Network’s LIVE FREE Campaign, and All Of Us or None, a national organizing initiative founded by formerly-incarcerated individuals to fight against discrimination and for the human rights of prisoners.

“It’s rewarding to witness the work started in our backyard reach national levels and continue to dismantle the barriers facing formerly incarcerated communities,” said co-founding member, Dorsey Nunn, of All Of Us or None. “This effort could not have come at a better time to reflect that All Black Lives Matter, including the lives of people with arrest and conviction histories.”

“The federal government should not be in the business of erecting barriers between those who have made a mistake and are looking for a job,” said Congresswoman Lee.

The letter calls on President Obama to take executive action requiring that federal contractors and agencies refrain from inquiring about an applicant’s criminal record in the initial stage of hiring. Employers would be able to inquire about convictions and conduct background checks before making an employment decision.

The letter reads: “We urge you to build on your administration’s commitment to adopting fair chance hiring reforms by committing the federal government to do its part to eliminate unnecessary barriers to employment for people with criminal records.”

There are more than 70 million Americans with criminal records and communities of color are disproportionally affected. One in three African American men will be arrested during their lifetime.

“By enacting these basic ‘fair chance’ hiring reforms, the federal government will continue to lead as a model employer while working to end the cycle of mass incarceration, unemployment and recidivism.”

“Banning the box in federal hiring would help those who are fighting for a fair opportunity to show their qualifications for employment. This is the right thing to do for individuals seeking to provide for themselves and their families, and it is the smart thing to do for our national economy which sorely needs the talents and contributions of all of our citizens,” said Rep. John Conyers Jr. of Michigan, ranking member of the House Judiciary Committee.

“The EEOC has ruled that discrimination based on prior convictions – without an individualized assessment of the relevance to job performance – constitutes illegal employment discrimination,” said Rep. Scott of Virginia, ranking member of the Committee on Education and the Workforce. “The Fair Chance practices, also known as ‘ban the box,’ are consistent with that EEOC guidance. Studies have consistently shown that properly tailoring employment restrictions will help to increase public safety, reduce recidivism and save money.”

“The cruel, relentless logic of mass incarceration has now become apparent to all. One in four Americans has a conviction history which often excludes them from the workforce and from housing, creating new layers of crisis for our communities,” said Congressman Danny Davis of Illinois. “Ban the box is a critical step for formerly incarcerated individuals to a dignified, productive civilian life and helping families and communities become self-sustaining once again.”

The letter reads: “We urge you to build on your administration’s commitment to adopting fair chance hiring reforms by committing the federal government to do its part to eliminate unnecessary barriers to employment for people with criminal records.”

“Almost one in three adults in the United States has a criminal record that will show up on a routine criminal background check. This creates a serious barrier to employment for millions of workers, especially in communities of color hardest hit by decades of over-criminalization,” said Congresswoman Sheila Jackson Lee of Texas.

“Nationwide, 100 cities and counties have adopted what is widely known as ‘ban the box’ so that employers consider a job candidate’s qualifications first, without the stigma of a criminal record. These initiatives provide applicants a fair chance by removing the conviction history question on the job application and delaying the background check inquiry until later in the hiring. Fair chance policies benefit everyone because they are good for families and the local community.”

The letter can be found here.

Congresswoman Lee is a member of the Appropriations and Budget Committees, the Steering and Policy Committee, is a Senior Democratic Whip, former chair of the Congressional Black Caucus and co-chair of the Progressive Caucus. She serves as chair of the Whips’ Task Force on Poverty and Opportunity. Follow her on Twitter at @RepBarbaraLee and Instagram at instagram.com/repbarbaralee and like her on Facebook. James Lewis, her communications director, can be reached at James.Lewis2@mail.house.gov.