In November of 2004, an Oakland-born and Vallejo-raised Hip Hop legend was shot and killed in the streets of Kansas City. Born Andre Hicks, he is better known to the world as the Vallejo rap pioneer Mac Dre.

Many in the media wrote it off as “another Hip Hop war” reminiscent of the Tupac and Biggie murders. They were partly right. Although men of color reportedly pulled the trigger in all of these murder cases, the rabbit hole gets deeper when you study how all three of the rappers named were under FBI surveillance before they were mysteriously murdered.

“Legend of the Bay” documents the political drama that plays out in America when a young Black man is sustainably making a living, has the will and the platform to speak freely, and people listen. It also documents the life of an independent Hip Hop pioneer who was one of the main architects of putting the city of Vallejo – and most notably the neighborhood known as the Country Club Crest – on the Hip Hop map.

Mac Dre started rapping at 18. His first two hits were “Too Hard for the Radio” and “California Livin’.” In 1992, Mac Dre dropped a song on his “What’s Really Goin’ On?” album called “Punk Police,” where he talks about the constant police surveillance and harassment of him and his crew.

Relatively soon after, Mac Dre is arrested, tried and convicted for “conspiring to rob banks” with “the Romper Room gang,” reportedly because the FBI said some of the lyrics in the song pointed to Dre’s connection with bank robbers from his neighborhood.

“I’m a dope rhyme dealer, not a money stealer, was real in ‘91, but now I’m much realer,” rapped Mac Dre in the song “Punk Police.”

“They shoulda been focusing on me. But at the end of the day, like I said, he was doing his rap thang, not knowing that his affiliation with his crew could take him down,” opined J Diggs.

“Legend of the Bay” documents the political drama that plays out in America when a young Black man is sustainably making a living, has the will and the platform to speak freely, and people listen.

Reminiscent of the FBI’s Counter Intelligence Program’s surveillance and bending of the law to deal with people like Huey P. Newton, Martin Luther King Jr., Paul Robeson, Jimi Hendrix, Tupac Shakur, the Ol’ Dirty Bastard and others, Mac Dre and the Crest were in law enforcement’s rifle scope.

The FBI claimed the lyrics that he spit were connected to a number of bank robberies that some of his acquaintances were engaged in. “Legend of the Bay” features the memories, facts and opinions of Mac Dre’s mother, Wanda Salvatto, his cuddies and business partners J Diggs and Kilo Kurt, Bay Area rap legends Too Short and E40, journalist Davey D, rappers Tech N9ne, Warren G, Wiz Khalifah, Dj Quik and Mac Dre himself, just to name a few of the people filmed during this must see production.

“Now Andre was born when I was 17 (years old). So I had this baby with me. He went everywhere I went. I hung out in Berkeley a lot on Telegraph Avenue with tie-dyes, bell bottoms and afros out to here. We went to Haight Street. We were in San Francisco, and we knew people in Oakland so he got exposed to a lot,” said Wanda Salvatto, the mother of Mac Dre, in the “Legend of the Bay” documentary.

Raised in the ‘80s and ‘90s in the midst of the Reagan years, the crack era, apartheid, traditional manufacturing jobs leaving Black urban areas, the rise of punitive justice policies and mandatory minimum sentences, the “war on gangs” and the “war on drugs,” Mac Dre’s consciousness was spawned in a tumultuous political time in Black America after the Civil Rights and Black Power movements.

“There’s more mandatory minimums, more laws like ‘Three Strikes and You’re Out,’ additional policies that put more people in prison and put them into prison for longer periods of time. Now this burden was not shared by all members of society. If you look at who was in prison during this time, it was mostly young men of color from inner-city communities,” said Charis Kubrin, professor of criminology at UC Irvine.

To add to the despair, USC lecturer Chris Muniz stated in the documentary: “Oakland young males are twice as likely to go to prison than college. And the leading cause of death for youth age 15-24 is murder.”

“When lyrics are being introduced in court against defendants, it is 99 percent of the time rap lyrics. So is that to say no other musical form is violent?” asked criminologist Charis Kubrin. “What prosecutors are charging is that these lyrics reflect not art, not artistic expression, right? But that they’re literal. They reflect the motivations and confessions of rappers and the crimes that they supposedly committed. Eric and I have found that no other form of artistic expression is treated like this in the courts.”

To add to the despair, USC lecturer Chris Muniz stated in the documentary: “Oakland young males are twice as likely to go to prison than college. And the leading cause of death for youth age 15-24 is murder.”

“I think it was the police that labeled them the Romper Room Gang,” said Wanda Salvatto.

“Legend of the Bay” goes on to tell the story of how Mac Dre put his life back together from behind bars during his incarceration. His mother recalls him writing business plans and giving her advice on how to run an independent company.

At this time, he also recorded the first rap song from behind enemy lines. After coming home, Mac Dre piloted the creation of Thizz Entertainment, which turned out to be the biggest Bay Area rap label of the 2000s. A few years after Mac Dre was murdered in Kansas City, his company along with Keak Da Sneak and E40 engineered the birth of the nationally known hyphy movement.

“Legend of the Bay” goes on to tell the story of how Mac Dre put his life back together from behind bars during his incarceration.

I thought that the film was pretty good, but it lacked the essential voices of super producer Khayree, who was responsible for the production on the early Mac Dre albums, and Mac Mall, who was the third generation Mac in the Vallejo pantheon of rappers. It should have also talked about the funk that the two rappers had on record and in the streets and how they came back together to make music.

Other than missing this major part of the story, “Legend of the Bay” is a must see documentary on the life of Mac Dre and the local independent rap industry that he helped to create. If you are a Bay Area Hip Hop fan, you need to know your history about how Hip Hop grew in the Bay into what it is now. If you don’t, generations later, you will have somebody from outside our community lying to our babies about what actually happened.

“Mac Dre: Legend of the Bay” will be screened for free to close out the San Francisco Black Film Festival: Sunday, June 14, 6 p.m., at the Boom Boom Room, 1601 Fillmore St., San Francisco. 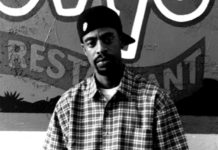