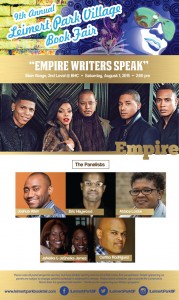 The most exciting literary event every year for Black people on the West Coast is the Leimert Park Book Fair, held this year on Saturday, Aug. 1. It brings out a lot of community members, community heroes and sheroes, as well as Hollywood celebrities to share in the festivities.

This year the Leimert Book Fair will be honoring Hip Hop photographers Ben Caldwell from Los Angeles, Ernie Paniccioli from Brooklyn, and Joe Conzo from the Bronx, alongside the Bay Area based literary giant Alice Walker, best known for her novel, “The Color Purple.”

With Black bookstores disappearing and white publishing houses being very selective of the type of authors and books that they underwrite in the Black community, this is the place where you and your children want to be to get a fresh look at what Black writers in the nation are doing. Check out the founder of the Leimert Park Book Fair and author Cynthia Exum as she tells us about this year’s Leimert Park Book Fair.

M.O.I. JR: When and where is the Leimert Park Book Fair this year?

M.O.I. JR: Who are some of the headline speakers and authors who will be featured this year?

Cynthia Exum: We really have a great lineup this year! Our theme is “The 1980s: The decade that made us.” We’re showcasing a variety of things unique to that decade – or at least things that started out in that decade – especially things associated with hip hop.

Attica Locke, writer and co-producer of the Fox TV series Empire and other writers from the show will be on a panel to discuss the groundbreaking series. The panel discussion will be moderated by author and filmmaker Tananarive Due (“My Soul to Keep,” “The Living Blood,” “Blood Colony”).

Model and actress Garcelle Beauvais (“I Am Mixed,” “I Am Awesome”), model Kathleen Bradley (“Backstage at the Price is Right: Memoirs of a Barker Beauty”), mystery writer Pamela Samuels Young (“Anybody’s Daughter,” “In Firm Pursuit,” “Murder on the Down Low”), actress Ericka Alexander and screenwriter Tony Puryear (“Concrete Park”) and celebrity chef Alice Randall (“Soul Food Love”) are just a few of the artists that will be featured at this year’s book fair.

We’re also acknowledging the 50th anniversary of the Watts Rebellion with a panel discussion. Noted community leaders, educators, elected officials and more will gather for a conversation on the impact of the 1965 Watts Rebellion.

M.O.I. JR: How did the Leimert Book Fair start? When?

Cynthia Exum: The book fair started from my desire to promote and encourage literacy, education and the love of reading in our community. None of the existing book fairs at the time focused on writers of color. I wanted to provide a showcase for local writers and bring well known writers to South Los Angeles.

We’re in our ninth year, and the book fair has grown bigger and better. We have kept our focus on providing a high quality literary cultural experience for the community. Recently, LPVBF was voted one of LA’s five best annual book festivals by The Culture Trip, an international online platform for global culture and lifestyle.

M.O.I. JR: What motivates and inspires you to head up this event every year?

Cynthia Exum: I love books and I love sharing our history. I think it’s our duty to pass on knowledge of our culture to the next generation and celebrate those that came before us. Each year at the book fair we highlight an era of our history and recognize the accomplishments of current and past generations.

At the 2015 book fair, in addition to our recognition of the 1965 Watts Rebellion, there will be a tribute to the work of Alice Walker, including a special screening of “The Color Purple.” We will also celebrate the works of three renowned photographers who captured the hip hop movement: Ben Caldwell of Los Angeles, Earnest Paniccioli of Brooklyn, N.Y., and Joe Conzo of the Bronx.

M.O.I. JR: What is the importance of celebrating literacy and literary figures in the Black community?

Cynthia Exum: Basically, it instills a sense of pride and accomplishment. Our community has a rich heritage of culture and literacy that dates back to when Blacks first arrived in America as slaves. Phyllis Wheatley, whose legacy was celebrated at the 2013 book fair, was a slave and the first published African American poet at the age of 12 in 1773.

Great poets and writers like James Baldwin, Gwendolyn Brooks, Langston Hughes along with musical genres such as jazz and hip hop – we try to acknowledge and educate people on the contribution that Blacks and other people of color have made to this country.

M.O.I. JR: What is the importance of the Leimert Park Book Fair being in the historic city of Los Angeles?

Cynthia Exum: Leimert Park is like the Harlem of the West Coast. It has a storied history. The book I co-wrote with Maty Guiza-Leimert, “Images of America LEIMERT PARK,” chronicles the history of Leimert Park and Leimert Park Village.

In the aftermath of the Watts Riots, a new sense of community, pride and empowerment paved the way for the Black Arts Movement. Artists of all races and ethnicities, musicians, poets and entertainers made Leimert Park a haven for freedom of expression.

The Brockman Gallery, The World Stage, 5th Street Dick’s, Marla’s Memory Lane – this part of Los Angeles has always been a place for art and culture. The book fair is a continuation of that tradition.

M.O.I. JR: Can you give our readers a little history on how Leimert Park became a Black district?

Cynthia Exum: Everything started to change in 1948 when the U.S. Supreme Court rendered a decision to lift restrictive covenants that kept minorities out of certain areas, including Leimert Park. Thurgood Marshall actually argued the case in front of the Supreme Court: Shelley vs. Kraemer. As Blacks and Japanese moved into Leimert Park to pursue the American Dream in the late ‘50s and early ‘60s, white residents migrated to the suburbs.

The Watts Riots in the mid-1960s was also a pivotal point in the shift of demographics in Leimert Park.

M.O.I. JR: How could people get informed about this year’s festivities?

Cynthia Exum: The best way is to visit the website: www.leimertpartbookfair.com. The latest updates can also be found on our Facebook page at Facebook.com/LeimertParkBF, Twitter @leimertParkBF and a lot of cool photos are on Instagram #LBVBF2015.