A 1968 book-length report, titled “A Study of the Manpower Implications of Small Business Financing: A Survey of 149 Minority and 202 Anglo-Owned Small Businesses in Oakland, California,” was sent to the Bay View by its author, Joseph Debro, prior to his death in November 2013, and his family has kindly permitted the Bay View to publish it. The survey it’s based on was conducted by the Oakland Small Business Development Center, which Debro headed, “in cooperation with the small businessmen of Oakland, supported in part by a grant, No. 91-05-67-29, from the U.S. Department of Labor, Manpower Administration, Office of Manpower, Policy, Evaluation and Research.” Project co-directors were Jack Brown and Joseph Debro, and survey coordinator was Agustin Jimenez. The Bay View is publishing the report as a series. A prolog appeared in the December 2013 Bay View, Part 1 in January 2014, Part 2 in February, Part 3 in April, Part 4 in May, Part 5 in June, Part 6 in August, Part 7 in October, Part 8 in November, Part 9 in January 2015, Part 10 in March, Part 11 in May and this is Part 12 of the report.

As in the ‘30s, the arbitrary policy of herding Mexicans illegally onto buses, trains and airplanes to repatriate them stirred new resentment in many Mexican Americans. Many families were disrupted. Feelings of mistrust, hostility and alienation from the prevailing Anglo society were magnified, especially since violence was not eschewed, even by elderly persons who had lived peacefully in American communities for many years.

Nonetheless, elements within the Mexican American community were opposed to the use of wetback labor because it tended to depress farm labor wages and living conditions for unorganized nationals. Hence, mixed emotions were exhibited during the wetback purge in the ‘50.

Events in the present decade bespeak a decline in the number of immigrants from Mexico, especially with the termination of the bracero program, the increased national concern with the plight of naturalized or native-born Mexican Americans and others competing with immigrant laborers, and the improving economic conditions in Mexico.

The job offer stipulation of persons seeking permanent status visas has been tightened up considerably, and quotas for this type of laborer have been linked up to constant evaluation of the local, regional and even national impact of job offers. This type of stipulation represents a radical departure from conventional criteria in determining quotas based on national origin.

The trend, then, through time, has been to view Mexican immigration as the importation or deportation of a single commodity: manual labor. There has been little concern for Mexicans as humans, as persons, but rather as dispensable power which could be beckoned or abandoned at will. This allegation is supported by an overview of the occupational distribution of Mexican immigrants compared with all immigrants for selected periods from 1910 to 1964 (Table VI). 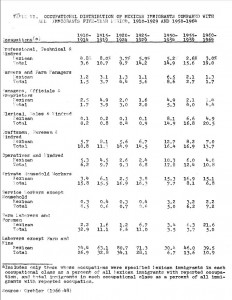 Throughout the entire span of time from the turn of the century until the present, the relative proportion of professional, technical and kindred immigrants from Mexico has been decreasing in comparison with other immigrant groups. The proportion of Mexican immigrant managers, officials and proprietors, since 1920, has consistently been lower than the proportion of all immigrants in this class.

Similar statements can be made about clerical and sales workers, craftsmen, foremen, operatives and laborers, except farm workers. On the other hand, Mexican immigrants have been over-represented in recent years as private household workers, farm laborers and foremen.

Very little systematic data has been collected for Mexican Americans as businessmen in the United States. Taylor (1928:74) described Mexican and Mexican American entrepreneurs in the Imperial Valley of California during the 1920s in the following terms:

“In independent business, there is as yet no indication that Mexican immigrants of laboring-class parentage are entering into competition with Americans, or even building up any considerable business among their own people. In the business community on the Mexican side of the principal valley towns are found some Mexican merchants. Among these are the usual small storekeepers, whose trade is on a very limited scale – grocers, barber shops, service stations, auto repair shops, numerous pool halls, restaurants and even a movie theater.

“Most of these are petty businesses. There are only a very few merchants who conduct stores along up-to-date American lines, either in the appearance of their stores or in financial policy. While in Brawley some of these merchants have been recently admitted to the Chamber of Commerce, the scope of their trade is wholly limited to the Mexican side of town …

“The merchants who successfully follow modern American business methods are almost all middle- or upper-class Mexicans from Mexico and not laboring class immigrants or children of immigrants. Business is not yet proving to be an outlet up the socio-economic ladder.”

Most of these entrepreneurs spoke little English, catered almost exclusively to Mexicans and were in the most vulnerable lines: pool halls (33.3 percent), restaurants (22.8 percent), barber shops (11.8 percent) and groceries (8.8 percent). Combined, these occupations accounted for 76.7 percent of all Mexican entrepreneurial activities in Chicago.

Together with a few bakeries and tailor shops, the figure jumps to 85.5 percent. Except for two jewelers, two hoteliers, two photographers and one drug store operator, accounting collectively for 3.1 percent of the total, all Mexican businesses in Chicago were of low-income socioeconomic status.

The conclusion which flows naturally from these data is that, as the United States developed industrially, comparatively well-educated immigrants, predominantly from Europe, tended to match those urban skills needed in a technological society: professional and technical personnel, managers, officials and proprietors, clerical sales workers, craftsmen, foremen and kindred, as well as operatives and kindred.

The residual labor – that of agricultural and other occupations requiring little or no educational skill – was not desired by Europeans. Phenotypically white individuals from Europe found that, after a brief period in which they were relatively disadvantaged in comparison to the remainder of the population, a melding or blending into the predominant Anglo population took place. We do not mean to imply that ethnic origins were lost, but that from a socio-economic point of view, by 1950 or 1960, few, if any, penalties accrued if one’s parents or grandparents came from Russia, Hungary, Greece or Ireland.

On the other hand, those who came from Mexico were relatively uneducated and unskilled. They were the objects of bitter discrimination because of their brown skin and were stereotyped as being naturally suited for agricultural labor and frequently were attacked by members of white labor unions because of their activities as strikebreakers. Because they spoke little or no English, they often became poverty stricken wards of the state.

Perhaps most important, they were viewed as culturally and physically inferior by Anglo Americans. Being able to operate only on a very low socio-economic level, those Mexican immigrants and their American-born descendants who did not wish to engage in common labor or agriculture turned to very small scale entrepreneurial activities, which would depend upon an ethnic or Mexican national market, i.e. restaurants, groceries, barber and beauty shops. In all these ways, then, they are functionally like Negroes in American society – the pariah.