The Block Report speaks wit’ Ohio death row political prisoner Bomani Shakur (Keith LaMar) about the Lucasville Rebellion, the recent hunger strike that he came off of, the state of Ohio planning to set his execution date and more. Tune in for more at BlockReportRadio.com.

by the Justice for Keith LaMar Campaign 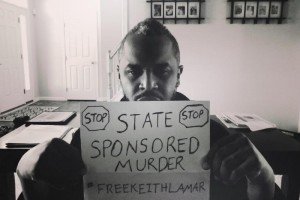 But the much larger fight is still ahead of us. We are asking you to join the fight to #FREEKeithLaMar. We are launching a social media campaign to spread the word far and wide that Ohio hid the evidence that proves Keith’s innocence. We must call for freedom not death.

We ask you to join us in this fight by:

2.  Helping us grow the campaign by posting your own #FREEKeithLaMar photo with a strong message on social media (watch the video to get a sense of the images we are going for).

3.  Forward this email to your own network and contacts.

Guidelines for taking a photo:

Your message for Facebook and Twitter along with your photo could simply be: Join the fight to #FREEKeithLaMar – Watch/share this 2 minute video: https://www.youtube.com/watch?v=LaiDWvwBYzk

It truly will require a mass of people supporting him together to make the kind of impact he needs. Join us in this fight to #FREEKeithLaMar!