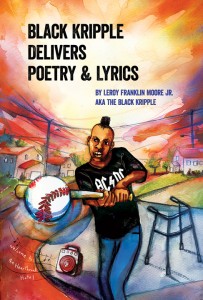 I have known the writer Leroy Moore for about a decade, and ever since I’ve known him he has been on the front lines fighting for the human rights of disabled people, making art about the issues that are important to him and his community or out promoting the work of other disabled artists and scholars. He is currently promoting his newest book, “Black Kripple Delivers Poetry & Lyrics,” so we sat down to delve inside the mind of one of the fixtures on the Bay Area art and activist scene, Leroy Moore. Check him out in his own words.

M.O.I. JR: Can you tell the people, when did you discover that you had a love for poetry?

Leroy Moore: I was always a writer, but when my father took me to go see the Last Poets in the early ‘80s I knew that was it, and it also flipped what my high school teachers were shoving down my throat: white dead men’s poetry.

Since that show in New York, I wrote more and more poetry, but I didn’t come out publicly until the early ‘90s doing the open mic scene with the Po’ Poets of Poor Magazine, then Molotov Mouths and a group that I started for poets and artists with disabilities of color called Voices: Disabled Poets and Artists of Color.

All through the ‘90s, I organized and hosted open mics. I never got into slam poetry and thought that Def Jam Poetry really destroyed the uniqueness of the open mic scene in the ‘90s. Today I write poetry for myself, my community and to talk back to the injustice my Black disabled community is going through.

M.O.I. JR: Who were some of the poets that inspired you? Why?

Leroy: Oh God, so many, but mainly poets who are political like the Last Poets, the Watts Poets, the late Wanda Coleman, Piri Thomas, Gil-Scott Heron, Lynn Manning, Celeste V. White to local Black disabled poets like Lee Williams, Lateef McLoud, Joy Ellen, Leah Lakshmi Piepzna-Samarasinha and the list goes on. The reason why they move me is because of how they face whatever comes to them and write about it with beautiful, bloody words that rock you to sleep and at the same time guide the oppressor’s hand for change and make you fall in love!

M.O.I. JR: What is the name of your new book and what is it about?

Leroy: “Black Kripple Delivers Poetry & Lyrics” is straight up an activist and love book of original poems and song lyrics that have been written and collected for almost two decades. Many poems in this book were first published in 1999 in my chapbook by Poor Magazine’s Poor Press.

This book contains poetry and lyrics of songs. Most of the poems and lyrics touch on issues that Black disabled people deal with but only get a little media attention.

In this book you will find true stories of discrimination, cases of police brutality and love songs for the Black disabled community and my family; poem songs for Black disabled people in history like Curtis Mayfield, Ray Charles, Rev. Cecil Ivory, Johnnie Mae Dunson, Barbara Jordan, Harriet Tubman and many more.

This book also talks back to the Black community, academic scholars and the media on why they do what they do and at the same time tries to uplift the work of Black disabled writers, musicians and others.

M.O.I. JR: How long did it take for you to put it together?

Leroy: Like many of my writer mentors used to tell me, “Writing a book is one thing, but getting it published is a whole different story!” This book has gone through a lot of changes since 1987, plus I had to be realistic by cutting out over 30 poems to fit into what is out now. Of course I added to it and lost many pieces since 1987.

“Black Kripple Delivers Poetry & Lyrics” is straight up an activist and love book of original poems and song lyrics that have been written and collected for almost two decades.

Some of the poems were in my first chapbook under Poor Magazine’s Poor Press in 1999. I was trying to hold out for a Black publishing company and I came close in early 2000s with the Gibbs Foundation of Oakland; however, because of the publisher’s health problems, it didn’t happened.

Then I approached other Black publishers but always ran into the famous rejection letters that would say, “There is no audience for your writings.” A longtime local native poet and friend, Kim Shuck, helped me get my manuscript to James Downs of Poetic Matrix Press, and that’s when the founder of the press called me and said, “Leroy, let’s do your book!” And that all happened this year, in 2015.

M.O.I. JR: How do you feel about the most recent police execution of 26-year-old Mario Woods in Hunters Point?

Leroy: As you know, JR, I’ve long been an activist against police brutality on people with disabilities, and I learned that Mario had a history of mental health disabilities since the late ‘80s, first on the East Coast and all through the ‘90s in the Bay Area up to today. With my cultural work through Krip-Hop Nation producing the first Hip-Hop mixtape on the issue of police brutality against people with disabilities and now a documentary film, “Where Is Hope: The Art of Murder,” I see the shooting of Woods as a continuation of state violence against Black and Brown disabled bodies.

This is nothing new going back to slavery, to being caged in freak shows, to eugenics, to the lynching of Jesse Washington, who was a Black disabled young man of Waco, Texas, in 1918, to today over 70 percent of police shootings are people with disabilities. So although Woods is a tragic case, the abuse and killings especially of Black and Brown disabled people is nothing new.

It doesn’t take seven cops to take down one man, and it’s not an isolated case either. As a Black activist with a disability, I have seen and read in 2015 alone three high-profile cases of police brutality against Black disabled men on the streets of San Francisco, including the recent killing of Mario Woods. In the beginning of the year, we saw Bo Frierson of the Fillmore almost tipped over from his wheelchair by an officer; in August we saw seventeen 17 cops take down Musa Fudge, a Black homeless man with a prosthetic leg in downtown San Francisco; and now the deadly shooting of Mario Woods, a Black man with a history of mental health disabilities in the Bayview district.

Back in 2001 the community fought for police crisis training after the shooting of another Black man with mental health disabilities, Idriss Stelley; however, more than 10 years later, less than half of the department has undergone the training, which has been watered down. That and the funding being snatched away and the recent shooting all point to the fact that the effectiveness of the training has always been questionable and now is seen as a band-aid that was never intended to heal.

The purpose was to keep the public quiet as the institutional culture of police continues to be hidden from the community. Today in 2015, many will not take training as the only answer. It’s time for institutional changes in the police department and on the Police Commission. Bluntly, this was an execution by a gang of police officers of one disabled Black man.

In this book you will find true stories of discrimination, cases of police brutality and love songs for the Black disabled community and my family.

In my new book, “Black Kripple Delivers Poetry & Lyrics,” Chapter Two, titled “Black & Blue: Police, State & the Abuse of People with Disabilities,” talks about police brutality against real Black people with disabilities –including Roger Anthony, who was shot to death just riding home on his bike. This case hit home, because I was pulled off my three-wheel bike by a Berkeley police officer.

Leroy: So far people have loved the book and I think the reason why is that they are learning about a community, history, rights, art, music and the oppression and beauty of a people who have always been here. Also in the back of the book there are 20 trivia questions on Black disabled history.

M.O.I. JR: How could people view it and buy it?

Leroy: Please tell your local bookstore to order it. It should be a crime how Amazon is just killing independent bookstores. Go to http://www.spdbooks.org/Producte/9780986060083/black-kripple-delivers-poetry–lyrics.aspx.