Most Americans welcome the January day off in honor of Martin Luther King Jr. But most know little about what King actually did or thought. Most know that he gave a great speech to a massive crowd in Washington, D.C., dreaming that someday people would be judged by their character and not their skin color. 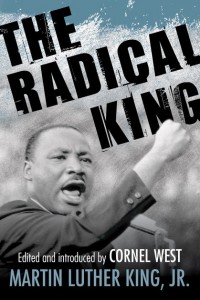 Most also know that King led civil rights marches to get rid of segregation. And most whites believe that he was successful. After all, we have a holiday for King, segregation laws have been unconstitutional and off the books for years, and we even elected a Black president.

In order to be an acceptable national hero, white America has had to sanitize Martin Luther King so that he was not perceived as a threat to anybody, simply as a religious leader filled with love and high principles. “The Radical King,” edited and introduced by Cornel West (Beacon Press 2015) reclaims what King really stood for and reminds us that the battle against white supremacy requires taking on a lot more than white racists.

Martin Luther King Jr. understood better than most the limitations of good intentions and civil rights marches. He understood that abolishing segregation did not mean that Black Americans became free.

The oppression of racism would continue to be as strong as ever as long as the massive inequality in America kept everybody in his or her place. And Dr. King died before the rise of the school-to-prison pipeline and mass incarceration of people of color.

What made King a radical was his increasing awareness that the system had to be fundamentally changed in order for Black people to lead decent lives. Black people could not be free unless there was a challenge to the system that thrived on inequality.

Martin Luther King Jr. demanded radical changes in America. “The Radical King” is a collection of Dr. King’s writings, published as part of the Legacy Series by the King estate. Dr. King’s essays and speeches reflect how his experience with the struggle for freedom here and abroad combined with coming up against the realities of American institutions led him to look for fundamental changes in the economy, power and America’s role in the world.

In recent months the word “radical” has become a nasty adjective used to describe extremists, or someone who has gone off the deep end. For example, terrorist acts are committed by radical Muslims; the Republican Party has been taken over by the radical right; abortion clinics are attacked by radical fundamentalists.

Yet for most political activists, radical simply means seeking fundamental change, going to the root of the problem and proposing comprehensive and far-reaching solutions. When faced with a corrupt and broken system, a radical approach makes more sense than trying to patch over some cracks.

King was a complicated person trying to find a path in an unbelievably difficult and dangerous world. This comes through in his writings and West’s introduction: “The radical King was first and foremost a revolutionary Christian [understanding this as] radical love in freedom and radical freedom of love, a fallible enactment of the Beloved Community.”

At the same time, King looked at social relations and the distribution of power. “King was a democratic socialist who sided with poor and working people in the class struggle taking place in capitalist societies” (xiii*). King reconciled the two approaches: “Power properly understood is the ability to achieve purpose. … Power without love is reckless and abusive. … (L)ove without power is sentimental an(d) anemic (193).

King’s critique of inequality in society was very similar to what we hear now from Sen. Bernie Sanders. King explains:

“Now the problem is not only unemployment. Do you know that most of the poor people in our country are working every day? And they are making wages so low that they cannot begin to function in the mainstream of the economic life of our nation. [I]t is criminal to have people working on a full-time basis in a full-time job getting part-time income (147).”

“Poverty, the gaps in our society, the gulfs between inordinate superfluous wealth and abject deadening poverty have brought about a great deal of tension, a great deal of bitterness (239).”

King’s last years centered on building an independent movement of the poor to demand real jobs or guaranteed income that would make possible a decent life.

When Martin Luther King Jr. was killed in Memphis April 4, 1968, he was energetically supporting a strike by Memphis public employees demanding decent wages. King knew very well that unions and the organization of labor were key to winning social justice and equality.

King’s radicalism was particularly apparent when he became an early vocal opponent of the war in Vietnam and he astutely connected the dots between the war effort and failing social programs at home.

“What kind of nation is it that applauds nonviolence whenever Negroes face white people in the streets of the United States but then applauds the burning and death when these same Negroes are sent to the fields of Vietnam (192).”

“Then came the build-up in Vietnam and I watched the [poverty] program broken and eviscerated as if it were some idle political plaything of a society gone mad on war and I knew that America would never invest the necessary funds or energy in rehabilitation of the poor so long as [there were] adventures like Vietnam. So I was increasingly compelled to see the war as an enemy of the poor and to attack it as such (203).”

“The war was doing far more than devastating the hopes of the poor at home. It was sending their sons and their brothers and their husbands to die in extraordinarily high proportions relative to the rest of the population (204).”

“I knew I could never again raise my voice against the violence of the oppressed in the ghettos without having first spoken clearly to the greatest purveyor of violence in the world today: my own government (204).”

Now that almost everybody recognizes that the Vietnam War was a huge mistake, we forget the courage it took to speak out against it when it was widely supported. Indeed, conservative civil rights leaders and establishment Black folk strongly criticized King or broke from him over his opposition to the War, support for freedom struggles in Africa and even for his concern about poverty in the U.S.

King understood that the war was gutting any possibility to create a real war on poverty – that it was immoral – and it could not be won. But this war was being strongly pursued by a Democratic administration with Republican support, all backed by the white power structure.

King knew that somehow this had to be challenged, and in 1967 he actively considered running for president as an independent candidate with famed pediatrician Dr. Benjamin Spock as his running mate.

Who knows what would have happened if the assassin’s bullet had not taken away the vision and leadership that Martin Luther King Jr. provided? His last book, written in 1967, “Where Do We Go From Here: Chaos or Community,” was another strong statement on the need to challenge the economic system which kept so many poor.

King was attempting to chart out a new level of struggle. His views are relevant today. Bobby Bowens, a ‘60s Black Panther, a lifelong community activist and member of the Richmond Progressive Alliance Steering Committee, organized a study group around this book shortly before he died in 2012. Bobby hoped that this book would provide key guidelines for building a mass movement which could bring real change.

Richmond City Council member Jovanka Beckles works as a mental health specialist for Contra Costa County and serves on the Richmond Progressive Alliance steering committee. She was born in Panama City, where she grew up in a bilingual, multicultural household. Her family moved to the United States in1972, and she has lived in Richmond for the last 16 years. She can be reached at Jovankabeckles@gmail.com. This story first appeared in the Richmond Progressive Alliance newsletter of Jan. 10, 2016.

Another side of King: Black economic power

We have the moral high ground