Jorge Gomez had spent over a decade in Pelican Bay State Prison’s Security Housing Unit (SHU) at the time of California’s historic 2013 Prisoner Hunger Strike. Launched in early July 2013, the strike was to protest torturous and inhumane conditions at Pelican Bay’s SHU and at other isolation and segregation units throughout the state. Over 30,000- plus incarcerated persons participated at its height, with many refusing food for as long as two months.

In the early days of the 2013 Prisoner Hunger Strike, Mr. Gomez refused up to 12 consecutive meals, according to a Detention/Segregation Record (CDC 114-A) maintained by the California Department of Corrections (CDCR). The CDCR struck back, on July 16, 2013, by issuing him a Rules Violation Report (CDC 115). The same fate befell untold numbers of other prisoners1 who’d gone to the extreme length of starving themselves to peacefully call attention to their torture.

In an opinion filed on March 25, 2016, however, the California Court of Appeals ruled that Gomez was guilty of no rules violation for refusing meals during the strike. As a result, respondents for the state, represented by the California Attorney General’s Office, have been ordered to reverse their affirmative ruling on the RVR Gomez received.

The 90 days’ credit Gomez lost as a result of the ruling, which would have effectively prolonged his time spent in prison, must also be restored. Finally, all references to the RVR must be expunged from Gomez’s central file maintained by the CDCR.

The officer who’d written the RVR against Gomez, Sergeant R. Navarro, charged therein that Mr. Gomez’s refusal to eat constituted a violation of California Code of Regulations, Title 152, Section 3005(d)(3), which states: “Inmates shall not participate in a riot, rout, or unlawful assembly.”

Navarro’s RVR was based on the aforementioned CDC 114-A, documenting Gomez’s refusal of meals. Navarro further alleged in the RVR, pursuant to Operational Procedure (OP) 228, an inmate who misses nine consecutive state-issued meals is considered to be on a hunger strike. This refusal coincided with a planned, statewide hunger strike, work stoppage and mass disturbance organized by the prisoners housed in the SHU at PBSP.

The CDCR struck back, on July 16, 2013, by issuing him a Rules Violation Report (CDC 115). The same fate befell untold numbers of other prisoners who’d gone to the extreme length of starving themselves to peacefully call attention to their torture.

Navarro additionally claimed in the RVR that Gomez’s conduct had “caused delays in custody operations and additional workload for custody and medical staff.” These, he indicated, resulted in the delay or cancellation of yard, canteen and law library services, in addition to the cancellation or delay of medical appointments.3

Gomez appealed the RVR, and a disciplinary hearing was held on July 27, 2013, presided by CDCR Correctional Lieutenant D. James. No witnesses testified at the hearing, the Court of Appeals specified in its opinion; such “testimony” as was presented consisted only of Navarro’s written statements in support of the RVR.

In an opinion filed on March 25, 2016, however, the California Court of Appeals ruled that Gomez was guilty of no rules violation for refusing meals during the strike.

Correctional Lt. James did not find that Gomez had violated section 3005(d)(3), even though he claimed in his disciplinary hearing summary that there was a “guilty” plea entered by Gomez. James’s claim of a “guilty” plea was otherwise unexplained by James, the Court of Appeals noted in its opinion.4 The court also noted that Gomez had contested James’s claim of a “guilty” plea entered on Gomez’s behalf in administrative appeals of the disciplinary ruling – insisting that, if he was guilty of anything, it was “not eating and nothing else.”

Instead, James found Gomez guilty of the “equally included offense” of violating section 3005(a). The latter provides: “Inmates and parolees shall obey all laws, regulations, and local procedures, and refrain from behavior which might lead to violence or disorder, or otherwise endangers facility, outside community or another person.”

In its March 25 opinion, the Court of Appeals referenced several precedents holding that the findings made by prison officials at a disciplinary hearing can’t be disrupted – for example, reversed – where “some evidence” exists to support those officials’ findings. Citing the U.S Supreme Court’s decision in Superintendent, Mass. Correctional Inst. v. Hill (1985), 472 U.S. 445 at p. 456, the court conceded that this holds true regardless of whether or not the evidence presented at a disciplinary hearing “logically precludes any conclusion but the one reached” by the disciplinary officials involved.

Nonetheless, the court affirmed that the deferential nature of the “some evidence” standard doesn’t convert courts into potted plants (at Page 12 of its opinion) and ultimately concluded:

“None of [Respondents’] contentions indicate that the facility, outside community or another person was endangered, i.e., put in danger or peril of harm or loss, nor do they indicate that there was a breakdown of order in any aspect of the prison; to the contrary, it is apparent from Navarro’s statements that PBSP authorities were acting within their discretion to make adjustments to workloads and services in order to contend with the hunger strike and work stoppage, and his statements do not indicate that the protest involved any violence or disorderly conduct. Indeed, even assuming for the sake of argument that the disorder prohibited by section 3005(a) did not have to rise to the level of endangering ‘facility, outside community or another person,’ nothing in Navarro’s account of the delays and cancellation of services, and the reallocation of prison personnel, such as to monitor the [health] of the hunger strikers, suggests prison operations were thrown into disorder.”

The opinion on Gomez’s Writ of Habeas (Case No. A142470 (1st App. Dist.)),5 has recently been certified for publication since its issuance in late March. The opinion initially was not certified for publication. But, apparently due to the intervention of Gomez’s court-appointed counsel (appointed on March 17, 2015), as well as the intervention of the National Lawyers Guild and attorney Carol Strickman, on behalf of Legal Services to Prisoners With Children, and the litigation team in the Ashker v. Brown federal class action concerning conditions of confinement at Pelican Bay’s SHU, the Court of Appeals agreed to publish it. This was despite opposition filed on April 15, 2016, by Pamela B. Hooley, counsel for the Attorney General’s Office.

It is possible that the state will appeal the 1st Appellate District’s decision on Gomez’s Writ of Habeas Corpus to the California Supreme Court. It is equally possible, as far as this writer (a non-lawyer) understands, that the state may submit new filings to further resist publication of the 1st Appellate District’s opinion. Publication of the opinion renders it citable as authority under California law.

Yet, should the opinion and its publication stand, the possibility remains that it will assist countless prisoners who received RVRs in connection with their participation in the 2013 Prisoner Hunger Strike. This includes people who are eligible for parole hearings, against whom the Board of Paroles may count as a strike against them any such RVRs they received.

Should the opinion and its publication stand, the possibility remains that it will assist countless prisoners who received RVRs in connection with their participation in the 2013 Prisoner Hunger Strike.

1The Prisoner Hunger Strike Solidarity Coalition and its constituent organizations (including but not limited to California Prison Focus, Legal Services to Prisoners With Children, California Families Against Solitary Confinement and the Human Rights Pen Pal Program) have documented the wide-scale issuance of RVRs to people relative to their participation in the 2013 Hunger Strike.

2All statutory references in this article are to the California Code of Regulations, Title 15.

3Routine cancellations or delays of yard, canteen and law library services, in addition to the cancellation or delay of medical appointments, are endemic within CDCR facitlities. This had been documented by California Prison Focus as well as by other organizations. Note: California Prison Focus will soon be updating its website to bring it into the contemporary era via a new URL.

4The court specifically remarked as follows: “We can think of no reason why the senior hearing officer would reach [the conclusion that Gomez was not guilty of violating section 3005(d)(3)] if Gomez were pleading guilty to the legal violation brought against him. The only logical conclusion that can be made from these circumstances is that Gomez admitted that he was “guilty” of refusing … consecutive meals …. There is nothing on the record to indicate that Gomez pled guilty to the charge that he violated section 3005(a).”

5The opinion is available at http://www.courts.ca.gov/opinions/documents/A142470.PDF.

Kim Rohrbach, a volunteer with California Prison Focus and the Prisoner Hunger Strike Solidarity Coalition and a paralegal, can be reached at kmrx@earthlink.net. 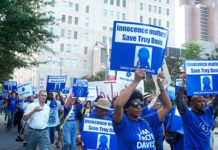