In the streets of Oakland since the ‘90s, there has always been talk about this super dope female MC, who’s government name at the time was Cyndi, being one of the main inspirations for the political lyrical kingpin Boots, the frontman of the Coup. I could never find nothing on her – no tapes at the record store, no write-ups in 4080 or Murder Dogg, Vibe or the Source, and she didn’t do shows at the spots that were popular in the ‘90s like the Upper Room or Maritime Hall in San Francisco. We were already good friends by the time I realized who she was.

Sia Love’s debut hip hop album, “For the Record,” was released last month. The production on the album goes from ‘80s pop to the ‘90s sound of Hip Hop to the traditional stringed instruments and drums of Africans from Latin America. Her vocals are rhythmic, strong, soothing, confident and filled with wisdom.

One of my favorite songs on the album is Angelitos Negros, which is a popular cover song that Sia sings in Spanish. Check out this flame on the rise in her own words.

Sia Love: I started rapping in high school with a group called Cell Dwellaz. I was the sole female MC with two guys and a DJ. We performed locally, eventually got a manager and shopped a demo, but we split up before anything could come of it.

M.O.I. JR: Boots from the Coup told me back in the day that you influenced his style. When did the two of you meet?

Sia Love: I met Boots when I was rapping in high school. He had the Mau Mau rhythm collective and somehow we met and used to hang out at his dad’s house. It was a nice time. I don’t remember if he was rapping when we first met.

I remember it being a political organization that turned musical, if my memory serves me correctly. I didn’t know I had that kind of impact on him, but he did shout me out on his first album by my former name “Cyndi.” And we had a close bond until I went away to college and he became more entrenched in his career. Then we lost touch.

M.O.I. JR: Why did it take this long for you to come out with a debut album?

Sia Love: Well, my debut EP was in 2014, but it was spoken word and reggae. I consider that kind of a warm-up, and now this EP is me accepting my talents as a rapper and growing as a singer.

You know, I wrote my first rap in fifth grade. I loved rap and hip hop until middle school. I started becoming interested in other things, but a very good friend, Charles Lyle kept me focused by introducing me to so many different styles of rap music.

I regained interest by high school, but it was mostly for fun. The fact that we got a manager and shopped a demo was really just a happy side effect. I wasn’t that serious – just going along for the ride. In college, without my partners to collaborate with and vibe with, I started to focus on other things. Plus rap started taking another turn that I didn’t understand.

When I became a teacher, Askari X’s daughter was one of my students, Haniya. I loved to hear her rap because she reminded me of myself. One day I confided in her that I used to rap and she told me that her mother still does. That rekindled my interest to continue, but I had a lot of personal work to do before I would completely embrace my talents again.

M.O.I. JR: Who did the production on it? What does it sound like? Who do you feature on it?

Sia Love: Well, one of my former rap partners from high school, Andre Neal, helped with the bulk of the production. He coached me vocally to get me comfortable with my delivery on “For the Record” and “Good Girl.”

Although I wrote all of it, I was still hesitant to take command of it. “Good Girl” was a poem that Andre helped me expand into a song by suggesting that I repeat certain phrases and refrains that already existed within the poem. He also found a bassist to reinforce the tracks.

“Angelitos Negros” is a cover that I had performed with David Goodlett and Kele Nitoto prior. Our chemistry had made it into the rendition that you hear on the EP, but what is different is that I asked Andre to program some drums for it in addition to Kele’s. That was my vision to give it a more up tempo, hip hop sound. Not sure it comes off as hip hop, but it still gives a nice flavor that I haven’t heard yet, although many people have covered this song.

I feature K.nightshift. He wrote and performs the chorus on “For the Record” song. I am very pleased with his presence on the track. It’s beautiful.

I would describe this EP as hip hop and world due to “Angelitos Negros.” I live for African Diaspora culture and music, so I will always feature music from around the world. On my first EP, I composed an original reggae song called “Sweet & Lovely” in which I use some French and Creole phrases.

M.O.I. JR: What do you want out of being a musician?

Sia Love: I love the immediate reciprocity of performing live. People tell you right after the show how much your performance means to them and thank you for it. I love that.

I also enjoy being able to bring every aspect of who I am, and music allows me to do that. I use music as a platform to speak and give workshops. People are interested in the process of creating as an independent artist. They are interested in unlocking and sharing their creative processes and they want to talk about love and music.

These are the topics I address both in music and as a speaker and teacher. So being a musician gives me everything I want out of life. And I give to it by dedicating myself to professional development as a writer, performer and singer.

Sia Love: I don’t know how my parents’ artwork has influenced my music. I grew up listening to a lot of soul and R& B. Obviously the arts were embraced and promoted in the BPP, considering the newspaper and the Lumpens music group. So I’m sure my upbringing as a cub is influencing my artistry, but I haven’t analyzed it yet.

I am definitely anti “art for art’s sake” when it comes to my music. I definitely see how immensely powerful music is and am committed to using that power to enhance the beauty in life. I like my music to have meaning, but it is not always so obviously revolutionary, as I was also raised with the importance of meditation, yoga, spiritual fitness. I infuse my art and music with all of that.

Sia Love: Art was everywhere in my childhood. My grandmother’s house. Two of my mother’s siblings were also visual artists. My aunt and grandmothers were writers and storytellers.

I have an early memory of going with my mother, aunt and grandmother to the museum to see an exhibit of artists from the Harlem Renaissance. It was a big deal! When they found out the exhibit was here, they were very excited to go and it was one of the best museum experiences I have ever had because they were so happy to be there, and my mother took time to explain details and the importance of what I was seeing.

I was raised that art should have meaning. I saw for myself in that one experience how art can galvanize, energize, reinforce community and identity. Art was extremely important to my family. As for music specifically, I remember listening to Minnie Riperton and staring at her album, wanting so desperately to meet her.

I would not accept that she had already passed away. It actually broke my heart as a child to finally accept that she was gone before I could know her. You see how impacting music and art is? I was a child of 8 or 9 so mesmerized by the spirit in this woman’s voice that it saddened me to not know her.

I teach my children by what I expose them to. They know Etta James and Eartha Kitt songs by heart because I had it in heavy rotation throughout their early years. They admire these women due to the beauty and power of their voices.

They know the greats, the classics: Stevie Wonder, Prince, Michael Jackson. When newer artists borrow a style, phrase or sample from an older artist, I point it out and show them where it came from. This is an education on music as much as it is on history and the concept of lineage.

Nothing is created in a vacuum. My children know international music too because I keep them surrounded by it. I don’t know how they look at music, but I know that they are aware of its magic.

M.O.I. JR: Where can people get your music? 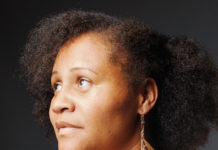