Erika Rocha was 35 years old and one day away from her Youth Parole Hearing on April 15, 2016, when she committed suicide at the California Institution for Women (CIW) in Corona. Since her death, the suicide crisis at CIW has only worsened. 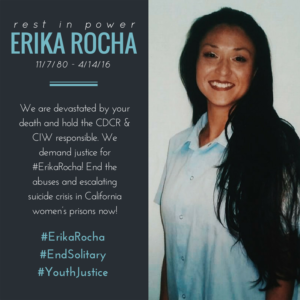 Erika was 14 years old when she was charged as an adult in LA County. As a Latina youth, she was 43 percent more likely to be tried as an adult.

Interrogated by police and prosecutors and threatened with a double life sentence for attempted murder, she pled to 19 to life. Erika was 16 years old when she was sent to state prison in Chowchilla. Prison staff placed her in solitary to “protect her” until she was 17, but she told CCWP that guards admitted they kept her there to protect the prison because she was too young to legally be there.

At the time of her death, Erika was serving her 21st year of incarceration. She suffered from deplorable treatment for mental health issues attributable to her incarceration as a youth, including at least four indefinite terms of 23 years each in solitary confinement.

Erika sought support for her mental health and trauma throughout her incarceration. The California Coalition for Women Prisoners (CCWP) continues to gather information, but we know that in the weeks before her death, Erika was transferred to suicide watch at least three times. The day before her death, she was released from suicide watch and placed in a mental health unit.

In 2015, the suicide rate at CIW was more than eight times the national rate for people in women’s prisons and more than five times the rate for all California prisons. In January 2016, a court-ordered suicide prevention audit concluded that CIW “continued to be a problematic institution that exhibited numerous poor practices in the area of suicide prevention.”

In 2015, the suicide rate at CIW was more than eight times the national rate for people in women’s prisons and more than five times the rate for all California prisons.

We are very concerned about the conditions that led to Erika’s death, as well as its impacts on the escalating crisis at CIW. A week after Erika’s death, another suicide was reported and at least 22 more people transferred to suicide watch. 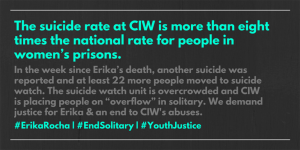 CCWP Program Coordinator Windy Click, who met Erika in prison when she was 19, said, “Erika was always seeking help. She was lost inside an adult facility not knowing what the future held. When she asked for help, they didn’t bother to help her.”

Upon hearing the news of Erika’s suicide, a friend of Erika’s who was also sent to state prison at 16, said: “Erika’s death is a painful example of how the criminal justice system is broken and therefore breaks people. They did this to her. She obviously couldn’t see any future for herself.”

CCWP Program Coordinator Windy Click said, “Erika was always seeking help. She was lost inside an adult facility not knowing what the future held. When she asked for help, they didn’t bother to help her.”

“Erika’s death is a painful example of how the criminal justice system is broken and therefore breaks people. They did this to her. She obviously couldn’t see any future for herself.”

Despite decades of lawsuits to remedy prison health care and court orders to reduce prison overcrowding, the ongoing inhumane conditions lead to tragic and untimely deaths. To reverse the crisis at CIW, CCWP calls for the following immediate actions:

In honor of Erika, we ask that supporters of youth justice:

As President Barack Obama wrote earlier this year about Kalief Browder’s suicide post-incarceration, “How can we subject prisoners to unnecessary solitary confinement, knowing its effects, and then expect them to return to our communities as whole people?”

We are devastated and enraged that we did not get the opportunity to welcome Erika Rocha back into our communities. We demand justice for Erika and an end to the suicide epidemic CIW has created for its most vulnerable people inside. 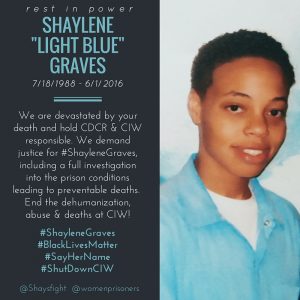 On June 1, yet another young woman of color died at the California Institution for Women (CIW). Her name is Shaylene Graves and she was 27 years old and six weeks away from returning home to her loving son, family and friends.

CCWP is working with Shaylene’s family to hold the California Department of Corrections (CDCR) and CIW responsible for her death. In the wake of Shaylene’s death, the prison continues to mistreat her grieving family and friends and to evade responsibility for failing to save lives.

We are asking for your continued support in demanding an end to the dehumanization, abuse and preventable deaths at CIW.

Please help us demand an investigation into the preventable deaths at CIW, including the ongoing suicide crisis. We encourage connecting this push to mobilizations to #SayHerName and #BlackLivesMatter.

Also, if you have personal connections with members of the California Senate Rules Committee, the assembly speaker and/or the governor, please also make a call in honor of Shaylene Graves and Erika Rocha, as well as the many people who have attempted suicide at CIW this year alone, and ask them to support our demand for an investigation. These three government bodies are now the only ones authorized to order a state prison investigation. 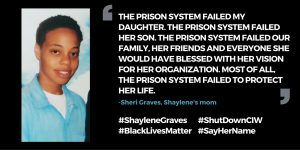 Sign these petitions to demand investigation into the suicide epidemic at CIW women’s prison in California: