by Gerald A. Perreira

It has been at war with itself and with the entire non-European world for centuries. Long before anyone heard of Jihadists, Al-Qaeda and ISIL, Western Civilization was at war. Long before Osama Bin Laden in Afghanistan, Saddam Hussein in Iraq, Muammar Qaddafi in Libya or Bashar al Assad in Syria, Western Civilization was at war with the entire rest of the world.

Western Civilization has mastered the art and technology of warfare. They are the quintessential warlords, despite the fact that they love to attribute this term to non-European leaders, especially Africans. There is no civilization on the face of this earth that has waged war more relentlessly and permanently than Western Civilization – this is not opinion; it is an indisputable historical fact.

Then there was the Thirty Years War (1618-1648) involving the majority of European nations. Military historians estimate the death toll to be at least 8 million. Then we had the two great European tribal wars, erroneously referred to as World War 1 and World War 2, in which the colonized were roped in to fighting alongside the various North Atlantic tribes.

Sadly, today many of us are still fighting on the side of the various North Atlantic tribes to further the aims of Empire and in the process subjugate and destroy our own peoples. So-called World War 1 claimed the lives of 38 million people, while the other so-called World War – one of Europe’s most genocidal tribal wars – left more than 60 million dead.

The West turns on the rest

After bleeding themselves for centuries and committing genocide on their own people, they turned on the Indigenous peoples throughout the world, committing an unprecedented act of genocide, and then instigated the horrific Trans-Atlantic trade in captured Africans, resulting in the death of untold millions of Africans. This was a war like no other – a war that is still raging on the streets of every town and city in modern day USA, where the descendants of those captured Africans are routinely gunned down by the police in the streets.

This year alone, U.S. police have killed at least 136 Africans, Alton Sterling and Philando Castile being the latest victims. In 2012, the Malcolm X Grassroots Movement released a report titled “Operation Ghetto Storm,” in which they documented the fact that every 28 hours in 2012 someone employed or protected by the government killed a Black man, woman or child.

This is none other than a war being waged by white corporate America and its racist institutions on the poor and disenfranchised. Following the fatal shooting of five police officers in Dallas, Texas, on July 7, President Obama had this to say: “There’s been a vicious, calculated and despicable attack on law enforcement … I believe that I speak for every single American when I say that we are horrified over these events and that we stand united with people and the police department in Dallas.”

Despite the fact that many of the Africans shot by police in the U.S. have been executed at point blank range, and that a recent victim, Tamir Rice, was only 12 years old when he was shot to death in a playground, no U.S. president, including Obama, has ever spoken about the killing of Africans in America in this tone, using appropriately harsh words.

And when three more police officers were shot and killed in Baton Rouge, Louisiana, on July 17, President Obama had this to say: “I condemn, in the strongest sense of the word, the attack on law enforcement in Baton Rouge. For the second time in two weeks, police officers who put their lives on the line for ours every day were doing their job when they were killed in a cowardly and reprehensible assault. These are attacks on public servants, on the rule of law and on civilized society, and they have to stop … And make no mistake – justice will be done.

“We may not yet know the motives for this attack, but I want to be clear: There is no justification for violence against law enforcement. None … These attacks are the work of cowards who speak for no one. They right no wrongs. They advance no causes. The officers in Baton Rouge, the officers in Dallas – they were our fellow Americans, part of our community, part of our country, with people who loved and needed them and who need us now – all of us – to be at our best.”

Anyone reading these statements can see that Barack Obama is clear about whose side he is on in this war. In the face of the horrific statistics regarding the number of Africans shot this year alone by police, let alone decades of police brutality and murder directed against African communities throughout the U.S., Obama deliberately fails to connect the dots. He dare not. As the Black face of white supremacy and Western Civilization’s ongoing war, this White House Negro better keep his story straight and keep to his script.

After all, during his presidency he chalked up a victory for Western Civilization’s war that compares with few others. He authorized and colluded in the brutal murder of Muammar Qaddafi, one of Africa’s finest leaders. He joined with his Western European allies to destroy Africa’s most prosperous country, in a bid to prevent Libya from leading the entire continent to its long awaited destination of a United States of Africa.

This was a huge moment for Western Civilization’s war effort, since a United States of Africa, with its own currency, backed by its own gold, would have definitely humbled Western Civilization. It would have brought about a cataclysmic shift in global power relations – which is why Muammar Qaddafi was targeted for annihilation.

These two young men were trained to be killers in the ongoing, never ending war waged by Western Civilization. Obama needs to tell us: When U.S. forces bomb wedding parties in Afghanistan and entire apartment blocks in Iraq, killing and maiming men, women, children and the elderly – are these attacks not the work of cowards who speak for no one?

Have these wars waged by Western Civilization righted any wrongs? What causes have been advanced by the unleashing of unimaginable terror and genocide on the populations of Afghanistan, Iraq, Libya and Syria to name just a few of the most recent targets of Western Civilization’s ongoing war.

We need to remind Newt Gingrich that those he charges with the crime of waging war on Western Civilization – “the terrorists” and so-called “jihadists” – were and continue to be organized, trained, armed and financed by Western Civilization’s intelligence agencies and the intelligence agencies of their allies – Saudi Arabia, Qatar and Pakistan. Let us not forget that Ronald Reagan referred to the “jihadists” who were fighting the Soviet troops in Afghanistan at that time as freedom fighters.

In fact, it was Ronald Reagan who popularized the concept of jihad in Western political circles. These same jihadists were the forerunners of Al Qaeda and ISIL and have been used and manipulated by Western Civilization’s intelligence agencies to fight a number of their dirty wars, leaving behind nothing but mayhem and destruction.

After the defeat of the Soviet Union in Afghanistan, the Arabs who fought with the Afghan mujahideen, all of whom were supported and armed by Western Civilization’s various agencies, returned to their respective countries. Armed with their reactionary Wahhabi ideology they launched “jihad” against what they referred to as “secular” regimes.

After all, Al Qaeda means “the base” and refers to the original database created by the CIA when they were backing these so-called jihadists in Afghanistan. It was their base and they had full access to it.

No meaningful analysis can be made of events taking place in 2016 if we do not have knowledge of the past. We must research and study “his-story” and “our-story” in order to be able to devise an effective strategy of resistance.

Who is to blame? 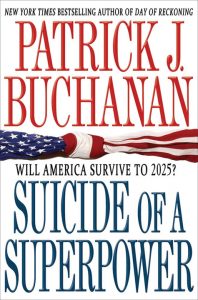 The creation of bogeymen is a strategy they have used since the beginning of their onslaught to distract us from the real enemy – themselves. It would be comical if it wasn’t so tragic to watch as they attempt to portray Russia and Vladimir Putin as the new evil. I suspect that in the age of the internet, even those who in the past absorbed Western Civilization’s propaganda as if it was gospel truth are growing weary.

Following is an excerpt from “Suicide of a Superpower: Will America Survive to 2025?” The book was written by populist conservative Pat Buchanan.

Unlike politically correct liberals like Barak Obama and Hillary Clinton, who never tell it like it is but rather weave a deceptive narrative to further Western Civilization’s prolonged war, and the likes of Newt Gingrich and his gang, who like to throw around words and concepts without having any knowledge whatsoever of the history of Western Civilization, Pat Buchanan, although a staunch defender of Western Civilization, is courageous enough to lay the blame where it rightfully belongs.

Perhaps his honesty is motivated by his understanding that the very survival of Western Civilization is in jeopardy if it continues on its present trajectory. In his words: “We fail to understand what motivated our attackers. They did not come to kill us because they abhor our Constitution or wish to impose Sharia on Oklahoma.

“They were over here because we are over there. They came to kill us in our country because we will not get out of their countries.

“Terrorism is the weapon of the weak who wish to be rid of foreign domination. From Plains Indians to Afghan mujahideen, from Menachem Begin’s Irgun to the Algerian FLN, from the IRA of Martin McGuinness to the ANC of Nelson Mandela, it has ever been thus. Terrorism is the price of Empire.”

While this self-evident truth is abundantly clear to the rest of us, it is important to note when this truth is finally articulated and documented by one of their own. If this war is ever to end, then Newt Gingrich and the rest of Western Civilization must face their own demons.

Gerald A. Perreira is a writer, educator, theologian and political activist. He is chairperson of the Guyanese organizations Black Consciousness Movement Guyana (BCMG) and Organization for the Victory of the People (OVP). He is an executive member of the Caribbean Chapter of the Network for Defense of Humanity. He lived in Libya for many years, served in the Green March, an international battalion for the defense of the Al Fateh revolution, and was a founding member of the World Mathaba, based in Tripoli, Libya. He can be reached at mojadi94@gmail.com.