Policies that could be used to assist the African-American community with preferences for obtaining subsidized housing are being shredded in the name of fair housing laws used, under the Obama administration, to oppose concentrations of poverty.

One recent case in San Francisco reported by the SF Chronicle helps to shed light on what is happening after HUD rejected a housing plan to help people stay in the neighborhoods they have lived in for generations. HUD’s rejection will have an immediate impact on who will be selected to move into a new development at Turk and Webster streets known as Willie B. Kennedy senior housing.

In this case, according to the Chronicle, a plan was conceived to set aside 40 percent of units for people who live in the district where the new 98-unit subsidized housing development is planned to open this fall, by giving the locals better odds in a lottery. The plan that was rejected by HUD places affordable housing advocates at odds with fair housing laws.

In a letter to HUD, Lee Olson of the Mayor’s Office of Housing and Community Development wrote, “The program’s goal is to provide existing residents the choice to stay within their communities when market rents rise rapidly.”

However, according to the report, “The Department of Housing and Urban Development (HUD) has rejected San Francisco’s neighborhood housing preference plan (better odds in the lottery), which will have an immediate impact on the city’s attempt to use policy to stem the exodus of African Americans and members of other minority groups from neighborhoods that are rapidly gentrifying.”

Policies that could be used to assist the African-American community with preferences for obtaining subsidized housing are being shredded in the name of fair housing laws used, under the Obama administration, to oppose concentrations of poverty.

A spokeswoman for the mayor, Deirdre Hussey said, “We urge HUD to reconsider their objections to San Francisco’s neighborhood preference program and allow us to prioritize keeping people in the neighborhoods where they have built a life and have strong community connections.”

“Board of Supervisors President London Breed, … who grew up in public housing, called the HUD decision ‘devastating.’ Breed said she has been working with older constituents who were optimistic that the neighborhood preference would give them a better chance to get homes in the new building.

“’This is more than a huge disappointment,’ Breed said. ‘These are seniors sleeping on friends’ couches, staying with their kids, living in (residential) hotels. This community has been falsely promised so much. With the neighborhood preference they thought they would have a real shot,’” the Chronicle reported.

A different proposal by HUD and the Obama administration that is allegedly meant to combat segregation and break up concentrations of poverty actually threatens Section 8 renters (Housing Choice Voucher holders) – the elderly, poor and disabled – with higher rents and eviction sometimes even without any long term care planning. It has many Section 8 tenants worried about their future in New York and elsewhere.

According to the Center on Budget and Policy Priorities, there are 2.2 million low-income households receiving assistance to pay their rents from federal rental assistance through the Housing Choice Voucher Program, commonly called Section 8. 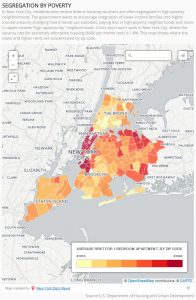 A report by the New York Daily News, headlined “EXCLUSIVE: Explosion of homelessness predicted for Obama administration voucher plan to desegregate low-income tenants,” reveals that a number of critics are very concerned about the new HUD proposal because it would force Section 8 tenants to pay more in rent for their subsidized rental housing if they reside in neighborhoods with concentrations of poverty, or poor people.

According to the report, “HUD wants to make the maximum rent level eligible for subsidy to be zip-code specific. That would lower the amount paid out in high-poverty areas, where average rent is lower, and hike the subsidies in more affluent areas.”

Imagine that. A new policy may be instituted in which poor Section 8 voucher holders will be attacked by the federal government and forced to pay higher rents, because they reside in neighborhoods where other poor people live. This sounds like something Franz Kafka would have written about if he were still alive.

The proposal is of much concern to most poor Section 8 renters in California and elsewhere because SB 1053 failed to be enacted into law in California, and in most states it is still totally legal for landlords to discriminate against Section 8 voucher holders who want to rent one of their housing units. In fact, there are only eight states across the nation, including the District of Columbia, that have laws making it illegal for landlords to discriminate against Section 8 applicants.

The new HUD proposal appears crazy because, while it intends to break up concentrations of poverty – or housing segregation by poverty – the poor Section 8 tenants would have the forced option of staying in their homes and paying a much higher portion of the rent out of their pocket or they could try to move to a wealthier neighborhood. They can avoid paying more rent if they move, but can they find a landlord willing to accept Section 8 in a neighborhood where landlords typically do not want Section 8 voucher holders?

Not only is it nearly impossible to find housing that will accept Section 8 in “nicer,” whiter, wealthier communities due to prejudice against tenants who are poor and/or people of color, but most Section 8 voucher holders, who are poor by definition, lack the resources for security deposits and the cost of moving.

Then, if Congress continues to cut the budget for HUD’s subsidized housing programs, the Section 8 tenants who managed to move to the wealthier neighborhoods would nevertheless be forced to pay more rent when HUD cuts the subsidy that goes to the landlord. The tenants, who are supposed to be paying only 30 percent of their income for rent, would have to pay out of pocket a large enough supplement to add up to the established rent amount, unless – and this is unlikely – the landlord reduces the rent.

In essence, if enacted into law, the HUD proposal would actually penalize poor Section 8 voucher holders for residing in low-income communities, which is where most Section 8 tenants presently reside. Poor people should not be penalized by a program intended to help them. The result would be the same as imposing a new federal tax on the poor, just because they are poor.

The opposition in New York to the new HUD proposal to penalize Section 8 voucher holders in low-income communities includes the Legal Aid Society, Community Services Society, New York Housing Conference and the entire New York City congressional delegation. Among the most vocal are Congresswoman Nydia Velasquez, who calls the proposal unfair to tenants, and New York City Councilman Ritchie Torres, who calls it the biggest threat to the city’s affordable housing.

In essence, if enacted into law, the HUD proposal would actually penalize poor Section 8 voucher holders for residing in low-income communities, which is where most Section 8 tenants presently reside.

Of the 119,000 Section 8 vouchers in New York City, the highest number of any city, critics “predict disaster, estimating that the change could wind up forcing 55,000 lower-income households now receiving vouchers out on the street,” the Daily News reports. The Wall Street Journal also reported on the HUD proposal and the opposition to it.

In Oakland, the East Bay Times reported that of the 609 residents who received a Section 8 voucher in 2015, only 115 people had managed to find a home in Oakland with their voucher. The problem was not HUD’s new proposal to break up concentrations of poverty but instead a HUD plan to reduce Section 8 subsidies. It was strongly opposed by City Council President Lynette Gibson McElhaney and Councilwoman Desley Brooks.

In February 2016, the San Francisco Chronicle reported how hard it is in the Bay Area to find housing with a voucher because of astronomical rent increases that spread from San Francisco to cities throughout the area. The story quotes Rochelle Richard, a Section 8 tenant in East Oakland who must move to avoid a $300 a month rent increase: “I have been to Antioch, Vallejo, Fairfield, Marin, San Rafael, San Leandro, San Lorenzo, Hayward, Richmond, Point Richmond – a two-bedroom for $1,500 (the highest amount she can afford) doesn’t exist.”

In response to pressure from East Bay officials, HUD has raised the fair market rents for one- and two-bedroom housing units in Alameda and Contra Costa counties by 35 percent, enabling more Section 8 renters to find homes, the Chronicle reported.