If there was ever a time to organize around a United Front Against Fascism, it is now. The next leader of the “free world” has just been “elected” – more like “selected” – to be president of the United States. He has thereby been given the authority to use power and weapons as he sees fit.

This same so-called president-elect has shown limitless disdain for all who are not white, heterosexual and Christian, including but not limited to Muslims, Jews, the poor and disenfranchised, women, members of the LGBTQ community, African Americans and Mexicans.

The election of Donald Trump has created an atmosphere of anger, hatred, fear and mistrust that has resulted in a rise in acts of violent crimes in American cities and towns. There has been a huge increase in overt acts of racist, religious and homophobic violence and harassment perpetrated against Blacks, Mexicans, Muslims, Jews and members of the LGBTQ community. At this time, since the announcement of the election results, this is estimated to be close to a thousand in number.

On the other hand, in response to their anger and surprise at Trump’s election, many outraged people have taken to the streets and there have been demonstrations nationwide on a daily basis. Most are at a loss as to what to do with their fear, anger, frustration and disappointment with the outcome of this election and have taken to the internet and social media to engage in enumerating the many causes and pointing fingers to lay blame.

I view this as a teaching moment in history for people in this country. Ethics and morality appear to have slipped away, but they have actually been given away and have resulted in the present-day situation. Now is the time to snatch them back. How do we accomplish that?

If there was ever a time to organize around a United Front Against Fascism, it is now.

We need to organize our communities to utilize whatever ability we have to create change. Working within the limited scope of power of our severely disabled voting system, we have to remove and replace the individuals on local non-functioning boards of supervisors, city councils and school boards who do not represent or serve the interests of the people who elected them. We need to vote in progressive mayors and fair judges, district attorneys and sheriffs and we need to push for community control of law enforcement agencies.

But there is more that we must do. We must realize that in order to be able to accomplish anything, it is necessary to organize coalitions across racial, ethnic, religious and gender identity lines with the essential understanding that we are all commonly oppressed victims of a criminal and immoral capitalist ruling class. Unless we recognize this fact, we will be unable to dispel the growing horror that could be our fate.

Within coalitions such as the former United Front Against Fascism, people would be better equipped to fight against the corporate powers that control the mass media. People need to encourage their communities to boycott television shows that promote violence and greed and glorify racism, discrimination and the exploitation of people by the corporate one percent. People should boycott businesses and products that sponsor and promote garbage and endless mind-sucking that poses as entertainment for our communities.

It is necessary to organize coalitions across racial, ethnic, religious and gender identity lines with the essential understanding that we are all commonly oppressed victims of a criminal and immoral capitalist ruling class.

We absolutely cannot afford to adopt a “wait and see” approach, hoping that “things will get better” or that this ego-maniacal, wealthy president-elect and his hand-picked, racist cabinet members are just “joking.” Trump says he plans to build a wall between Mexico and the USA, deport millions of immigrants and force all Muslims to register, for starters.

Well, I take him at his word. There are waiting concentration camps and prisons, and it is not too far a stretch to imagine them filled. This country did that before to the Japanese and others not so very long ago and refused to grant entry to most Jews fleeing Hitler during World War II. This country has been waging war against Native Americans and Blacks since Columbus landed.

We absolutely cannot afford to adopt a “wait and see” approach, hoping that “things will get better” or that this ego-maniacal, wealthy president-elect and his hand-picked, racist cabinet members are just “joking.”

As caring, ethical and moral human beings, we must take a stand and participate in immediate actions of support for the people who are risking their lives daily on the front lines at Standing Rock. Words of solidarity are not enough as the need for supplies and funds is urgent.

The present government has been actually perpetuating the problems at Standing Rock and will not help them fight against the pipelines which many – like Trump – have an interest in seeing constructed. The situation at Standing Rock is proof positive of how dire the need is for a United Front Against Fascism.

The call to action is an historical reminder of one of the points of the Ten-Point Platform and Program of the Black Panther Party: “We demand the right to determine the destiny of our Community and an end to the robbery by the capitalists of our Community.” The BPP addressed this issue on behalf of all oppressed groups, not just the Black community.

Working class people must organize across all ethnic, racial, religious and other lines. The need to organize is NOW – students, workers, the homeless and disenfranchised and all genders and identities. Recognize that many fascist forces have accelerated their organizing, including the KKK, white citizens’ councils and many more, emboldened now, more than ever, by the election of Trump.

“We demand the right to determine the destiny of our Community and an end to the robbery by the capitalists of our Community.” The BPP addressed this issue on behalf of all oppressed groups, not just the Black community.

There are prisons and concentration camps waiting. The ruling class has control of the seats of power in America, and they have made it very clear that they have no concern for Blacks and any people who aren’t in the 1 percent – white, male, Christian and heterosexual – in this country or any other country worldwide.

As thinking, aware human beings of conscience, we need to organize and, I repeat, learn about and follow the example of the former United Front Against Fascism: Organize, for all our lives and the lives of our children and grandchildren depend on it. 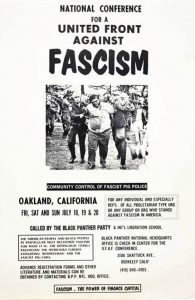 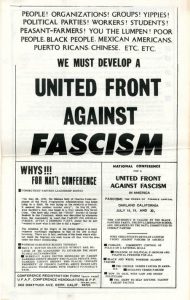 Elbert “Big Man” Howard is one of the six founding members of the Black Panther Party and is an author, lecturer and community activist in Sonoma County. He can be reached at bigman0138@aol.com.