The Bay View met Coyote years ago when he was locked up in Nevada and sent us one of his brilliant commentaries on the evils of imprisonment. We rejoiced with him when he was released and ask readers to support him now as he’s locked up for doing the right thing. Donate what you can at https://rally.org/supportcoyoteacabo. 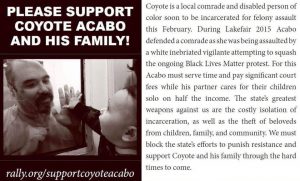 The bare-bones background: Coyote Acabo caught a felony assault case in July of 2015 during a Black Lives Matter protest while defending a comrade who was put in a chokehold by a white inebriated man enraged that his good time country music show was interrupted by a group of cacophonous, banner-bearing protesters. We were drawing attention to the vicious and historic police brutality levied against Black people U.S.-wide, and specifically against Andre Thompson and Bryson Chaplin locally, who were both shot in the back because they purportedly attempted to boost some beer from Safeway and ran from the police. Because attempted shoplifting is punishable by shooting, right?

Now, let’s back up 19 years. Coyote was a 19-year-old Nevada Latino gangbanger named Casper who was sentenced to prison for four years for stabbing another kid with a steak knife after five members of an opposing gang tried to jump him. That prison term would ultimately stretch to 16 years of maximum security, wherein Coyote would become radicalized, start the first prison-based chapter of Anarchist Black Cross, and prolifically read, write and outreach to other prisoners.

Coyote and I met in 2014 in a workshop for prisoner support on the campus of Evergreen State College in Olympia, Washington. Coyote was only a few months out of prison.

I married him. Not because I was victimized, not because he was perfect, not because either of us were able to magically rise above our pasts and enact wildly different scripts, but because he showed up and changed his entire life to be there for his child, and because he not ever for one day gave up on trying to be a better person for his family and community.

And now Coyote serves nearly three months for some bullshit. Some legal bullshit that says law and order matters, but only for white people who value mediocre country music over Black lives.

Who wins? The police. They targeted him, they charged him, and now, nearly two years later, they are locking him up, a sickening retraumatization of being charged for assault in defense against an assaulter.

Because the state will take him, and strip him, and cage him, and charge his beloveds to speak to him or see him on a small cheap screen. Because for months our wondrous, vibrant, mischievous toddler will wonder what the fuck happened to Dada.

Because Coyote needs books to read, to keep working on himself despite the terrible undertow of incarceral adversity, to imagine better possibilities. Because regardless of what evil assumes the latest head of state, fierce, enduring, creative love trumps hate.

And because that drunken fuck of a white guy who put a woman in a chokehold because he didn’t want to stop listening to some live country drivel long enough to reflect on systemic racism shouldn’t win, and neither should the system of historic and currently racist legally armed forces against yet another person of color.

Please give what you can. Against racism. Against incarceration. Against abuse. For resistance. For healing. For love. For possibility. For radical change, interpersonally and systemically. For my brave, wild, hurtful, dogged, earnest beloved, flaws and all. For our innocent child. For our family. And for your family, now and in the future, as we rage, muddle, and rise together against the evil that settles overtly over us all in the terrifying times to come.

Gratitude, love and strength for your time and consideration.

To learn more and to support Coyote and his family, go to https://rally.org/supportcoyoteacabo.