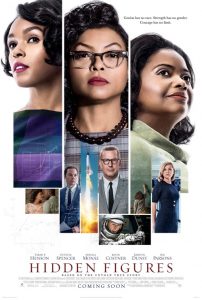 Scientists Katherine Johnson, Dorothy Vaughan and Mary Jackson, profiled in “Hidden Figures” (2016), exemplify what writer Margot Lee Shetterly calls “everyday courage,” a kind of imaginative power that filled these women – Black women, white women, invisible women – with a sense of pride and purpose even when deserved recognition went unstated. Director Theodore Melfi’s film is all the buzz, tying at $22 million in box office ticket sales its opening weekend, Jan. 6-8, with “Rogue One: A Star Wars Story,” a nod to the Academy Awards all ready for the women in leading roles.

Set during a time when the United States was in a space race with Russia, the story is about “smart” – let’s rephrase this – “brilliant” Black women – mathematicians and engineers, who took advantage of an opportunity to advance intellectually and economically at a time when the only integrated government branch was the military – thanks to the pressure of Asa Phillip Randolph’s March on Washington Movement (1941-1946) pressure on President Franklin D. Roosevelt to ban discrimination in the defense industries during World War II. Executive Order 8802 opened doors for Black women to work in the space industry as mathematicians, engineers and (human) computers.

When the film opens, all the women are working in the computer pool in the segregated West Area Computers division of Langley Research Center, where the women solve equations while they wait for more permanent assignments. Mrs. Dorothy Vaughn (mathematician) has been at NASA the longest and sort of inherited a supervisory position without the pay.

The other two members of the trio, Katherine Coleman Goble Johnson (physicist, mathematician) and Mary Jackson (engineer), are beautiful, sharp and understand the etiquette of the period as Black women in the segregated South; however, they do not put up with nonsense – at least not for long. They all worked professionally at the National Advisory Committee for Aeronautics (NACA), which later became the National Aeronautics and Space Administration (NASA) in 1958, when the newly minted entity marked a shift from military to civilian peaceful use of research and technologies.

That day, Mary Jackson (Janelle Monáe) goes to work in engineering for a Jewish scientist who encourages her to go back to school for her engineering license, while Katherine Johnson (Taraji P. Henson) goes to work for the lead scientist, Al Harrison (Kevin Costner), director of the Space Task Group. Johnson is assigned the task of checking the math of all the engineers and other mathematicians. Of course the men resist, especially her supervisor, whom she outsmarts.

Johnson creatively overrides the security protocols while simultaneously having to fight racism and prejudice muddied even further by sexism. We see her demand to be a part of the debriefing meetings since the men are discussing her calculations.

She is the only woman in these rooms filled with white men, and she is quite able of holding her own as she demands their respect. It is her calculations which secure the landings of several early missions: 1962 for John Glenn, the first American to orbit the earth and the trajectory of the space flight for the first American in space, Alan Shepard in 1959, and his later Mercury mission in 1961.

Her expertise was charting backup navigational charts for astronauts in case of electronic failures, which we witness on screen. “Hidden Figures” follows closely what writer Margot Lee Shetterly documents in her book, on which the film is based. 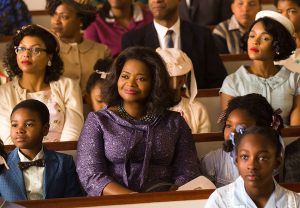 The three actresses together, Taraji P. Henson as Mrs. Johnson, Octavia Spencer as Mrs. Dorothy Vaughn and newcomer Janelle Monaé as Mrs. Mary Jackson, are a creative tsunami. How do the women make it?

Perhaps the shared comradery eases their burdens. The women know how to laugh and have a good time too. The system of white supremacy and racism does not deter their spirit, belief or faith in something greater; rather the opposition inflates it.

They are doers. At a time when buses are being blown up and Black people beaten at lunch counters for demanding civil rights, Mary Jackson sues the state of Virginia to allow her to attend college to get her credits for engineering school.

These are career women who challenge social norms at work and at home, which makes peace tenuous and ever shifting; however, none of them give up. When we meet Mrs. Vaughn, she has been a part of the Colored Computer Pool for 15 years.

All the women are married with children, except Johnson, who is a widow. The mother of three girls, she is being pursued by decorated military veteran Jim Johnson (Mahershala Ali). A little romance spices up an already simmering national brew (smile).

“Hidden Figures” put the human face back on technology. Computers then were people, more trustworthy than IBM mainframes, which might be fast but whose accuracy needed verification. This is what John Glenn (actor Glen Powell) requests when he asks for Mrs. Johnson specifically to run the numbers one more time before takeoff. She does this for several other space missions before shifting completely to digital computers.

This powerful work shows Black girls that not only are Black women scientists capable, they are critical to scientific advancement. If it weren’t for these particular women, early space exploration outcomes might have been quite different.

Author Margot Lee Shetterly says she didn’t think it odd that her dad worked at NASA, her mother was a college professor or that she knew Black women engineers. STEM was her life; it was Hampton, Virginia. “Growing up in Hampton, the face of science was brown like mine.”

Pharrell Williams’s dynamic, pulsing score makes the story, which is serious, entertaining. The creative team uses the artistic legacy of the period as a launching place to write new work. Audiences laugh aloud as they bear witness to whomever will listen – “Hidden Figures“ invites testimony.

This powerful work shows Black girls that not only are Black women scientists capable, they are critical to scientific advancement.

Don’t miss it! Don’t let any Black girl miss it.

I wanted to share with you a GoFundMe campaign started by Paul Revere College Preparatory School educators to take their 4th, 5th, 6th, 7th and 8th graders (approximately 250 students) on a field trip to see “Hidden Figures” at the end of January. The campaign has raised $580 of its $2,200 goal. You can find more information here: https://www.gofundme.com/paulreverehiddenfigures.