Since our historical release from solitary confinement, many of us have been bombarded by the same question: How did you (we) survive decades of being in solitary confinement? This is not a question of simplicity, it is only a quali­tative and quantitative prelude into an analysis rooted in a historical mater­ial construct which would require a compartmentalization of the particulars which are conducive towards providing an accurate response to the above quest­ion with both clarity and purpose.

Not to diminish the suffering that other races and/or classes were subjugated to while in solitary confinement, but it would be a grave injustice for anyone to censor from this state-sponsored atrocity that the New Afrikan Revolutionary Nationalist prisoners were placed and retained in solitary confinement for revolutionary political activities and their strong beliefs in justice for our people, not for criminal drugs or gang activities.

How did you (we) survive decades of being in solitary confinement?

Before there was a Pelikkkan Bay State Prison, hunger strikes or a class action lawsuit, our New Afrikan Revolutionary Nationalist (NARN) Collective was basi­cally alone in this fight against state-sponsored repression, racism and racially motivated violence. No one or group has lost or suffered more than our Revolutionary Collective.

Though we have not been perfect in our service, no single individual, group or organization has sacrificed or been more perse­cuted than our NARN Collective for preserving, protecting and promoting the legacy of Comrade George L. Jackson.

Though we have suffered alone and we have NEVER asked for sympathy nor pity, we pound our chest and spit fire in the spirit of those who came before us. Though we don’t receive the credit nor recognition we rightfully deserve, I, as one proud New Afrikan Revolutionary Nationalist, extend my most profound and unconditional love, trust, respect and support to our NARN Collective from Cali­fornia to New York, to those who have stayed true to our revolutionary creed.

The above statement, though brief, is critical towards understanding our answer to the question: How did we survive decades in solitary confinement?

You have not survived when you return back to the same self-destructive behaviors that were part of your life prior to being placed in solitary confinement; your self-imposed relapse is in­dicative of your defeat! After all one has endured, how can one engage in any activity or behavior that facilitate recidivism or the destabilization of one’s community? This is not surviving solitary confinement!

We define survival based on the restoration of one’s sense of humanity and a dedication towards improving this world for our children and people to live in!

For our NARN Collective, the struggle is far from over. Being in general popu­lation has only magnified the difficulties of our revolutionary task. In 2015, the city of Chicago had approximately 763 homicides and over 4,000 shootings, and at least 95 percent of those victims were New Afrikans.

This is what weighs on the minds and hearts of our NARN Collective. And being able to contribute towards the resolution of this contradiction – i.e., without working with the pigs or government – is indicative towards our survival and the preservation and affirmation of our sense of humanity!

For our NARN Collective, the struggle is far from over. Being in general popu­lation has only magnified the difficulties of our revolutionary task.

I had promised to keep this brief, but at times the fire that burns in the depths of my raging soul pushes forward like an uncontrollable wave of lava, scorching any attempts to restrain the blood that flows from eyes that have seen too much.

But before I put my pen to rest, allow me to extend unconditional love, respect, trust and support to Sista Mary and Brotha Willie Ratcliff, for they have sacrificed more than most of us can even imagine in their support for us. We owe them, and it should be our obligatory duty to mobilize our supp­ort and resources to ensure the continuity and longevity of the Bay View news­paper and protect it from cowardly busters.

I must equally extend my unconditional New Afrikan Revolutionary love, trust, respect and support to Kilaika Shakur, Akili Mwalimu Shakur, Bomani Jihad Shakur, Anajaku Cole, Brotha Kasim, Mabu Shakur, Malik Jamaa Shakur, Rafiki Jemel, my spiritual father Dr. Donald R. Evans, and the GJU Collective – www.GeorgeJacksonUniversity.com, GJU Radio at 347-826-7332 every Wednesday 5-7 p.m., and the Black August Memorial Commemoration Committee (BAMCC) under the leadership of Comrade Akili Mwalimu Shakur for their selfless sacrifices in the service of our peop­le and communities, and special love to my wife, Sharifa Dafina Shakur. And I must not forget to extend a profound love and thanks to our Sistas Marie Levin, Annabelle Parker and Azadeh Zohrabi for their unconditional support.

I will now answer the question: How did I survive 32 years in solitary confinement? I survived with “Blood in My Eye,” while writing prison letters, during “The Art of War,” wrapped around “The Isis Papers” for “Two Thousand Seasons,” resisting the “Destruction of Black Civilization,” while “Breaking the Chains of Psychological Slavery,” with “Negroes With Guns,” being navigated by the “Appeals of David Walker,” while the “Melancholy History of Soledad” revealed the “Agents of Repression.”

But “The Dragon Has Come” with the “Introduction to Afrikan Civilization,” as I find solace and true Black love and beauty with “Assata.” Now you know how I survi­ved 32 years in solitary confinement under both racial and political repression and persecution! War without terms – power to those who don’t fear freedom! Death before dishonor! 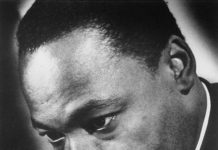