Palestinians confined in Israel’s brutal prisons issued a statement of solidarity on Aug. 20 with the National Prison Strike in the U.S. Members of the Popular Front for the Liberation of Palestine expressed the utmost support for their sisters and brothers jailed in this country’s horrific system of mass incarceration who courageously launched a nationally coordinated protest against their imprisonment and the oppressive conditions they face. The prison protest against “modern-day slavery” began on Aug. 21 and ran through Sept. 9.

For bravely carrying out this act of international solidarity and other acts of defiance, Israeli prison officials retaliated against imprisoned PFLP leaders on Aug. 29. They transferred Ahed Abu Ghoulmeh from Hadarim prison to Ramon prison, moved Wael Jaghoub to Gilboa prison and sent Mohammed Musa Khdeir to Ramon. All PFLP members held in Megiddo prison were put into solitary confinement after protesting the horrendous conditions in the facility and denial of their human and legal rights.

The strike began on the 47th anniversary of the murder of George Jackson, “an event that was recognized in Palestine and around the world as an assassination of a true voice of struggle by the U.S. ruling class.” The prison strike is “a struggle of oppressed and exploited workers” who are “confronting the unmasked brutality of capitalism behind bars” and demanding “an end to the new form of slavery” – corporate exploitation of the incarcerated.

The statement expresses solidarity with Black, Latinx and Arab people who face mass incarceration. The same ruling class that “profits from confiscating Palestinian land and resources and bombing children in Yemen also profits from the forced labor of prisoners.” And it adds: “Your struggle is a workers’ struggle that is part of the global conflict against the vicious exploitation that our peoples face today.”

The Palestinians behind bars extend a “revolutionary salute to the imprisoned strugglers of the Black Liberation movement and other liberation movements, including Mumia Abu-Jamal” and call for the release of freedom fighters, from Leonard Peltier to Mutulu Shakur. They recognize the prisoners’ strike “within the heart of U.S. imperialism, the greatest danger faced by our Palestinian people and the peoples of the world.

For bravely carrying out this act of international solidarity and other acts of defiance, Israeli prison officials retaliated against imprisoned PFLP leaders on Aug. 29.

Workers World newspaper published the entire PFLP statement in its Aug. 30 issue; read “Palestinians extend solidarity to U.S. prison strike” posted at workers.org. The introduction expresses solidarity with the heroic 6,000 Palestinians currently incarcerated by the repressive Israeli regime for the “crime” of fighting for the liberation of their people. There is also extensive coverage of the prison strike and support actions across the U.S. at the website.

Samidoun Palestinian Prisoner Solidarity Network stands in solidarity with the National Prison Strike launching on 21 August in jails across the United States. This important struggle, involving work stoppages, sit-ins, boycotts and even hunger strikes, is a critical confrontation of racism, capitalism and oppression taking place in the center of the U.S. prison system.

The dates of the strike are not accidental; instead, they underline the political legacies that have inspired and continue to push forward the movement. Aug. 21 marks the 47th anniversary of the assassination of imprisoned revolutionary and Black Panther George Jackson. His writings, “Blood in My Eye” and “Soledad Brother,” not only inspired prisoners trapped in the racist U.S. prison system to resist and revolt but were translated around the world.

“You see, that’s the whole story of America. They take their violence and turn it back around on somebody else. I don’t have to talk about American violence, you can look all over the world and see American soldiers everywhere, fighting in other people’s countries and killing them. So if I were running the country, in America, I wouldn’t open my mouth about violence – as many people as they’ve murdered in Vietnam in the past 10 years and they’re gonna talk about violence? As many Black people as get killed every day in this country and nobody knows or cares – and you tell me about violence? How they wiped out a whole nation of Indians and then you say something to me about violence – I don’t wanna hear it!” – Georgia Jackson, following the assassination of her son at San Quentin

Jackson’s own revolutionary perspective was deeply informed by internationalism. As explored in depth by Professor Greg Thomas in his exhibition, “George Jackson in the Sun of Palestine,” writings by Palestinian poet Samih al-Qasim were found in his cell after his assassination. Al-Qasim’s writings about imprisonment, identity and resistance to colonialism and Zionism found resonance and reflection in the writings, thoughts and organizing of an imprisoned Black Liberation struggler.

“You may take the last strip of my land,

Feed my youth to prison cells.

You may plunder my heritage.

You may burn my books, my poems,

Or feed my flesh to the dogs.

You may spread a web of terror

On the roofs of my village.

O enemy of the sun,

I shall not compromise

And to the last pulse in my veins

Prisoners, especially and disproportionately Black people, are forced to work for tiny sums of money. Their imprisonment itself provides profits to prison corporations, while their labor is exploited by some of the nation’s largest corporations for superprofits. This is one reason why the prison strike focuses so clearly on the exploitation of labor and on the power of those workers to withdraw their labor to enforce their demands.

The deeply racist nature of the U.S. prison system and the massive and devastating effects it has had on Black communities in particular reflect the nature of capitalism and settler colonialism in the United States, built on the genocide of Indigenous people.

Prisons do not function separately from capitalism; instead, they work to ensure the perpetuation of capitalism and its imperialist advances against the people of the world. This is a reason why Black Liberation, Indigenous and other movement leaders are targeted specifically for criminalization, accompanying the mass incarceration of entire communities.

The use of incarceration by the United States in order to achieve its objectives to control, suppress and manipulate populations is not confined to its borders. Indeed, the U.S. funds the military imprisonment of Palestinians by the Israeli settler-colonial regime just as it supports the incarceration of resistance leaders and freedom fighters in countries around the world that stand against U.S. imperialism.

The U.S. uses “anti-terror” laws to spread fear among oppressed communities and imprison those who struggle for the rights of their people – or even provide charity to the oppressed, as in the case of the Holy Land Foundation Five, the Palestinians sentenced to up to 65 years in prison for their charitable work.

As an organization that works to support and organize for Palestinian political prisoners, we know the lesson of their dedicated organizing: that no victories can be achieved throughout struggle. Every victory accomplished by the Palestinian prisoners was won through struggle – harsh confrontations on the front line against the colonial enemy. 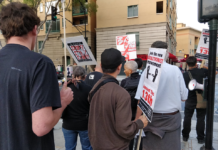 In San Jose, the National Prison Strike is going down!