Chatting with producer and playwright Dennis Rowe, he says that everyone in LA wants to be an actor, but this does not mean that they have talent. Rowe learned that his expertise was in production, not performance, early enough in his career to identify and perfect his knack for writing.

Co-written with veteran actor David Shackelford (“younger Meeks”), the two men tell the story of the 50 Black sailors who survive a terrible explosion that kills 320 fellow sailors, 202 of them Black. Yet, those Black men singled out among the 200 survivors do not survive the indignity of court martial, prison terms and dishonorable discharges.

Initially, the Navy was going to throw out the charges of mutiny as unfounded. The men were afraid, traumatized by what they’d experienced; however, the racially charged trial and prosecution dismisses such consideration.

Thurgood Marshall, legal counsel for the NAACP (later Supreme Court Justice), attended the trial, but as a civilian could not represent the men. He spoke to the press, however, on behalf of the men and published his findings.

The booklet, which begins with a question, “Remember Port Chicago?” was circulated throughout the nation ending up with Mrs. Roosevelt, who encouraged her husband to desegregate the Navy. This act did not remove the stigma from the men’s lives, then or now.

All of the men except one, Mr. Meeks, was pardoned. However, a pardon does not completely clear one’s name.

Rowe’s play does not rely on previous documented sources. He interviews two heirs, Darryl Meeks and Olympian Eddie Hart, who encouraged Rowe to take the play to his hometown, Pittsburg, which he did just a week ago to the delight of the entire community.

Rowe also interviews Mrs. Betty Reid Soskin (born 1921), whom he meets at the Northern California performance. Rowe says she was delighted by actress Anika McFall’s portrayal of her and happy the director included her in his story. At 95, Mrs. Reid Soskin is the oldest living park ranger in the world. She and her husband would have the men over on Sundays for games and drinks.

Darryl’s dad, Mr. Freddie Meeks, narrates the story. Darryl shares with the writers that he was unaware of the story until he overheard his dad in an interview with Robert Allen, retired UC Berkeley historian, whose well-researched book, “The Port Chicago Mutiny” (1989), captures this undocumented history. Perhaps the definitive work on the topic, Allen allows the men to tell their story as he fills in geographic and historic details. It is so wonderful that these men get to have their say.

It is the same with Eddie Hart. He learned the history as an adult too.

Disappeared into the collective unconscious, silenced by structural racism and unaddressed bigotry because their lives did not matter, Allen’s book, Will Robinson and Ken Swartz’s Emmy award-winning documentary “Port Chicago Mutiny: ‌A National Tragedy” (1990), Bay Area ethnomusicologist Marcus Shelby’s 14-part suite dedicated to the lives of these courageous men, “Port Chicago” (2006), and now Rowe’s “Port Chicago 50” challenge a nation that continues to uphold certain “truths” for some, not all, people.

“What they did was take a stand. They didn’t have a movement, but they [were resolute in their position: no more loading live ammunition]. They were up against a lot.”

The show, which originated in Los Angeles, was to be a tribute. There were no plans for it to continue after the initial run. However, the producers got such an overwhelming response, the team decided to keep it up for educational reasons: five weekends in LA, then to Hollywood for another weekend, then to Santa Monica.

Rowe shares the story of a “young man from Pittsburg who came to the show by accident. He’d seen the Port Chicago exit (Highway 4) from the freeway when he lived in Northern California. He remembered it as an exit off the freeway, never imagining the historic backdrop.

“Port Chicago was critical to the desegregation of the Navy. The patron told Rowe, ‘You have to take the show to my hometown in Pittsburg,’ and so the show ended up at the California Theatre through his efforts.” 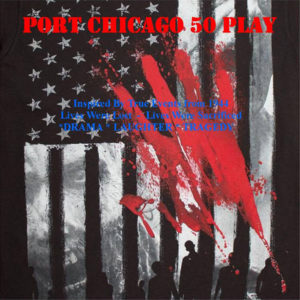 The playbill has the American flag with stripes perpendicular so that they look like bars, the stars a window, a red hand dipped in blood covering much of the image, faces behind the stripes, or bars, staring with dismay and fear and disbelief.

The explosion was so horrific all that was left of the men who died instantly were body parts. Hundreds of men were never identified. Women showed up at the base with photographs to try to identify the remains, but for most, it was impossible.

Port Chicago certainly foreshadows Sept. 11. While in Pittsburg, Rowe and the cast went on the Port Chicago Memorial Tour at the still active base. Just minutes from Port Chicago, the performances that weekend held profound depth for both cast and audience as Friends of Port Chicago National Memorial are still seeking exoneration for the 50 men.

DR Productions is to be commended for telling stories about our people, and the Black Rep for its commitment to being the Culture Warriors whom Mrs. Nora Vaughn dedicated her life to and its preservation and presentation. The play is for mature audiences due to “strong language.”