We continue our celebration of the fairer sex this month as well with Amara Tabor-Smith and Ellen Sebastian Chang’s House/Full of Black Women Project: Episode: Black Women Dreaming, a Ritual Rest, March 26-April 7. In this 10th episode of House/Full, perhaps its largest and longest episode, Black women are invited to sleep, stop during the middle of the day or evening and rest, dream.

Black women rest least of all people across race, gender and class. The question Amara poses is what would the world look like if Black women were rested? The participants will be resting at an undisclosed place in Oakland March 26-April 1. There will be dream doulas to comfort women who awaken from scary dreams, bring midnight snacks to others, give women hugs, listen and talk … make the experience what it needs to be for each Black woman. Electronics will be turned off and distractions minimized, if not eliminated. Ellen told me that she did research on foods that promote sleep like apricots and almonds, turkey and tart cherry juice.

I signed up for two afternoon rests, since the overnights were booked. The afternoon I dropped by I saw smiling Black women – they were glowing. One I recognized from the opening ceremony Sunday, March 25, the others just looked like they were a part of House/Full. They told me I was in the right place, pointed out the door where I stepped across the threshold, let everything fall to the floor – worries, plans, expectations. As I entered, I took off my shoes, turned off my phone, took a breath and relaxed. This was sanctuary and I was home.

The bed I slept in was comfy, felt like I was floating on clouds. Ellen woke me with polenta and sautéed kale with red onions and lavender chamomile tea, which I ate with relish in bed before picking up the journal and sharing my dreams and thoughts. It was two short hours, but it has sustained me through the rest of what has been a very long week. I now have a clearer picture of how our ancestor, Gen. Harriett Tubman, the conductor on the Underground Railroad and spirit guide could sustain herself with such little shut-eye when she was transporting Africans to freedom.

Of special concern are the children, the Black girls who are being sexually trafficked, and Regina Evans, proprietor of Regina’s Door, is also an active abolitionist and partner in the project. Her boutique at 352 17th St., Oakland, is a social enterprise vintage boutique which serves as a safe healing space for human trafficking survivors, homeless youth, at-risk youth and Oakland young artists and creatives.

When Black women dream and rest and sleep deeply, the world benefits. So check out the two exhibit and performance spaces where everyone is invited to sit for a while, relax and dream: Regina’s Door Day Dreaming Exhibit, hours are Wednesday-Sunday, 12-5 p.m., 352 17th St., and Chapter 510 and The Department of Make Believe Dreaming Lounge and Night Room, 2301 Telegraph Ave., hours 1-6 p.m., both in Oakland.

Black Girls Dreaming: Spring Break Writing Camp (ages 8-12) is April 3-6, 9:30 a.m. to 12 noon, at Chapter 510 and The Department of Make Believe: 2301 Telegraph Ave., Oakland. The writing will be published in a limited edition, hand-made book released and shared on April 7 at Chapter 510.

Public events are March 31, Chapter 510 at 7-9 p.m., Decolonize Your Dreams: Songs and Talk, 7-9 p.m. at Chapter 510 and the Department of Make Believe; First Friday, April 7, Closing Event, Chapter 510 and Regina’s Door, 5-10 p.m.; The Oracle Speaks: Dreams from the Dreamers: Performance Ritual of dreams from the rested members of House/Full of Blackwomen; reading from Blackgirls Dreaming Journals. For more information, visit Http://Housefullofblackwomen.Com/Bwdream Or Email Housefullbw@Gmail.Com.

Saturday morning, I was on the road for a Black History Tour sponsored by Toyota with historian John William Templeton, who was my introduction to Black California, beginning with its name, a tribute to Queen Calafia, an Amazon warrior sistah. Though I’d heard lectures by Templeton, I’d never attended a tour – this one a caravan in cars.

It was pretty cool getting up close and personal with legendary William Alexander Leidesdorff, an explorer and entrepreneur who established the first public school in San Francisco; Mary Ellen Pleasant, first Black millionaire, Langston Hughes’s home when he lived in San Francisco for a year; and Sargent Johnson’s murals at the Maritime Museum, where he incorporates African motifs. 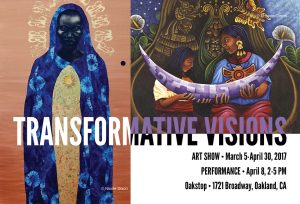 Transformative Visions is a dynamic community arts event with a message of peace, justice and possibility. This year the artist reception is Saturday, April 8, 2-5 p.m., at Oakstop, 1721 Broadway, #201, Oakland. It is a free event. All are welcome.

“Jitney” is landing in the San Francisco Bay Area at a time when Black people are disappearing in large numbers – yes, and it is not always the outmigration, rather homicide and other tragedies contribute to shrinking numbers. The Pittsburgh Hill District of the 1970s is very similar to the Black community here, African American Shakespeare Company’s Artistic Director, L. Peter Callender’s long-simmering and personal vision of what “Jitney” is and what it is saying needs no translation.

When Viola Davis received her first Golden Globe Award for her role in Pulitzer winning playwright August Wilson’s “Fences,” she said that Wilson spoke for the ordinary people. Troy Maxson’s story, portrayed by Denzell Washington, is a story many fathers and sons live. The acknowledgement of the hardworking Black men and the women who support them and what sacrifices these women make is embodied in the character “Rose,” whom Davis portrays. It is the same with Rena and Darnell (YoungBlood), whom she doesn’t trust. The relationship is a complicated one, as is with the jitney or taxicab owner Becker and his son, Clarence, nicknamed Booster.

“Jitney” opens April 1 and runs for eight performances through April 16 at the Marine’s Memorial Theater, 609 Sutter St., San Francisco. Tickets are $32.50 at www.african-americanshakes.org. To listen to an interview with actors Edward Neville Ewell as Youngblood and Jemier Jenkins as Rena, Youngblood’s woman, visit http://tobtr.com/9904889.

‘Hands Up Don’t Shoot: A Requiem in Black’ (review)

On International Women’s Day, Genny Lim, jazz poet laureate for San Francisco, premiered, “Don’t Shoot: A Requiem in Black,” in collaboration with Equipto, hip hop emcee and member of the Frisco 5, Marshall Trammell, percussionist, Hafex Modiradeh, multiple reeds and small percussion, directed by Mary Alice Faye (Footloose). The work honors those killed by police. In fact, as Lim weaves her poetry in and other of the scenes creating the illusion of safety, we fall into a police dashboard cam of Sandra Bland’s arrest; see the cellphone livestream (perhaps for the first time) of Philando Castile’s shooting. The work ends with a Sandra Bland blogpost speaking about the “two Americas.”

Kathy Sloane’s photos of icons of the Black Arts Movement bless the room and make the space holy. Formerly Rafiq Bilal’s Upper Room, we can already touch heaven, yet the ambiance signaled by the art and lighting, and Judith Kajiwara’s, (Oneness Butoh), opening work, “Rite of Egression,” keep us bound by the gravity of both works: spirits trapped in traumatic limbo.

Lim’s work honors the lives of those victims of government sanctioned aggression, named and unnamed, “so that,” she says, “we never forget that justice begins with us [and] to expose and shed light on the growing problem of militarized police in our communities and the tragic cost of human lives when civilians, especially people of color, are perceived as enemy combatants.”

A skyscraper in Oakland?!

In a first for Ragged Wing Ensemble, the 12-year-old physical theater company has announced a world premiere collaboration with the other resident companies of The Flight Deck, a multidisciplinary arts center it founded in the heart of downtown Oakland. With contributions by Ragged Wing, Gritty City Repertory Youth Theatre, Theatre Aluminous, The Lower Bottom Playaz and an original musical score by Oakland-based artist Kev Choice, “Overnight” is a play about the sudden appearance of a high-rise building in what had been a parking lot only the day before. “Overnight” opens in previews on March 31 and runs through April 22, 2017. Opening night is scheduled for Friday, April 7, at 8 p.m. Tickets are $25-$45, and may be purchased online at raggedwing.org/overnight.

Deep Roots Urban Refuge: An Awakening with Araba Awodiran Agboola, Self Love, Spiritual Love, Romantic Love through the Eyes of the Odu, Saturday, April 8, 6-8 p.m., at 527 East 10th Street at Fifth Avenue in Oakland. Ubuntu Theatre Company presents “To the Bone” by Lisa Ramirez, the second offering in Ubuntu’s 2017 season: “Cry Mercy,” “Forsaken Grace,” a series of plays that examine the overwhelming cry for mercy across the globe and the polarization that forsakes the grace necessary for us to hear the cries of others. Previews begin March 31, the play opens April 1 and runs until April 23 at the new residency space, Ubuntu Theater/Brooklyn Preserve, 1433 12th Ave., Oakland. For tickets ($15-$45 online; pay-what-you-can at the door) and information, the public can call 510-646-1126 or visit www.ubuntutheaterproject.com.

Oakland International Film Festival, Celebrating the 40th Anniversary of Roots April 4-8. Roger Guenveur Smith, playwright and actor, gives voice to Rodney Glen King, a man beaten brutally March 3, 1992. Smith’s play was performed at Laney College in collaboration with Campo Santo, on the 25th anniversary of the brutal beating, to an audience who knew the highlights but not the details. The work, which uses King’s memoir, “The Riot Within: My Journey from Rebellion to Redemption,” court documents and medical records, reconstructs that evening when King and his friends encountered boogie men in official uniforms.

“Rodney King: A Netflix Original,” directed by Spike Lee, airs April 28, Rodney King’s birthday month. April 2 he would have been 52. Smith says in an interview the weekend he was in Oakland for the performance of the play that the speech King delivers so that people would stop killing in his name is monumental. The work (live and on screen) unpacks the ridicule King experiences post-verdict, which does not help him heal from the trauma of the beating. African Film Festival at BAMPFA April 2-28.