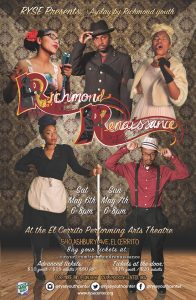 Richmond – RYSE debuts its third annual production at El Cerrito High School Performing Arts Theater on May 6 and 7. “Richmond Renaissance” is an original play written and performed by Richmond youth.

Set in AnnaBelle’s, a Black-owned juke joint in 1940s North Richmond, Richmond Renaissance counters the often negative Richmond narrative of poverty and violence by highlighting the community’s wealthy cultural past as an epicenter for blues, jazz and zydeco. “It’s important that we understand the history of our people and what happened in our city,” lead playwright DeAndre Evans said. “So many people are hurt, confused and feel like they are nothing.”

“Richmond Renaissance” emerges at a time when gentrification not only displaces Bay Area residents, but threatens to erase the history of communities.

To prepare the script, Evans researched Richmond history and interviewed elders in local senior centers. Writing the play helped him learn more about his own family, culture and identity as an artist coming out of Richmond.

“I am hoping this play can teach community members about themselves and instill a sense of ‘pride and purpose.’ My dream is to spark an artistic and cultural renaissance in Richmond,” Evans said. The play’s cast features all Richmond youth. This is a youth-led ode to what once was and what could still be of a city whose single story has become one of perpetual violence.

The play is directed by Safiya Fredericks, a Richmond native, most known for her work in Independent Lens, “Mafia III” (2016), and “America Is Still the Place” (2015). Donté Clark, Richmond’s poet laureate and creative coordinator at RYSE, is the play’s assistant director. Clark’s recent work includes “Romeo is Bleeding” and the web series “The North Pole.” Evans participated as a cast member in three other productions.