Foreword by Jeff Adachi to the newly released book, “Pressure,” by Malik Wade

“There is no better than adversity. Every defeat, every heartbreak, every loss contains its own seed, its own lesson on how to improve your performance the next time.” – Malcolm X

You may think you know this story. A man lives the high life of a drug dealer, becomes a fugitive, goes to prison for a long time and eventually redeems himself. But you would be wrong. Malik Wade’s story is much, much more.

While “Pressure” is a story about a man existing in Dante’s Inferno who transformed himself into an educated and enlightened person, it will also take you on Malik’s sometimes painful but never boring journey that has led him to who he is today: the educator, thought-provoker and change-maker who is challenging us as a society and people to think differently and radically. And at a time when our planet needs leaders like him most.

You probably have read the statistics: One out of three Black men will have a criminal conviction in his lifetime. There are more Black men in prison in the United States than the total collective prison populations of 10 large countries, including India, Japan, Canada, Germany and England. Five times as many Whites are using drugs as Blacks, yet Blacks are sent to prison for drugs at 10 times the rate of Whites.

Even in Malik’s progressive hometown of San Francisco, 56 percent of the people arrested are Black, while our Black population is less than 5 percent. And with 70 percent of those released from prison and jail returning to cages within a year, we know the system is failing us. But the statistics don’t tell the complete story of what is really happening and why. That’s where Malik comes in. 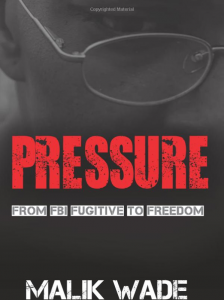 “Pressure” is also a story about survival, winning and losing, heartbreak, hopelessness and how the light at the end of the tunnel finally appears for those whose faith is tested. This story benefits from the pace and feel of an action-packed Hollywood movie, but it contains important lessons for executives, politicians, organizers and anyone in a position of leadership.

Although it can serve as a primer for those seeking a better understanding of social justice, Malik’s story is written in a way that speaks directly to inner city youth and others victimized by poverty, over-criminalization and inadequate education. They, too, need to read this book and apply its lessons.

“Pressure” is also a story about survival, winning and losing, heartbreak, hopelessness and how the light at the end of the tunnel finally appears for those whose faith is tested.

Malik’s metamorphosis from street-tough thug to accomplished leader belies the fact that he never wavered from his authentic self. He simply chose to apply himself differently. Like Malcolm X, he began reading voraciously in prison and, like Mandela or Gandhi, he used his enlightenment for good. He did so by re-examining his core beliefs and redefining his priorities and goals in life.

Instead of selling a brick of cocaine, he learned how to mine the ideas that would give rise to a successful education. Instead of running from the law, he found his footing in teaching others to avoid trouble and enjoy the stability and security of a life well lived. Instead of disappearing into his success, he is using it to help others who would benefit from his life experience, mistakes and triumphs.

Malik’s metamorphosis from street-tough thug to accomplished leader belies the fact that he never wavered from his authentic self. He simply chose to apply himself differently.

Malik’s story gives us a glimpse into the potential our society could unlock if it freed the countless souls it has incarcerated, forgotten and written off. Imagine the talent we have already lost by locking away an entire generation of Black and Brown men, women and children.

The damage wrought by decades of mass incarceration has only recently begun to recede. During his eight years in office, President Barack Obama commuted 1,927 sentences, more than any president since President Harry S. Truman. In his final week, he granted 273 clemency petitions, including many who sought to reduce their sentences under an initiative to shorten prison terms for nonviolent federal inmates convicted of drug crimes.

But there are still 2.3 million people in prisons and jails, most for drug-related crimes. Nearly half of them are Black. How many of them were equally deserving of clemency or at least a reduction in their sentences?

As the elected public defender for the City of San Francisco and a criminal defense attorney for over 30 years, I have witnessed firsthand the cruelty, pain and suffering of a criminal injustice system that is out of control. Life sentences for minors, a three-strikes law that still puts people away for several lifetimes for nonviolent crimes and a bail system that keeps the poor behind bars while the rich buy their freedom.

My office, fortunately, is funded at an appropriate level and we are able to provide clients with the best legal representation money can’t buy. We have the social workers, paralegal investigators, educational advocates and support staff to help people turn their lives around.

We even employ six community organizers who work with youth and families in those neighborhoods most affected by poverty and lack of opportunity. But many public defenders offices around the country lack the resources so freely given to law enforcement and, as a result, are unable to provide the type of legal representation our Constitution requires.

Malik’s story warns that if we do not invest in our children on the front end, we will surely pay a terrible price at the back end. As Frederick Douglass wrote, “It is easier to build strong children than to repair broken men (and women).”

One cannot ignore the fact that our country’s movement toward criminal justice reform has taken a big step backward given the current administration’s stance on bail reform, mass incarceration and monitoring of police departments by the federal government. But it is being met with fierce resistance.

Black Lives Matter and the movement for reforming our police and court system are stronger than ever. People have been shaken from their complacency and given a pressing reason to fight for fairness, equality and diversity.

To begin to heal the damage of racism and mass incarceration, we must understand the severity of the wounds. Tucked deep into Malik Wade’s story you will find the seeds from which new life and hope can spring.

Malik’s story warns that if we do not invest in our children on the front end, we will surely pay a terrible price at the back end.

His salvation is our salvation. His triumph against all odds is a testament to what is possible if we help, rather than hinder, the former incarcerated in our communities.