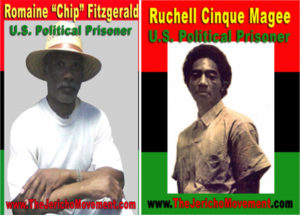 WHEREAS, Romaine “Chip” Fitzgerald and Ruchell “Cinque” Magee have been incarcerated for their political views and actions in support of the Black Liberation Movement;

WHEREAS, even while in prison, Romaine “Chip” Fitzgerald and Ruchell “Cinque” Magee continue to adhere to their principles;

WHEREAS, the term “political prisoner” is accepted throughout the international community;

WHEREAS, many of the political prisoners who have been imprisoned for decades were victims of an infamous and illegal counter-intelligence program of the U.S. government, coordinated by the Federal Bureau of Investigation, called COINTELPRO;

WHEREAS, a congressional subcommittee, popularly known as the Church Committee, investigated COINTELPRO and concluded that “many of the techniques used would be intolerable in a democratic society even if all the targets had been involved in violent activity …”;

WHEREAS, one of the prime targets of COINTELPRO was the Black Panther Party;

WHEREAS, Romaine “Chip” Fitzgerald joined the Southern California Chapter of the Black Panther Party in early 1969 as a teenager, and in September of that year, as a dedicated member of the Party, Chip was arrested in connection with a police shoot-out and tried for assault on police and related charges, including the murder of a security guard, and sentenced to death, but fortunately the death penalty was rescinded by the Supreme Court in 1972, so his death sentence was changed to a life sentence;

WHEREAS, Ruchell “Cinque” Magee has been in prison since 1963;

WHEREAS, Ruchell “Cinque” Magee was politicized in prison and participated in the Aug. 7, 1970, Marin County Courthouse Rebellion – the attempted liberation of political prisoner George Jackson and the Soledad Brothers by George Jackson’s younger brother, Jonathan Jackson;

WHEREAS, Ruchell “Cinque” Magee was seriously injured in the incident and subsequently pled guilty to aggravated kidnapping, and was sentenced in 1975 to life in prison, and has been denied parole numerous times;

WHEREAS, Ruchell “Cinque” Magee’s co-defendant, Professor Angela Y. Davis, was arrested and charged with having provided Jonathan Jackson with the legally purchased guns used on Aug. 7, 1970, and was later acquitted of all charges in a separate trial;

WHEREAS, Ruchell “Cinque” Magee, after 53 years, should be free;

WHEREAS, California State Gov. Edmund Gerald “Jerry” Brown Jr. is authorized to grant a commutation of sentence to people currently serving a sentence for a conviction by the California courts;

WHEREAS, many U.S. held political prisoners, such as Romaine “Chip” Fitzgerald, have increasingly serious medical issues which are not being treated and will die in prison unless they are released;

THEREFORE, be it hereby resolved that the National Lawyers Guild at its convention in New York City in 2016 calls upon California State Gov. Edmund Gerald “Jerry” Brown Jr. to commute the sentences of Romaine “Chip” Fitzgerald and Ruchell “Cinque” Magee and immediately grant their release.

THEREFORE, let it be further resolved, that the National Lawyers Guild reaffirms its support for Romaine “Chip” Fitzgerald and Ruchell “Cinque” Magee.

IMPLEMENTATION: This resolution is to be implemented by the NLG Political Prisoner Support Committee, in coordination with the NLG National Office, and the anticipated support of other committees and chapters to educate their members and the public about this issue.

And send our brothers some love and light: