Supporters of the British Labour Party and its leader Jeremy Corbyn marched through London streets on Saturday, from the BBC headquarters to the Parliament Building at Westminster. KPFA’s Ann Garrison filed this report.

KPFA/Ann Garrison: The London-based Independent reports that tens of thousands joined the “Not One More Day” march against the Conservative Tory government and its austerity policies. They carried signs that read “Tories Out,” “No to Islamophobia, No to War,” “Cut War Not Welfare” and “Austerity is the New Terror.”

Jeremy Corbyn addressed the crowd upon their arrival outside Parliament.

Jeremy Corbyn: What this election campaign, this anti-austerity movement, this current mood in British politics has done is unleashed the ideas and the imagination, unleashed that day-to-day conversation on every street corner, every café and every pub of how differently this country could be run. The Tories are in retreat.

Austerity is in retreat. The economic arguments of austerity are in retreat. It’s those of social justice, of unity, of people coming together to oppose racism and all those that would divide us that are the ones that are moving forward. 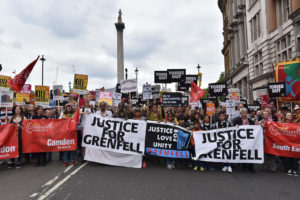 KPFA: Some marchers held signs that said “Austerity Kills, Justice for Grenfell” and a large contingent marched behind a banner reading “Justice for Grenfell,” meaning justice for the victims of the horrific Grenfell Tower public housing fire that killed mostly Black and Brown people, including refugees from the war ravaged Middle East.

The fire occurred because of cost cutting on the cosmetic cladding, which was not fire retardant, applied to the outside of the building. The government has asked residents of other public housing towers with the same cladding to move out until the danger can be mitigated. Jeremy Corbyn spoke to the Grenfell at the rally:

Jeremy Corbyn: And so, in the public inquiry that’s now going to be called, I’ve written to the prime minister yesterday to say we want it quick and urgent in the case of Grenfell Tower, and we want a longer, much longer, more detailed inquiry into housing conditions and stock all over the country. So surely if ever there was a wake-up call for what happens in modern Britain, it’s got to be that disaster at Grenfell Tower and the loss of life that went with it.

KPFA: Some believe that Conservative Party leader Theresa May’s minority government could fall before the end of the year, despite her deal with the Democratic Unionist Party whose main issue is keeping Northern Ireland within the U.K. and thereby preventing the reunification of Ireland. Whether a new election is held this year or later, Jeremy Corbyn promised to throw himself into the next campaign.

Corbyn: So we’ve identified 73 constituencies in England, Wales and Scotland that we can win, and you know what? I’m going to go to every single one of them. We’re going to take the campaign to the Tories because we are utterly determined that the message will get out there, the message of hope.

KPFA: And that was Labour Party leader Jerremy Corbyn speaking at a pro-Labour, anti-Tory, anti-austerity march in London today.