In 1998, after the Navy decommissioned Treasure Island, the City moved unhoused San Franciscans to this artificial landform. In that year, a civil grand jury report announced TIDA’s intention to place tenants on the island to use their rents for maintenance and “an income stream.”

“Three hundred housing units on TI are expected to be occupied in October or November of 1998 under an interim housing plan. TIDA has contracted with The John Stewart Co. to rehabilitate and manage these units … This interim plan is intended to preserve the housing stock, which deteriorates rapidly with lack of use, and to provide an income stream in the short term.”

Early tenants were made to sign two- or three-year leases and told they would have to move soon to make way for island redevelopment, which no one at the time foresaw would be delayed for 18 years.

Ultimately, the City could not avoid the obvious. Tenants at risk for homelessness who were later brought onto the island would be unable to leave, trapped by poverty and San Francisco’s out-of-control rents.

After a 2015 lawsuit by Yerba Buena islanders citing alleged unfair evictions, in which they were offered insufficient payout inducements to move from the smaller, natural island, the TIDA consortium appears to be attempting to block potential litigation from roughly 2,000 Treasure Islanders, a large number of whom are impoverished mothers and children on subsidies, who for 18 years have been exposed to radiation, chemicals, asbestos, mold and lead surrounding them in their environment, packed into the walls of their homes and carried in their tap water through leaking, cracked pipes.

The consortium stands to rake in billions from hotels, condos and businesses they plan to build on Treasure Island. They don’t want more pesky litigation standing in their way.

A Saturday, Sept. 23, 2017, San Francisco Examiner article headlined “Consultant hired to help move Treasure Island residents” announced: “The Board of Supervisors approved a $1.25 million, five-year contract with Associated Right of Way Services, Inc., on Tuesday. The firm is intended to outreach to residents and help them navigate the decision between relocating to a new unit or taking an in-lieu payment, depending on their eligibility.”

The article continues, “The Treasure Island Development Authority (TIDA), which oversees the redevelopment, requested the contract in anticipation of ‘the potential complexity and intensity of these various communications with numerous different households,’ according to the Budget Analyst report.”

Like a high frequency dog whistle undetectable by the human ear, this statement seems to employ a deceptive communication strategy in which its coded language appears innocuous to unsuspecting San Franciscans, while a select group of “in the know” TIDA consortium members and their attorneys easily detect an embedded message intended only for them.

One savvy Examiner reader “heard” the whistle. “Sounds like bureaucrat-speak. ‘We’re getting ready to screw poor people, largely of color, and we anticipate resistance,’” he said.

Some tenants believe TIDA is highly motivated to incentivize tenants to take a quick payout and leave the island without resistance. Others see the terms and conditions as word-play intended to confuse them with a cluster of complicated qualifications, making it difficult for both subsidized and market rate renters to grasp the variety of options.

Indeed, with the current 27 percent affordable housing allowance providing an insufficient number of units for deserving impoverished tenants living on Treasure Island, John Stewart has stepped up its campaign of “no cause” evictions.

Sources declining to be identified disclosed that TIDA held a September community meeting last week introducing this outside consulting firm and the payout plan.

Tenants observe that the in-lieu payments are too low to rent anywhere in the Bay Area, especially San Francisco.

The article states that for the eligible Treasure Island tenant, “The current in-lieu payment is $6,286 per adult tenant,” with “an additional $4,191 for each elderly, disabled or minor tenant.”

The total payout of $10,477 for a mother and one child would provide three months of rent at $3,492 a month. This sum would cover neither moving expenses nor damage deposit.

TIDA first offered a similar payout deal to Treasure Island residents in 2011 in the form of a survey questionnaire.

A representative visited one tenant’s home and, sitting in the kitchen cooking, handed her a form on which she was to indicate whether she wanted to stay on the island or take a one-time payout and move elsewhere. The paper constituted an official offer. Eager to get off the island quickly because she and her children had developed illnesses that she believed were caused by exposure to toxins, she signed on the spot, choosing the lump sum option.

Back at that time, community meetings were also held on this issue. Attendees were handed survey questionnaires to take home and sign. Canvassers would visit their residences later to collect the papers.

The tenant never received the lump sum. Later, she contacted John Stewart requesting relocation money. The staff denied the survey had ever been conducted, saying, “There are no papers here.” They were adamant that relocation assistance was unavailable. Since this tenant’s signature legalized the document, she is concerned about its present whereabouts.

Tenants note with interest that TIDA is doing things differently this time. Five years later, the payouts are bigger, and a consultant has been hired. Instead of passing out questionnaires requesting community input, residents are flatly informed of their options.

Sources believe that these larger financial inducements may be accompanied by a rider guaranteeing in writing that a tenant who accepts the payout will promise not to protest or file suit.

In both the eviction and payout crosshairs as well are Treasure Island tenants who have fallen ill after exposure to island toxins.

Since the island was decommissioned, the City has been well aware the Navy had thoroughly polluted the soil and water with radiation and chemicals. In 2013, investigative reporter Matt Smith wrote an article entitled, “Treasure Island cleanup exposes Navy’s mishandling of its nuclear past,” verifying that “46 years before the base was selected for closure, Treasure Island was home to nuclear war academies that used a variety of radionuclides in their training – including radium, plutonium and cesium 137 – an in-depth review of military and government documents shows.”

“For years, the base served its purpose until, in 1993, it landed on a decommission list. The military decamped, dismantling and cleanup began,” Smith wrote.

In 1997, these vulnerable poor people were, at best, marginally aware of the Navy cleanup.

The Examiner article’s casual mention of the Navy’s radiation-226 remediation moves attention away from the fact that for the last 18 years tenants’ homes have sat within feet of Navy cleanup zones which contained, in addition to radium-226, powerful DNA-altering radioisotopes – mostly cesium 137 – but also plutonium, tritium, cadmium, cobalt, strontium and krypton.

During 20 years on Treasure Island, families have been exposed to every chemical on the list below, saturating the soil and groundwater and blowing about in the island’s high winds.

In 2014, I videoed four pre-teens bouncing happily on a trampoline next to the Halyburton-Bigelow Court fence inside of which the Navy continues to clean powerful chemicals called polychlorinated biphenyls (PCBs) that cause liver and skin cancer. As of summer 2017, radiation warning signs continue to dot this fence.

For two years, Navy teams have been remediating a large underground total petroleum hydrocarbon (TPH) and arsenic bubble, or “plume,” from the soil beneath a grassy area at the intersection of Old Westside Drive and Gateview Avenue, which is lined with tidy townhouses. Total petroleum hydrocarbons cause nausea, tissue swelling and suffocation. The heavy metal arsenic, a breakdown product of old petroleum, is an ingredient of rat poison and can kill humans quickly.

Lead deposits are legion across the island. As we have seen in Flint, Michigan, lead produces childhood mental retardation, destroying brain cells and damaging the nervous system,

This summer, three sets of parents and their children, including several newborns, were moved from their home of a decade at 1126 Reeves Court to enable the Navy to demolish the building to check the soil underneath for radiation and chemical contamination. In 2018, after the Navy finishes the testing, perhaps then they can identify the powerful toxins to which these families have for years been exposed, producing painful foot-swelling in one mother and hair loss in her daughter.

Finally, for 18 years, island parents and children have inhaled polluted air in homes where the walls are packed with asbestos insulation and clumps of toxic mold, suspect in the development of cancers, tumors and the respiratory illnesses so common across the island.

The Navy’s casual mention reported at the end of the Examiner article of a chemical subgroup of volatile organic compounds (VOCs), which include dry-cleaning solvents PCE, TCE, DCE and vinyl chloride (VC), seems intended to deflect attention from the far more powerful accumulation of contaminants – radiation, chemical, asbestos, lead and mold – that have been present for years, continuing to poison Treasure Island’s soil, groundwater, air and buildings.

In fact, to date the Navy has failed to thoroughly clean the VOCs in and around Building 99. At the August 2017 Restoration Advisory Board (RAB) meeting, the project manager’s report identified toxic vinyl chloride still present in the soil and groundwater immediately abutting planned redevelopment structures to the east. Treasure island residents and Job Corps students who exit the bus at Fifth Street near Building 99 and have strolled through this area for many years have been exposed to chemicals which attack the human immune system and cause cancer.

Site 24, part of the large northwest portion of the island, designated “Wetlands and Wildlands,” “is planned for redevelopment as open space,” because it is too toxic an area on which to construct buildings.

Paid to live on Treasure Island

We feel that the TIDA consortium’s plan to drive out sick and dying Treasure Island tenants with no place to go now that their usefulness is over reeks of profound injustice and a massive human rights abuse.

Indeed, since these families never were – and still aren’t – warned of the toxins before being enticed by low rents or, summarily without choice, moved to Treasure Island, the San Francisco Bay View newspaper has called for all their rent money, exacted by fraud, to be repaid. Because radiation and chemicals have sickened these families and permanently changed their children’s DNA for generations to come, all past and future medical expenses need to be covered as well.

Finally, these at-risk families should be moved to safe and affordable housing equal to, or better than, their Treasure Island homes. The TIDA consortium has never responded to these repeated requests. 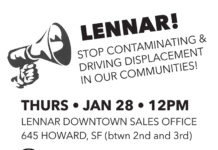 Lennar, the corporation that ate San Francisco, gobbled up Hunters Point and is devouring Treasure Island