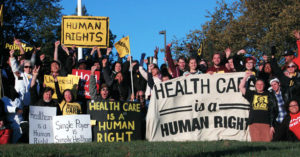 Healthcare is a human right! I’ve heard that phrase many times in my 20 years advocating for universal healthcare. Until now, few legislators in Sacramento have spoken those words.

On Oct. 23 and 24, however, California Assembly members Jim Wood and Joaquin Arambula, co-chairs of the Assembly’s Select Committee on Healthcare, said, “Healthcare is a human right.” The other Democratic members of the committee, Autumn Burke, David Chiu and Laura Friedman, all agreed.

Healthcare is a human right! I’ve heard that phrase many times in my 20 years advocating for universal healthcare. Until now, few legislators in Sacramento have spoken those words.

Healthcare is a human right. Unfortunately, the two Republican members of the committee, Tom Lackey and Marie Waldron, did not attend the Tuesday hearing. They may have missed Monday as well. You can find the full agenda as well as links to the reports presented here: http://assembly.ca.gov/healthcaredeliverysystems.

The California Nurses Association distributed a poster before the first committee meeting showing Jim Wood as the No. 1 recipient of healthcare industry campaign contributions, at $552,797. Joaquin Arambula is No. 3 with $290,750.

Do they really believe healthcare is a human right? Will these hearings move us towards better healthcare for everyone in California at a lower cost? I am encouraged by what I heard, but am not ready to answer yes to those questions.

On Monday, the 23rd, the hearing focused on California’s current system of providing healthcare. There were presentations on Medicaid/Medi-Cal, Medicare, the individual market, employer based coverage, safety net programs and current gaps in coverage.

Charts, data and at times mind numbing details illustrated the confusing complexity of healthcare in California and the U.S. Two of the five presenters were from an organization, Insure the Uninsured Project, that receives major funding from insurance companies.

Will these hearings move us towards better healthcare for everyone in California at a lower cost? I am encouraged by what I heard, but am not ready to answer yes to those questions.

The Oct. 24 hearing was much more interesting. The discussion shifted to universal coverage in other countries. Both presenters were from The Commonwealth Fund. “The mission of The Commonwealth Fund is to promote a high-performing health care system that achieves better access, improved quality and greater efficiency, particularly for society’s most vulnerable, including low-income people, the uninsured, minority Americans, young children, and elderly adults.”

One of the most common questions people ask about establishing universal healthcare in America is: How are we going to pay for it? How can we reduce costs, eliminate co-pays and deductibles and provide better healthcare to every resident?

The data is very clear. In other countries, people enjoy better healthcare at a much lower cost. This isn’t news to me, but it was refreshing to hear the presenters document the details of successes in other countries.

For the 11 countries studied, the cost per person for healthcare averaged half of what we pay in the U.S. When rating overall health system performance, the U.S. ranks last, far behind the next lowest country. In 2014, healthcare costs consumed 16.6 percent of Gross Domestic Product (GDP) in the U.S. For the other countries: 9 to 11 percent. People in the U.S. have a shorter life expectancy.

The data is very clear. In other countries, people enjoy better healthcare at a much lower cost.

While the healthcare debate rages in Washington, California could step forward and show it is possible to learn from the successes in other countries. We could pick the best practices from each country and design a healthcare system that would be second to none in the world.

Will we do it – or will campaign contributions to legislators speak louder than the voices of constituents? This hearing provided some hope that our voices will finally be heard.