In March, I wrote about the introduction of Assembly Bill 1400. “A single-payer health system represents the belief that health care is truly a human right. Our current system results in unjust outcomes and these inequities are underscored especially now, exacerbating economic downturns for working families who have lost their income and meaningful access to health care,” said Assemblymember Ash Kalra, co-sponsor of AB 1400 along with the California Nurses Association (CNA).

Throughout March and April, California healthcare activists mobilized. There was new energy and optimism. But a key piece was missing from AB 1400: Financing. On April 22, Assemblymember Kalra released this statement:

“Two months ago, I was proud to introduce AB 1400 to establish a detailed policy for a single-payer system in California called CalCare. In the weeks since, many of my colleagues have raised concerns that the funding mechanism for the bill had not been identified.”

Healthcare industry campaign donations are frequently blamed for legislative inaction. In this list of donations to California politicians, Gov. Newsom is at the top, with more than $2 million received.

Let’s follow the money. If you click the hyperlink in the last sentence, then click on the image of the magnifying glass to the left of Newsom’s name and choose the record option. A long list of donors appears. Their business and service models will be impacted by legislation like CalCare. Health insurance companies, for one, could be put out of business.

Healthcare industry campaign donations are frequently blamed for legislative inaction. In a list of donations to California politicians, Gov. Newsom is at the top, with more than $2 million received.

With legislative inaction in Sacramento, the shortest route to achieving Guaranteed Health Care is by identifying enough supporters to win at the ballot box. Last November, more than 17 million voters cast a ballot in California.

If AB 1400 had been on the ballot – with a financing plan – would 9 million voters support it? Not without a campaign structure to get out the vote.

Mobilizing 9 million people would be difficult if not impossible for one centralized campaign organization. Tens of millions of dollars would be needed for campaign infrastructure. A coalition of organizations throughout California, each agreeing to take a portion of the work, may be a more effective and less expensive way to build such a huge list of supporters.

A church or local union could be asked: “If Guaranteed Health Care for All (Improved Medicare for All) is on the ballot, how many of your members would vote for it?”

The data on each voter doesn’t have to be shared with the entire coalition. Only the number of voters will be listed alongside the name of each coalition member.

Public opinion polls show strong support. Better health care can be won at the ballot box if enough supporters are identified. Will you help create a coalition to win better health care for everyone in California?

Barry Hermanson is a Green Party of California Coordinating Committee member and a former small business owner. Contact him at Barry@Hermansons.com or 415-255-9494. 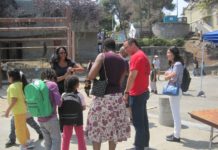