In January of 1963, I was in my senior year at my all-Black high school and required to take a course in U.S. government. Our teacher was a World War II veteran who was also the basketball coach with an easy-going manner. We spent more time discussing current events than dead presidents and supreme court justices.

The most recent civil rights demonstration was usually the topic of discourse. But one day, in the middle of that month, our teacher asked the class if we knew who Malcolm X was. Every hand in the room went up. But when asked to explain who he was, few of us were able to say more than he was a “Black Muslim” and that he had once been in prison.

This demonstration received national attention and 30 years later was portrayed in Spike Lee’s film bearing Malcolm X’s name. But as a 17-year-old high school student at the time, I had not been paying much attention.

A few weeks later, on Feb. 13, Malcolm led a demonstration of 230 Muslims in Times Square, protesting police brutality. America was now paying even more attention to Malcolm X and the Nation of Islam.

The immediate response from white America was that the Nation of Islam was subversive and dangerous, a fringe group led by Elijah Muhammad and Malcolm X that preached a hatred of all white people.

But a year earlier, in 1962, Malcolm had been speaking less about the racially skewed teachings of Elijah Muhammad and had begun getting more involved in seeking civil rights and justice for African Americans. But the damage had been done. The worst of Malcolm X’s words were weaponized against him and he was declared as being beyond redemption.

By the time of his assassination in February 1965, he had been condemned as an anathema to America and its values. This was a view held by conservatives, most liberals and many Blacks.

In January 1999, the United States Postal Service issued a stamp in honor of Malcolm X.

Malcolm could not have changed from the time of his assassination until his being honored by the Postal Service. He was dead. What had changed was America.

It became clear to our nation that the wrongs and injustices against which Malcolm fought were real and his struggle had virtue. Despite his offensive words in his earlier career, Malcolm sought to make America a better place.

Malcolm could not have changed from the time of his assassination until his being honored by the Postal Service. He was dead. What had changed was America.

In recent weeks, news has surfaced that Barack Obama stood for a photograph in 2005 with Minister Louis Farrakhan, the current leader of the Nation of Islam. The overheated reaction by numerous white liberals to this revelation is reminiscent of the reaction to Malcolm X 50 years ago.

This inability of these white liberals to contextualize Malcolm X within the American fabric in 1965 and Louis Farrakhan in 2018 reveals a daunting problem that has handicapped the progress of African Americans for many decades. Too many white liberals want to make Black folk in their own image.

In the mental construct of the world they wish to create, there is a place for Black folk, but not Black folk like Malcolm X or Louis Farrakhan. To some white liberals, the Malcolms and the Farrakhans are wrinkles in the American fabric that must be removed if a future liberal America is to be smooth. But those wrinkles have been created by centuries of racism, both in the U.S. and abroad and they cannot be removed without destroying the fabric itself.

Too many white liberals want to make Black folk in their own image.

Too many white liberals see African Americans as two-dimensional cutouts that can be disbursed throughout a liberal America. Our presence would be devoid of our history of slavery, Jim Crow and modern-day oppression and the social complexities which they have created.

Our presence would also be disconnected from other oppressed people of the world. In a word, our presence would be non-threating to the preferred world order of most white liberals. But that is a white liberal fantasy that cannot exist in a world as complex as ours. It is a flawed national view and a flawed worldview. 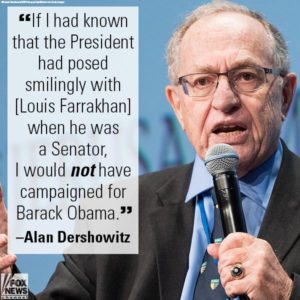 One person who typifies the white liberals holding these flawed views is Alan Dershowitz. Dershowitz, a Harvard law professor emeritus, has championed many liberal causes and shown himself to be deeply concerned with civil rights. Nonetheless, he is reported to have said on Fox News recently that had he known of the Obama-Farrakhan photograph taken in 2005, he would not have supported Obama’s presidential bid in 2008.

Citing offensive remarks attributed to Farrakhan about Judaism and Israel, Dershowitz has denounced him as a subversive, un-American anti-Semite.

The problems with Alan Dershowitz’s position regarding Obama’s taking a picture with Farrakhan are two-fold. First, by associating Obama with Farrakhan’s views, he is painting with too broad a brush.

Many politicians have their pictures taken with individuals with whom they do not agree politically or ideologically. In 2005, Farrakhan, as a resident of Illinois, was one of Obama’s constituents. Farrakhan also was the religious leader of many of Obama’s Illinois constituents.

To categorically state that Obama should not have taken a picture with Farrakhan ignores the complexity of the African American community and takes Obama out of that context by asserting that his main concern should have been the comfort level of white liberals.

In 2014 the White House hosted the U.S.-Africa Summit and several of the African heads of state who attended and had their photographs taken with President Obama and the First Lady are notorious human rights violators. Did these photo-ops prompt the same level of concern from Dershowitz?

By associating Obama with Farrakhan’s views, he is painting with too broad a brush.

Does Dershowitz condemn Obama for having his picture taken with Vladimir Putin?

There is not enough room here to list the many interactions of Obama’s predecessors with controversial figures that drew little attention, but I feel compelled to mention one. In 1915 Woodrow Wilson hosted a screening of D.W. Griffith’s extraordinarily racist film “Birth of a Nation.”

It was one of the first screenings of a film at the White House and members of Wilson’s cabinet were in attendance along with their families. Wilson’s hosting the screening of “Birth of a Nation” barely rates a footnote in American history while Obama’s having his picture taken with Farrakhan has some white liberals like Dershowitz in conniptions.

The disparate responses to these two events point out a war of ideas between Black folk and many white liberals. A war that has simmered in this nation since its birth and continues to this day.

For the most part, this has been an asymmetrical war with wealth and power aligned on one side minimizing racist affronts, and truth and paucity on the other side, struggling to articulate the true condition of Black folk in America. From the slaveholding days through the Jim Crow era, the Civil Rights Movement and now the Black Lives Matter Movement, Black folk have been hobbled by the condemnation of white liberals when a spoken truth gives rise to white discomfort.

The second problem with Alan Dershowitz’s complaint is the static nature of his worldview. Just as Malcolm X was celebrated on a U.S. postage stamp for his struggle for social justice 50 years after he was considered an anathema to America, there may come a time when Louis Farrakhan’s efforts may be seen through the lens of history as a struggle for essential human rights.

Just as Malcolm X was celebrated on a U.S. postage stamp for his struggle for social justice 50 years after he was considered an anathema to America, there may come a time when Louis Farrakhan’s efforts may be seen through the lens of history as a struggle for essential human rights.

Unfortunately, this is not the first time that Dershowitz has attempted to do this. Beginning in August 2016 he has been attacking Black Lives Matter for their showing support of and solidarity with the people of Palestine.

He even went so far as to write in the Boston Globe: “Black Lives Matter should rescind the portions of the platform that falsely accuse Israel of genocide and apartheid. If it does not, it risks ending in the dustbin of history, along with other discredited bigoted groups.”

This pronouncement smacks of hubris. Alan Dershowitz has allied himself with Black folk on many issues. But being an ally on many issues does not give him license to speak as an ally on all issues.

The influence of white liberals who fear all radical Black thinking is what led many Black folks to condemn Malcolm X during his lifetime. The fact that Malcolm was feted 30 years later is proof that those white liberals and the Black folk that followed them were wrong.

We can love our allies, and still have a concern that they do not speak against our interest when our interests diverge from theirs. Alan Dershowitz and others of our allies must come to understand this.

DACA: The latest from the un-Obama