The Eureka chapter of the National Association for the Advancement of Colored People (NAACP) has sent out a press release regarding Humboldt State University’s recruitment efforts in minority-majority neighborhoods –telling HSU to forgo the revenue these prospective students offer until they implement substantial support for students of color.

The Eureka Branch of the NAACP exists to support, protect and amplify the communities of color in Humboldt County. Students of color at Humboldt State University have shared with us their experiences of racism in many forms, including micro-aggressive behavior in HSU classrooms, overt racism on the streets, systemic racism in the pursuit of housing and employment, and institutional racism in the form of more punitive measures than their white counterparts. We hear them.

The Oct. 6, 2001, murder of Corey S. Clark, a Black male HSU student, remains unsolved as does the April 15, 2017, murder of David Josiah Lawson, also a Black male HSU student. Many students feel that the murder of David Josiah Lawson was a racialized murder and the trauma of both his murder and of a lack of justice over one year later has many students afraid to venture far from campus or their homes.

Students of color at Humboldt State University have shared with us their experiences of racism in many forms, including micro-aggressive behavior in HSU classrooms, overt racism on the streets, systemic racism in the pursuit of housing and employment, and institutional racism in the form of more punitive measures than their white counterparts. We hear them.

HSU recruiters continue to travel to minority-majority communities with intent to enroll more students of color. Yet there has been no consistent presence of HSU administrators at the monthly vigils organized and facilitated by the students and Charmaine Lawson, the mother of David Josiah Lawson. There is no regular presence of HSU administrators at the City of Arcata’s Dialogue on Race, which takes place every third Thursday at the D Street Neighborhood Center. This is unacceptable.

The California Supreme Court has ruled that colleges in California have a duty to take reasonable steps to protect their students from “foreseeable violence” on campus and in school-related activities off campus. HSU’s administration has failed to take an active role in addressing racism and safety concerns in the City of Arcata and Humboldt County, thus endangering the lives of the students to whom it extends acceptance letters who have to live, shop and work beyond the boundaries of the campus.

A recommendation of the recent Western Association of Schools and Colleges Senior College and University Commission accreditation team after visiting HSU states, “The admission efforts need to incorporate more information about the challenges as well as the opportunities for students considering HSU (i.e. present the realities of limited housing, safety concerns, racism in the community etc.).”

Students have expressed frustration and disappointment that the recruitment process did not prepare them or their families for the realities of the racial and social climate in our small, rural communities and that there are not sufficient campus resources to support them.

“The admission efforts need to incorporate more information about the challenges as well as the opportunities for students considering HSU (i.e. present the realities of limited housing, safety concerns, racism in the community etc.).”

How can HSU in good conscience ask students of color from predominantly minority-majority locations to attend HSU as things stand? If HSU is “number one for social justice” as advertised, the university must accept responsibility for the negative impacts of its actions and inactions on students of color and immediately implement changes.

To that end, the Eureka NAACP requests of Humboldt State University that:

Alternatively, we request that HSU cease all recruitment until these measures are met in largely minority-majority populations and forgo the social and cultural diversity and revenue these students represent. 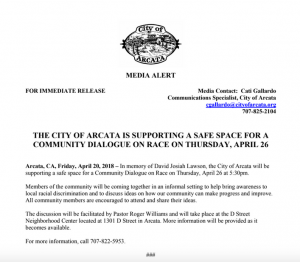 The NAACP press release comes on the day of the resumed “Dialogue on Race” forums hosted by the City of Arcata. They were requested by David Josiah Lawson’s mother.

These forums were abruptly shut down last year after HSU President Lisa Rossbacher was forced to attend and answer frustrated students, mainly students of color, over the lack of progress in Lawson’s case and the lack of safety measures for students who felt afraid.

Only after pressure from the public and Lawson’s mother were these meetings resumed last month.