On Jan. 21, 2018, our loved elder, revolutionary leader and teacher Hon. Richard “Mafundi” Lake joined the Ancestors. Baba Mafundi left us with knowledge, love and an example of how to live a life of truth, integrity, conviction to struggle, love for his beautiful, faithful and devoted wife, Mrs. Carolyn Weyni Njeri Lake and family, and with an understanding that sacrifice is necessary. 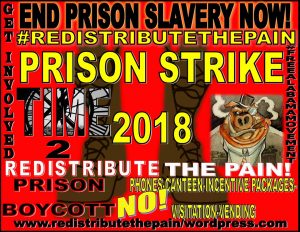 For the many of us who had the privilege of being in the classroom of life with Ancestor Mafundi, let his transition serve as yet another lesson to us of the immediacy of our situation behind these walls and serve as a reminder of why we can’t wait to commit our all to the struggle to end slavery in America. We are, without any doubt, still slaves and chattel here in America for no reason other than the color of our skin.

While others may suffer as collateral consequences due to the class struggle, racism serves as the primary driver behind capitalism’s parasitic greed and the genocidal tendencies being waged against Black people in the U.S. and worldwide.

America has never known any purpose for Black people except domination of our labor. In the document “David Walker’s Appeal,” we learned that American slave owners devised a plan to send all “free” Blacks to the colony Liberia so that they could not mingle with or educate and influence the enslaved Blacks who were to remain in America.

The slave was to remain isolated, totally uneducated, and forever surrounded and contained by a society and system that offered only one option for Black people: forced slavery, with no hint of humanity. The only knowledge we were to have was who we were owned by and what our job was.

America has never known any purpose for Black people except domination of our labor.

Very little about this model has changed under the prison slave system that has been erected under the 13th Amendment to the U.S. Constitution. As slaves, we are separated more and more from society every day.

Some states offer up to five free letters each month to indigent slaves. In Alabama, you receive two free legal letters each week – that’s it. If you can’t afford stamps to write your family and you lack legal representation, you are effectively cut off from communicating with society.

In the solitary confinement units, you get one phone call every 30 days, except in disciplinary seg, where NO phone calls are allowed. We receive one visit every 90 days in administrative segregation and one visit every six months in close or maximum custody.

Very little about this model has changed under the prison slave system that has been erected under the 13th Amendment to the U.S. Constitution. As slaves, we are separated more and more from society every day.

Otherwise, we talk to these walls, toilets or to ourselves. The outside world is something that exists only in our heads. How can a prison system in Alabama or anywhere prepare a person to return to society by cutting us off totally from society?

The mind-altering effects of such oppressive conditions cannot be denied. In the groundbreaking book “Understanding the Assault on the Black Man, Black Manhood and Black Masculinity” by Wesley Muhammad, Ph.D., Dr. Muhammad cited from a report in the Chicago Tribune about how poverty, neglect or sensory deprivation of the kind we experience in solitary confinement can negatively affect and reset the brain’s chemistry.

Chemical manipulations of the mind and bodies plays a vital role in social control. Nowhere is that more evident than in the prison system.

The food, water and medicine that we are exposed to on a daily basis plays an important role in how we develop behind these walls. Our bodies are constantly polluted with toxic food, processed meats, genetically modified products, contaminated water, cheap or experimental medicines, etc. which adversely affects not only our physical health but also our mental health and disposition.

Chemical manipulations of the mind and bodies plays a vital role in social control. Nowhere is that more evident than in the prison system.

Dr. Muhammad goes on to point out how drugs like K2, ice, marijuana and cocaine were designed and manipulated to produce a desired result. The drugs always seem to come along at the height of struggle and civil disobedience. Alas, in the midst of the current Prisoners’ Human Rights Movement, we see new drugs seeming to originate inside of the prison.

So, understanding and being involved in the movement also entails knowing the seen and unseen strategies and forces that are being employed against the struggle. Drug overdoses and suicides have gotten so bad that they are hardly news any more.

And as the death tolls continue to climb, the sedatives, downers, opioids and Flacka and Suboxone drugs are being endlessly introduced into the prisons to keep our eyelids closer to being closed. Stay woke, people. Please Stay Woke! Our survival is at hand.

As we move further along into 2018, we have to continue to plan, strategize, mobilize and bring all of our forces closer to being One. From the inside, we continue to need more artists, authors, activists and organizers to step forward.

Our sister Queen Tahiyrah and others just launched the #BarzThroughBarz magazine. This is yet another platform that we can use to reach the people. In addition, our brother Kwame Shakur has worked to create several social media platforms, including YouTube Channel Live and a blogtalk radio show to help spread the movement.

And, as I have stated previously, we still have room for even more innovations, because we still have work to do in forming a National Coordinating Committee to establish a national organization that will be all of our factions together, as well as our need to find an app developer so that we can create an app that will make all of our platforms just one click away.

As we move further along into 2018, we have to continue to plan, strategize, mobilize and bring all of our forces closer to being One. From the inside, we continue to need more artists, authors, activists and organizers to step forward.

Also, we need to monetize all of our content and create an e-business so that we can sell our products, leather and crafts, books, poetry, art, cards, calendars and whatever else we create from inside these prisons so that we can finance our own operations within our movement.

One Brother who recently reached out from Missouri, C.I. Ballard, expressed frustration with the “slave mindset” that he continues to encounter: “I ain’t getting involved with that. I’m just trying to go home” or “I’m just trying to do my time” etc.

Well, while we continue to try to reach this “mindset” head-on, we also need to be constantly creating alternative content, music, books etc. to reach these people. This is the work of the National Committee, to help devise plans and tactics that can be used to recruit and help change minds.

Actions like the Campaign to Redistribute the Pain 2018 help to identify candidates who are willing to sacrifice for freedom and are committed to ending slavery and to stop funding the system. These are the people who will help lead, guide and direct the national organization and volunteer to be part of the National Coordinating Committee being proposed by Brother Kwame Shakur of Prison Lives Matter.

Those who refuse to wear the chains will not financially support the very system of slavery that, paradoxically, relies on that same financial support to afford and buy the chains. We can accomplish this only by making those tough decisions that call for separation.

Separation from the system … By doing this, we won’t get caught up in the abyss of organizing just for the sake of creating another organization, while continuing to act in ways that are counterproductive to our livelihood. We have to organize around the problem, only, and create an organization that constitutes the solutions.

Actions like the Campaign to Redistribute the Pain 2018 help to identify candidates who are willing to sacrifice for freedom and are committed to ending slavery and to stop funding the system.

I will close this article with words of encouragement to all of the men, women and young adults who have made a sacrifice behind these walls for your/our freedom, including C.I. Ballard, Kwame Shakur, Manuel “Chase” M., Omar G. (freeourbrothers.com), Kwanetta H. (Texas), Mary Shields (Mississippi) and the many others who have contacted the Free Alabama Movement at our P.O. Box.

We are four months into a one-year bi-monthly (February – April – June – Black August – October – December) boycott campaign against collect phone calls, canteen/snack line/store draw, incentive packages or visitation vending machines. Our objective is to defund prison systems by disrupting departmental operating budgets by removing these funds from government budgets and redirecting these funds towards building a national organization whose agenda and purpose will be to end mass incarceration and prison slavery.

These redirected funds will help generate and disseminate educational material and books on mass incarceration, prison slavery and the 13th Amendment; help incarcerated freedom fighters publish books, articles, poems, arts and crafts, and other material needed to fund our movement; help to develop an e-business platform to centralize funding; and, among other things, help finance development of our own app so that we can consolidate and organize all of our movement information into one click of a button. We can never be an independence movement if we don’t establish an independent structure.

Our family at Bay View has put out a call notifying us that it costs $7,000 in printing costs each month to produce our Holy Scripture. This is a cost that we should be covering from behind these walls with ease.

The fact that we are connecting through this newspaper only shows how important it is to us. The fact that we are not supporting Bay View financially in the same way that Bay View is supporting us, while at the same time we give unconditional support to the collect phone companies and canteen to the tune of billions each year, merely shows our shortcoming as a movement and, more important, why we need to step up to another level and organize nationally.

April has ended. May is here signaling that June is near, which means that, once again, it’s time to Redistribute the Pain 2018.

Book of the Month – June 2018: “Understanding the Assault on the Black Man, Black Manhood and Black Masculinity” (2017), by Dr. Wesley Muhammad, Ph.D.

Magazine of the Month: #BarzBeyondBarz 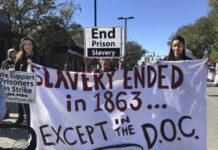 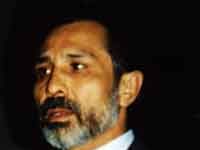 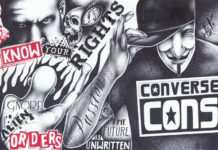 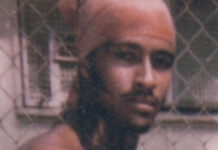 Censorship behind the walls