Utility companies throughout the state of California are working to ensure that an 811 hotline is as much in the forefront of people’s minds as another well-known three-digit number, but with the goal of preventing emergencies before they occur. The 811 hotline was established in 2005, but its roots date back to May 1975 when its creator, USA North 811, began operation.

It was later incorporated as a 501(c)(6) Non Profit Mutual Benefit Corporation in 1986. The Call 811 Before You Dig campaign message is being spread through television commercials, billboards, social media and workshops intended to educate local residents, agencies, business owners and those they hire for construction projects.

By calling 811, locals can learn how to prevent damaging underground infrastructure by finding out where they are and how to avoid them. Van Jackson, a damage investigator with PG&E’s Dig-In Reduction Team says it’s pretty easy for someone to accidently hit one of the company’s plastic underground pipes while digging.

“It doesn’t take much,” Jackson said.

Anyone who is planting, digging, excavating, drilling, trenching or grading is encouraged to call 811 before they start, whether it’s a big construction job done by contractors that requires excavators and backhoe type equipment, someone who is building a koi pond in their backyard with shovels and spades, or simply planting a tree or a flower bush.

The website, call811.com, uses the motto “Know What’s Below,” along with “Call Before You Dig,” and urges people to reach out each and every time they plan a new outdoor project that requires digging, even if the work area was previously marked. The site points out that erosion and root system growth can alter the depth or location of buried lines. The website also states that utility companies may have done work on their lines since the last time the area was marked.

“Every nine minutes in the United States an underground utility is damaged,” Jackson said. Typically, he adds, the spring and summer seasons see an increase in calls and incidents, referred to as “dig-ins,” because there are more people doing construction and starting home upgrade projects.

Each 811 call, or online message, must be made at least three days before an excavation project is set to begin. A USA (Underground Service Alert) ticket is generated and several agencies, members of USA North in Northern California or USA of Southern California, also known as DigAlert, are notified including local phone, water, sewer and cable providers.

The caller will be contacted typically within two business days after the call, by each entity that has infrastructure that could be impacted. Callers are then asked to mark the perimeter of their work area with white chalk, stakes or flags, as white is the universal color for proposed excavation. If folks don’t have chalk, stakes or flags, they can also use white baking flour they’ll likely have on their kitchen shelves.

Each utility company will come out and mark where their respective “facilities” are. Each is designated with colored markers that represent specific lines such as red for electric; orange for communications; blue for water; yellow for gas, oil and stream; and green for sewer or storm drain. Markings are typically located up to and not past the user’s service connection or meter.

Jackson says PG&E’s Locate and Mark Division utilizes maps and other equipment to make the location determination for those who call.

Incidents and accidents bring investigators like Jackson on the scene. He says of the 1,800 dig-ins PG&E responded to in 2017, half were a result of people not calling 811 before digging into the ground. The other half is attributed to factors such as failing to maintain the clearance PG&E set for them when they did come out. 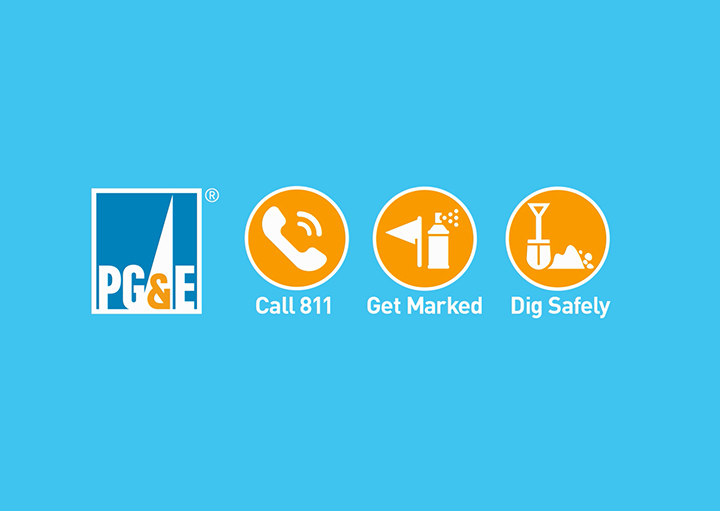 Not calling 811 can have costly consequences, including gas leaks, outages and personal injury. Worst case scenarios can see explosions and the loss of life and limb.

In September 2017, a construction worker was hospitalized in San Jose after hitting an underground power line while digging. Last month (July 2018), several first responders were treated near Madison, Wisconsin, after a contractor struck a natural gas main and caused an explosion.

“I haven’t seen any injuries and I’m hoping that I don’t,” Jackson said.

Accidents that occur as a result of not calling 811 first can also garner steep fines. One incident Jackson was called to investigate ended in a $5,000 fine being levied against a homeowner. While he says that is on the high end of the monetary sanctions that people can be subjected to, it should serve as a warning that it is better to call.

“Fines,” he says, “are determined after an investigation of the situation, the damage that is caused and the work that goes into repairing that damage.”

Safety and prevention are a vital part of what PG&E does, Jackson said. The company utilizes a team of investigators who travel throughout its service area, with an eye out for signs of excavation.

They also visit sites to determine whether or not homeowners and construction crews have called before starting their projects. As part of its outreach efforts, PG&E also provides workshops that are held at construction company offices and city facilities.

“That’s a major part in trying to minimize the actual damages and injuries to those who are out here doing these excavations,” Jackson said.

In addition to information on safety practices, there is also education for individuals on California Code 4216 that mandates prior notification of dig projects.

“A lot of folks have a misunderstanding that if they’re digging on their property, as a homeowner you’re not required to get a USA ticket,” Jackson said.

Jackson, who works in the Bay Area, says people have been receptive to the offered sessions.

In addition to those 90-minute workshops, PG&E also offers short videos online at www.pge.com on how to dig safely. There is no cost for calling 811 and having the utility companies come out.

The service has been expanded over the years to become a resource that is available 24-hours, seven days a week. Assistance is also available in several languages, which could eliminate some barriers to calling. Homeowners and contractors can also ask for assistance, generating their own USA ticket, by going online and logging onto 811express.com.

“Taking advantage of the 811 hotline,” Jackson says, “takes any guesswork out of the process.”