“Never believe that a few caring people can’t change the world. For, indeed, that’s all who ever have.” – Margaret Mead

Once upon a time … in a reality far, far away … Amy D.C. Brownell, PE, a licensed professional engineer with the Environmental Division of the San Francisco Department of Public Health (DPH), accepted the mandate to protect human health and the environment as a permanent regulator seated on the Restoration Advisory Board (RAB) of the Hunters Point Shipyard, a federal Superfund site.

RABs are democratically elected bodies created by Congress to empower community stakeholders with the opportunity to direct the cleanup and reuse of former military installations.

“The Department of Defense (DoD) is taking steps to increase public participation in its cleanup program. New DoD policy, which resulted from participation in the Federal Facilities Environmental Restoration Dialogue Committee, calls for Restoration Advisory Boards (RABs) to be formed at all closing installations where the local community expresses interest,” say the Implementation Guidelines at epa.gov/RAB.

As DPH regulator, Brownell argued in the 1995 Parcel A Record of Decision her “concern” about the hazardous risks of a child eating 30 pounds of fruits and vegetables grown at Parcel A each year. As DPH representative, Brownell delayed transfer of Parcel A for nearly a decade in a dispute with the Navy over residual lead contamination in soil above the California modified preliminary remediation goals of 221 mg/kg.

But in 2004, Brownell and DPH “rolled over” and signed off on the Finding of Suitability to Transfer for Parcel A, leaving lead in shipyard soils at clean up levels averaging 215 mg/kg.

What made Amy Brownell, PE, change? Perhaps a better question is who the hell is Amy Brownell … and why is she front and center in what has been called the greatest case of eco-fraud in U.S. history? 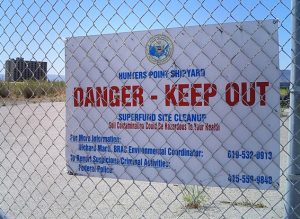 Fast forward to Aug. 15, 2018. It must have felt like deja vu to Amy Brownell at the Bayview Hunters Point Environmental Justice Task Force meeting in the Alex Pitcher Room of the Southeast Community College as she faced a rabble of angry activists, scientists and community members demanding her resignation. Webster’s dictionary defines a rabble as “a disorderly crowd or mob … the common people.”

Ten years earlier, in the exact same hearing room, the Hunters Point Shipyard RAB voted to “boot her off” her DPH regulator seat according to first hand witness Francisco Da Costa, who wrote:

“Amy Brownell, who has been sitting on the Hunters Point Shipyard Restoration Advisory Board for years, has never ever represented the community. She has represented the interests of corrupt politicians, developers and those who worship greed.

“Yesterday, Jan. 22, 2009, at 1800 Oakdale at the Southeast Commission Facility, Amy Brownell was booted off by Restoration Advisory Board members for not doing her duty and failing to represent the community. Six new RAB members joined the board yesterday and, judging from the business at hand, they all seemed to take their responsibility to the community very seriously.”

The Shipyard RAB was formed as a result of congressional legislation called the Base Realignment and Closure Act. The elected body had a volatile history of advocating on behalf of environmental health, justice, public safety and economic vitality of the Bayview community. Indeed, meetings of the RAB were originally held in the community room of the Bayview police station.

Congressman Ronald V. Dellums was the son of a West Oakland longshoreman. He chaired the House Armed Services Committee when the Base Realignment and Closure Commission elected to shut down bases in his district in the 1990s.

Later, as mayor of Oakland, Dellums presided over a re-use process that dragged on far longer than expected. On Sept. 15, 2008, Dellums told ABC7 news, “when it comes to a project of this size, of this magnitude, the pace of the redevelopment should not be a top priority.”

The National Contingency Plan regulates the cleanup of a federal Superfund site. It establishes “community acceptance” as one of its principal criteria. On Nov. 7, 2000, 87 percent of the San Francisco electorate voted in support of Proposition P, a declaration of policy calling for environmental cleanup of the shipyard to residential standards to enable its unrestricted use.

Proposition P was the “brainchild” of the Community First Coalition, an umbrella organization of Bayview Hunters Point environmental activists, community representatives and non-profits committed to cleanup of the shipyard to the highest standards.

Frank Herbert, author of “Dune,” once said, “The highest function of science is the understanding of consequences.” This quote rang through my head as I attended the Health Commission hearing on Nov.16, 2004, in which Article 31 of the Hunters Point Shipyard was adopted during the transfer of shipyard Parcel A.

As a former physician specialist with DPH, I saw the writing clearly on the wall. Article 31 was a “cash cow.”

Adopted as an ordinance by the Board of Supervisors on Dec. 14, 2004, during the transfer of Parcel A, Article 31 contains the “poison pill” of developer fees for construction and excavation activities generating more than 50 cubic yards of soil.

Brownell initially received $153 per hour in consulting fees under Article 31 from Lennar, but in 2010, the Health Code was amended to include the entire shipyard and the formula allows Brownell to demand $197 in hourly consulting fees.

Time and money changed Amy Brownell and radically altered the mission of the San Francisco Department of Public Health from protecting public health to fierce protection of its fiduciary investment in Lennar at the Hunters Point Shipyard.

DPH Director Rajiv Bhatia issued the first of a series of notices of violation for failure to comply with dust control measures in a 2007 letter to Kofi Bonner of Lennar/BVHP LLC. But acting out of conflict of interest with Lennar, DPH stopped posting air monitoring data from community air monitors detecting astronomical exceedances in asbestos levels.

Amy Brownell argued the exceedances were generated by trucking routes from Navy operations and could not be used to shut down the developer. Lost in Brownells’ argument were the human health and safety consequences caused by neglected exposure to toxic dust.

The incident was amplified by emails obtained by the SLAM coalition under the Freedom of Information Act, documented a successful conspiracy by Brownell and Ripperda to shut down the HV12 community monitor overlooking Parcel A and develop talking points to keep Lennar’s development project rolling:

“I’m sure you will also want to change my wording on how I portray the problems, lack of monitors, etc.,” wrote Brownell in an email to Sheila Roebuck and Jeff Austin of Lennar on Oct. 13, 2006. “Go ahead and change any way you want. I may change some of it back but I’m willing to read your versions.

“As noted, don’t bother adding the worker monitoring information. I don’t want to use it. I understand your sensitivity on this issue and if specifically asked in a public meeting, I will be willing to verbally state the facts related to worker monitoring.

“But I’m not willing to make it part of this narrative.”

Fueled by outrage at DPH efforts to conceal the asbestos exposures, on Jan. 22, 2009, the Shipyard RAB voted to remove Brownell as DPH regulator from her permanent seat.

In September of 2009 the Navy retaliated by dissolving the RAB citing multiple reasons, but in two separate clauses referenced the vote of no confidence in Amy Brownell as justification:

On June 23, 2011, the San Francisco Board of Supervisors held a hearing on the ethics of the Department of Public Health and Lennar after more than 30 environmental justice organizations from around the country signed a letter to Environmental Protection Agency Director Lisa Jackson calling for the removal of Mark Ripperda as EPA Region 9 remedial project manager for the Hunters Point Shipyard for his involvement in a series of emails beginning in 2006 between Ripperda, Brownell and Lennar representatives documenting criminal conspiracy to manipulate facts, conceal health risks due to asbestos exposure and present false claims about the safety of the project to support Lennar’s redevelopment plan.

Mark Ripperda was removed from his position. There was no accountability from DPH in the call for the removal of Environmental Engineer Amy Brownell despite the findings of the 2010 Civil Grand Jury on the Hunters Point Shipyard.

“The type of construction dust generated at the shipyard is common across California and was expected. The area is not contaminated with unsafe levels of chemicals,” wrote then SF DPH Director Mitchell Katz, MD, in a 2006 unsigned letter to residents of 94124 zip code.

Mitch Katz resigned as director of the San Francisco Department of Health in 2010 under pressure from the Health Commission in the aftermath of the grand jury report documenting the conflict of interest between DPH and Lennar over developer fees exacted under Article 31 of the Health Code.

Who the hell is Amy Brownell?

Wherever Amy Brownell goes…people demand her resignation! Brownell is the subject of an open investigation by the California Board of Professional Engineers and under supervision by the Health Commission.

On March 30, 2018 an EPA report found 93% of soil samples on shipyard parcels transferred to the city and county of San Francisco in 2015 were flawed by “potential falsification, data manipulation and data quality concerns.”

The parcels in question border former Parcel A where families are housed according to Public Employees for Environmental Responsibility Executive Director Jeff Ruch. Ruch obtained the EPA report under the Freedom of Information Act and states, “Documents emerging in recent weeks show the radiation testing on soil covering most of the shipyard and it’s buildings are inaccurate and utterly useless from a public health standpoint.”

The possibility Amy Brownell, PE, may have participated in the fraudulent clearance of the SFPD Crime Lab located in Building 606 on radiation contaminated Parcel E could prove to be the proverbial “straw that broke the camel’s back”

According to San Francisco Examiner, the Aug. 17, 2018, Police Commission acted “out of an abundance of caution” for dozens of officers stationed at Building 606 at risk for toxin and radiation exposure despite decades of assurances by DPH the site is safe.

Deputy Chief Robert Moser announced the department has called for “retesting of water, soil and air quality for biological, heavy metal, petroleum based and radiological contaminants.” Moser confirmed testing of the building and surrounding area was conducted by DPH and deemed its water safe for consumption despite notification sent to the Redevelopment Agency in 1997 documenting lead and toxins in drinking water on the base. Brownell was notably absent from that hearing. It is customary for city departments to send representatives to publicly noticed commission hearings when department matters are on the agenda.

Earlier that day, Brownell presented a letter from the EPA affirming the agency stance the shipyard does not pose a threat to human health to an unreceptive “rabble” of attendees of the Bayview Hunters Point Environmental Justice Task Force.

Brownell’s “stoicism” in face of the avalanche of outrage and cacophony of demands for her termination may be grounded in the fact she is reimbursed $197 an hour by Lennar and has a monetary incentive to defend and protect the developer.

Brownell’s resilience in the face of a decade of hard evidence documenting her conspiracy in the commission of eco-fraud at the Hunters Point Shipyard is anchored in the fact she is indispensable and essential to its cover-up.

Amy Brownell has – for 25 years – been the face and voice for what is now being called “the greatest case of eco-fraud in U.S. history.” And in her own words, “We’re going to keep on doing what we’ve been doing!”

30,000 respondents offer a complex picture of race and gender with serious implications for the 2020 election