Who is Thomas Porter?

Thomas Porter is a 42-year-old Black man held on Virginia’s Death Row for the Oct. 25, 2005, shooting death of a Norfolk, Virginia, cop, for which he was charged, tried and convicted of capital murder.

His is a case that warrants close and broad public attention and action.

At his trial, it was undisputed that the cop walked up and grabbed him around the throat without warning, then tried to throw him to the ground. Thomas reflexively pushed the cop back, asking what he was doing. Without warning or explanation, the cop pulled his gun and fired on Thomas but missed.

In a split second reaction, Thomas pulled and fired his own gun, fatally hitting the cop in the head – a clear case of self-defense. And particularly so, where the long-standing epidemic of U.S. cops murdering Black males is now common knowledge.

But of course no laws recognize the murderous impunity of police towards men of color, nor any right to defend one’s life against such violence. Consequently, Thomas was convicted and sentenced to die for defending from being murdered by a cop.

Now contrast his treatment with the recent “stand your ground” murder of a Black man, Markeis McGlockton, outside a Clearwater, Florida, convenience store.

On July 19, 2018, Markeis was in the store with his 5-year-old son. When he came out, he observed his girlfriend and two other children being harassed by a white man, Michael Drejka, because they were parked in a handicapped parking spot. Markeis confronted Drejka and pushed him away from the car. Drejka then pulled a gun and killed Markeis, who was unarmed and was walking away.

Florida officials declined to prosecute Drejka, finding that Florida’s “stand your ground” law (the same that exonerated Trayvon Martin’s killer) allowed Drejka to “defend” himself – despite [the fact] that he’d previously threatened to kill another Black man over a disputed parking spot.

In Drejka’s case, a white man killing an unarmed Black man who pushed him – because he was menacing his family – and walked away, was justified “self-defense,” but not so in Porter’s case, where a Black male (a member of a social group routinely targeted for police murder) killed a cop who attacked and tried to shoot him without warning, provocation, reason or explanation. Instead, Thomas was prosecuted for capital murder and sentenced to death.

At trial, Thomas explained his response to being attacked by the cop. He described a lifetime of witnessing cops menace, brutalize and murder Black men, and his very real fear of suffering the same fate at the hands of a cop who sneak-attacked and in fact tried to kill him. All to no avail.

This because in Amerika the police have assumed the role of violent impunity, containment and terror against Blacks that was previously exercised by slave patrols during the antebellum era, and by the Ku Klux Klan and similar white terrorist groups during the period of Jim Crow, against which Blacks were forbidden to defend or resist.

How many Black and Brown males in Amerika would still be alive if they’d had the presence of mind to defend themselves against murderous police attacks? But, like lynchings, cases like Porter’s are meant to vindicate a corrupt system and deter Black and Brown self-defense. To send a message that in Amerika people of color must submit to the whims of murderous police.

Like in the recent cop murder of a 31-year-old Black man, Thurman Blevins, who was gunned down by Minneapolis, Minnesota, police on July 23, 2018, as he fled in fear for his life while begging not to be shot. And of course prosecutors quickly announced that the cops who killed him wouldn’t be charged.

Before I met Thomas Porter (when VA prison officials devised to house me on Death Row since July 10, to isolate me from others even though I have no death sentence), I had the opportunity to read rulings and pleadings in a federal lawsuit he’d brought challenging Virginia’s holding its death row prisoners in permanent solitary confinement.

His suit brought about the eradication of solitary on Death Row in VA and set a standard to be followed in other solitary confinement cases (See Porter v. Clarke, Case No. 16 – 7044 [U. S, Appeals Court, 4th Circuit, March 24, 2017]).

Before filing the case, Thomas was warned by attorneys that he’d likely suffer retaliation by prison administrators and a rush to carry out his death sentence. In the interest of asserting the rights of all Virginia’s death row prisoners, Thomas “stood his ground.”

He filed the lawsuit and won the changes he sued for. As a result, he was met with the very retribution he was warned about – he has suffered repeated physical abuse at the hands of officials, and at the time of the writing of this article, he expects an execution within two or three months. Yet he has remained undeterred.

One can only admire his backbone and tenacity, in the face of repeated attempts to take his life, first by a murderous cop, and then by the state for protecting his own and others’ rights to live and to humane treatment.

The fight for one’s basic human entitlements, especially to defend one’s life, are among the most fundamental human rights. And those who uphold this right, as did Thomas Porter, in a society like Amerika, which violently forbids these rights to those it continues to subject to brutal containment and oppression, are heroic in their own right.

Such a system should not be allowed the second chance to murder Thomas Porter, nor to validly criminalize Black and Brown self-defense against murderous police.

Dare to struggle – Dare to win! 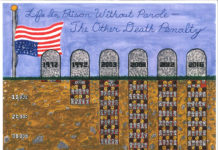 LWOP (Life in Prison Without Parole): Dreams derailed or deferred 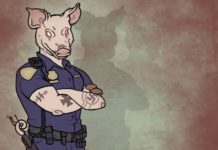