Political prisoner Mike Africa Sr. was finally released on Oct. 23, after more than 40 years in prison. He is one of the MOVE 9 who were unjustly convicted and sentenced to 30 to 100 years in prison following the 1978 police attack on the MOVE organization in Philadelphia.

With son Mike Africa Jr., he made his way straight home to Mike Jr.’s house after leaving SCI Phoenix. Waiting for them was MOVE 9 member Debbie Africa, Mike Sr.’s spouse, who had been released this June 19. The five other members of the MOVE 9 remain in prison, supported by legal and people’s pressure for their release.

In an August interview on Democracy Now, alongside his mother, Debbie, Mike Jr. spoke of his father: “My father was my first hero. My father is Mike Africa. Oh, man, to be his son is one of the biggest honors that I’ve ever had to experience. I just like thinking about him and the kind of person he is and the effort that he puts into being right and the love that he has for his family.”

A major story in the London Guardian quotes Mike Sr.: “I’m ecstatic coming from where I was just a couple of hours ago. I wasn’t convinced in my mind that this would happen until I walked out the prison gates.”

Political prisoner Mike Africa Sr. was finally released on Oct. 23, after more than 40 years in prison. He is one of the MOVE 9 who were unjustly convicted and sentenced to 30 to 100 years in prison following the 1978 police attack on the MOVE organization in Philadelphia.

The Guardian writes: “Mike Africa Sr.’s parole is of even greater consequence for his family, and especially for his son Mike Africa Jr., who for 40 years has never seen both of his parents together or out of prison. He was born in a cell where his mother Debbie gave birth to him a month after she and her husband were arrested during the siege.

“For three days Debbie kept her baby son concealed in the cell, hiding him under the covers, until she was forced to hand him over to prison guards. With both parents imprisoned until the eve of his 40th birthday, Mike Jr. effectively became an orphan of the Black liberation struggle.

“He was raised by relatives and other members of Move and now lives with a family of his own outside Philadelphia.

“‘I’m having an out-of-body experience right now,’ Mike Jr told the Guardian as he drove his father back to his home to be reunited with Debbie. ‘I’m floating over the top of the car.’

“He said that this as what he had waiting for more than four decades – to be together for the first time with both his parents. “I’ve always hoped for this, but I never knew that it would happen,” he said.

In more good news from MOVE, the Campaign to Bring Mumia Home reports that MOVE leader Ramona Africa is in full remission from cancer, after being hospitalized since August.

Joseph Piette is a staff writer and photographer for Workers World, where this story first appeared. Bay View staff contributed to this story. 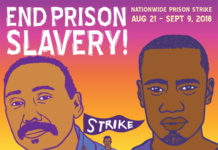