I’m writing to bring awareness to the current problems we face at 850 Bryant St., on the Seventh Floor in the San Francisco County Jail.

Not only for months do the toilets constantly overflow, causing us to have to smell fecal matter all day, but also they serve us dinner at 3:30 p.m. every day but let the trays sit in the hallway for two hours before we receive them, so we have only cold food every single meal.

Now, in addition, when it rains, the roof leaks rusty water on my bed. I’m in the Seventh Floor dorm C-1. We’ve asked many times for the leaks to be fixed, and we’re told they put in a work order. “We were going to fix it, but our ladder wasn’t long enough,” one deputy told me.

I pray it doesn’t rain so I don’t have to wake up wet tonight. We never know what the weather is because there are no windows on this floor. They haven’t let us outdoors for fresh air and exercise since October.

I pray it doesn’t rain so I don’t have to wake up wet tonight.

Recently, when I was sent to the SF County Jail at San Bruno for a couple of days, then taken to court and returned to the same dorm, Seventh Floor C-1, all my property was lost. I wrote requests on the appropriate forms and received no response or help. All my food and hygiene products are gone, canteen is a week away and I have no money.

May God hear my prayers.

Should decrepit SF Jail be replaced, prisoners housed in Alameda County or can San Francisco lead the way to end mass incarceration?

The future of the San Francisco County Jail is still hotly debated. A proposal to build a new jail was rejected after a vigorous campaign of opposition in 2015, but is resurfacing.

At the time, London Breed, now mayor, was president of the Board of Supervisors and came down solidly on the side of “no new jail.” “Board President London Breed advocated for the cause, believing that instead of building new jails the city needs to focus on putting money towards programs that address mental health and addiction,” reports Wikipedia.

Many question whether the fact that the building at 850 Bryant is seismically unsafe is sufficient reason to spend $300 million or so to replace it.

The future of the San Francisco County Jail is still hotly debated.

“’Even without the threat of natural disasters, jails and prisons are unsafe regardless of how well the building is constructed,’ said Nick DeRenzi,” according to a recent post on the Facebook page, No New SF Jail Coalition, which continues: “’The people who arrest and cage our community members inside’ of the jail – the SFPD and sheriff’s officers – ‘are as deadly to people of color, homeless individuals and folks with psychiatric disabilities as any earthquake,’ DeRenzi said.”

A SF Weekly story headlined, “Argument Continues Over Decrepit Hall of Justice’s Future,” reports: “An average of 1,342 people sit in our county jails on any given day. Of those, around 300 are in 850 Bryant St. Predictably (and unfortunately), the latest round of data shows that the majority of people occupying beds in San Francisco County jails are young Black men.” 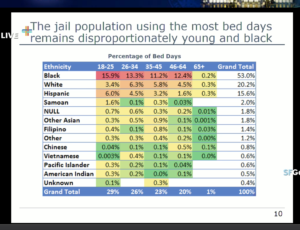 Clearly, the future of San Francisco’s Black community is at stake. Will community leaders familiar with issues of incarceration and with incarcerated and formerly incarcerated people have a seat at the decision-making table?

Will community leaders familiar with issues of incarceration and with incarcerated and formerly incarcerated people have a seat at the decision-making table?

The option of housing San Francisco prisoners in jails in Alameda County has been raised. Here is the response of San Francisco’s elected Public Defender Jeff Adachi, a letter he wrote on Nov. 2 to San Francisco Mayor London Breed with copies to the Board of Supervisors, that also outlines some cogent suggestions for better ways to resolve the problem:

“It has come to my attention that you may be considering approving the transfer of some inmates from the SF County Jail, many of whom are our clients, to Santa Rita or Glen E. Dyer Jails in Alameda County. Although I am keenly aware of the poor condition of SF County Jail #4 and the need to close it as soon as possible, I urge you to reject the proposal to transfer people to Alameda County.

“My staff and I visit clients at County Jail #4 on a daily basis, and can see for ourselves how inadequate and potentially dangerous that facility is. But, the option of transferring our clients to Alameda County is much worse. There are many reasons for this:

“Legal representation of our clients. The San Francisco Public Defender’s Office prides itself in having the highest standards of criminal defense, not just among public defenders, but among all criminal defense attorneys. But we cannot provide excellent service to our clients without access to them. Our staff of 103 attorneys need to meet with our in-custody clients regularly to develop their defense. At present, we visit our clients around the corner at Seventh and Bryant, and also must travel to the San Bruno Jail. Having to travel to Dublin and Oakland as well would mean much more travel time for attorneys and travel expense for the City, and, because our attorneys already have large caseloads, compromised defense for our clients. I was working as a Deputy Public Defender in the early 1990s when San Francisco, for a brief time, housed clients in Alameda. I can personally attest that it was a disastrous decision which was reversed after just a few weeks, since it was impossible for clients to be properly represented by our attorneys.

“Access to families and loved ones. There is an overwhelming consensus that having strong community, family and support systems correlates greatly to lower recidivism and better outcomes in general. All of our clients are indigent, and traveling to Dublin will be a hardship for their families and communities. This will result in less contact with support systems, faith communities, mentors etc. and ultimately poorer outcomes for our clients. Children will have less contact with their incarcerated parents, causing trauma for them. In fact, the lack of family contact and community support will inevitably convince more clients to plead guilty in cases they could have won, just to get back to their loved ones.

“Risk of illegal entanglement with Immigration & Customs Enforcement. San Francisco is a Sanctuary City and all government departments, including our Sheriff’s Department, are committed to this policy. Sadly, the same cannot be said for the Alameda County Sheriff. Noncitizens there are routinely apprehended by ICE upon their release from Santa Rita and then subjected to indefinite detention and deportation – even if the non-citizen is ultimately acquitted of the charges against them or if those charges are dropped. San Francisco should not contract with any facility, such as Santa Rita, that has such an abysmal track record of colluding with ICE and its deportation machine.

“The Alameda County jails are notoriously plagued by abuses and substandard conditions. Besides the additional cost of sending people to Alameda, San Francisco will expose itself to lawsuits from inmates and civil rights advocates. Just within the past year and a half: 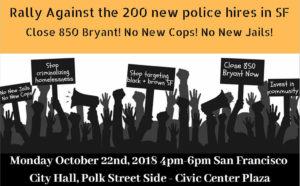 “San Francisco does not need to send County inmates to Alameda. There are better solutions:

“Release people who are eligible for bail. The California Court of Appeals in the Humphrey decision said that no one should be held in jail pretrial just because they cannot afford bail. Yet over 80 percent of the San Francisco jail population is being held pre-trial. Hundreds of these people are bail-eligible yet are being held in custody, because San Francisco has among the highest bails in the country. The Humphrey decision also held that the court should consider the least restrictive release conditions necessary to ensure public safety and a return to court. A wide array of release conditions is available here in San Francisco. The court or the sheriff should make use of these options to release anyone to Pretrial Services who is bail-eligible.

“Prioritize Public Health treatment beds over jail beds. According to DPH’s presentation to the Work Group to Re-envision the Jail, an average of close to 200 people on any given day are sitting in SF County Jails waiting for transfer to behavioral health facilities. According to the DA’s presentation at the same meeting, individuals in Behavioral Health Court wait in jail an average of 120 days waiting for a bed in the community. The County must commit resources to getting people out of jail who need treatment. Both DPH facilities and community providers should be utilized. Jail is the worst possible place for people suffering from mental illness and substance abuse problems.

“Provide supportive housing rather than cycling the unhoused in and out of jail. By all accounts, more than a third of the people in County jail at any time are homeless at the time of arrest. Many more are made homeless by their incarceration. The jail is an inappropriate, harmful and expensive solution to San Francisco’s homelessness crisis. People living on our streets need appropriate supportive housing, not jail beds.

“San Francisco needs to be at the forefront of the movement to end mass incarceration. We need to stop dealing with poverty and public health problems by throwing people in jail. Neither building a new jail nor moving people to a substandard jail in another county will solve these problems. San Francisco needs to lead the way on this issue.

“Thank you for your consideration and I look forward to continuing to work with you on criminal justice reform.