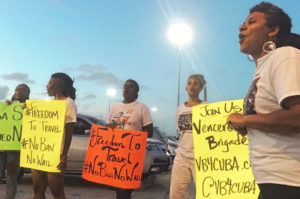 If you’ve seen the videos or even joined protests when police murdered Oscar Grant or countless other people of color; if you’ve seen border guards ripping children out of the arms of their parents who are desperate to escape violence and poverty; if you’re disgusted with our government that steals for the rich, promotes white nationalism and war and degradation of women, that threatens the environment, it’s easy to be angry and discouraged. You may not believe the politicians who buy their way into office or the media that serves them, but what can you do about it?

For five decades, people across the U.S. have been travelling to Cuba on Venceremos Brigades. They’ve defied travel bans to see first hand how the Cuban people are building a society where gross inequality and exploitation are gone, where all health care, childcare and education are free. They’ve met with ordinary Cubans who enthusiastically travel overseas whether it’s to defeat apartheid or the ebola virus.

For five decades, people across the U.S. have been travelling to Cuba on Venceremos Brigades.

Nesbit Crutchfield was a leader of the Black Student Union and the 1968-9 student strike at San Francisco State which established the Ethnic Studies College there and inspired struggles for Black and Latinx Studies nationwide. Recently he recalled his time with the Venceremos Brigade.

“I was brought up as a curious Black man with the attitude: Be smart, go to school, and use that education to advance myself and to basically look out for myself … (even though he was a militant in the Black Liberation Movement of the 1960s and ‘70s). Before going to Cuba I thought that much of the change or revolution that we were talking about was a theory. It was a fantasy to me …

“But when you go to Cuba, a place where you see the revolution in a viable, living state, you realize, my god, this is reality. It can be done and we’re capable of it.

“It blew my mind, to work with the Cuban people who lived their lives on the basis of beautiful principles. Those principles taught them to deal with people as human rather than as some objects to be used by a capitalist system … That knowledge has followed me for nearly 40 years.

“One of the things I did not realize until I got to Cuba is how overwhelmingly Cuba is a Black and Brown nation … It’s a mind blowing experience for you to go to a place and see all these folks who look just like you. …

“I think that especially for young Black and Brown women and men it’s so refreshing to see people looking like you actively participate in change, growth, genius, creativity and hope. They have a feeling of belonging that one does not have here.”

The Venceremos Brigade invites you to learn more about the Brigade, which will be travelling to Cuba this summer. The deadline for applications to participate in the 50th Anniversary Brigade is March 1, 2019. For more information, including travel dates, go to https://vb4cuba.com and https://www.facebook.com/50VBBayArea/.

Arlene Eisen, who researched and wrote the landmark report commonly known as “Every 28 Hours,” officially “Operation Ghetto Storm: 2012 Annual Report on the Extrajudicial Killings of 313 Black People by Police, Security Guards and Vigilantes,” can be reached at arlene_eisen@sbcglobal.net.

On the anniversary of Mandela’s release, South Africans still struggle for liberation

The facts: How Israel orchestrated the real Geneva ‘hate fest’ against Black and Brown people