The City and County of San Francisco is moving to privatize thousands of jobs through the EPIC program and the LEAN plan while outsourcing city jobs to non-union low paid workers.

Part of this outsourcing drive is taking place at the pharmacy at San Francisco General Hospital, renamed Zuckerberg, where the Department of Public Health management and San Francisco Human Resource Director Micki Callahan are intent on more privatization and outsourcing for more profits.

The City has pushed for privatization of the entire hospital and renamed it the Zuckerberg Hospital despite opposition by City workers and the community. Top City officials and executives want to turn it into a privatized revenue producing operation instead of a public hospital and community healthcare center for the poor and working people.

Speakers will report on who is doing this privatization and what the cost to the city and health system will be. This outsourcing is escalating and is also taking place in other hospitals, including Highland Hospital in Oakland and the threat to outsource pharmacy jobs at Kaiser.

This is combined with attacks on whistleblowers and a racist workplace bullying attack on African American and other minority workers as well as senior workers. African American workers, many of whom testified at Board of Supervisors hearing who are being illegally harassed and terminated out of their jobs for more profiteering by the privatizers while millions more dollars are being spent on consultants.

The San Francisco Labor Council has also called for an end to privatization and the bullying of CCSF DPH workers and other workers. Read their resolution below.

Steve Zeltzer and United Public Workers for Action can be reached at www.upwa.info. Listen to his WorkWeek Radio show every Tuesday at 3:30 p.m. on KPFA.

SF Labor Council: Resolution to Stop Racism and Privatization/Outsourcing of Public Services in the City & County of San Francisco

Whereas, the Sept. 19, 2018, San Francisco City and County Board of Supervisors’ audit hearing testimony showed that there are many instances of racial discrimination, bullying and harassment of City workers; and

The San Francisco Labor Council has opposed the systemic racism and discrimination in the City and County of San Francisco; and

Whereas, the City and County of San Francisco has paid over $70 million in settlement payments to workers illegally removed by bullying, harassment and termination and attorney costs and,

Whereas, the hearings show that there is systemic racism, discrimination, bullying and illegal retaliation; and

Whereas, those managers who engaged in this illegal discrimination and retaliation were not held accountable and disciplined and continue to work for the City and County of San Francisco and,

Whereas, if there is no accountability for discrimination and illegal terminations this activity will continue unabated; and

Whereas, the director of Human Resources Micki Callahan has failed city employees and the residents of San Francisco; and

Whereas, this outsourcing and privatization of public services is part of a national campaign to destroy unions and the labor movement; and

Whereas, this leads to temporary part time workers and a decline in the quality of services and lack of accountability of these public services; and

Whereas, this allows further discrimination and illegal retaliation without the protection of civil service and due process; and

Whereas, as a result of a labor and human rights campaign SEIU 1021 San Francisco Department of Public Health steward and healthcare worker has won her job back at the Potrero Hill Health Center; and

Whereas, the Potrero Hill Health Center faces continued threat of closure and privatization as well as other community healthcare centers,

Therefore Be it Finally Resolved the San Francisco Labor Council supports the call of SEIU 1021 SF General Hospital Chapter to rally on a date to be determined on the Human Resources at 1 South Van Ness in San Francisco.

This resolution originally appeared at http://sflaborcouncil.org/wp-content/uploads/2018/11/11-26-18Resolution-to-Stop-Racism-and-PrivatizationInSF..pdf. 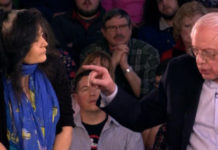 Open letter to Daily Kos: No name calling; we may need your ‘morons’

Against all odds: Teens advocate in the rain for disability rights & to redefine ‘beauty’